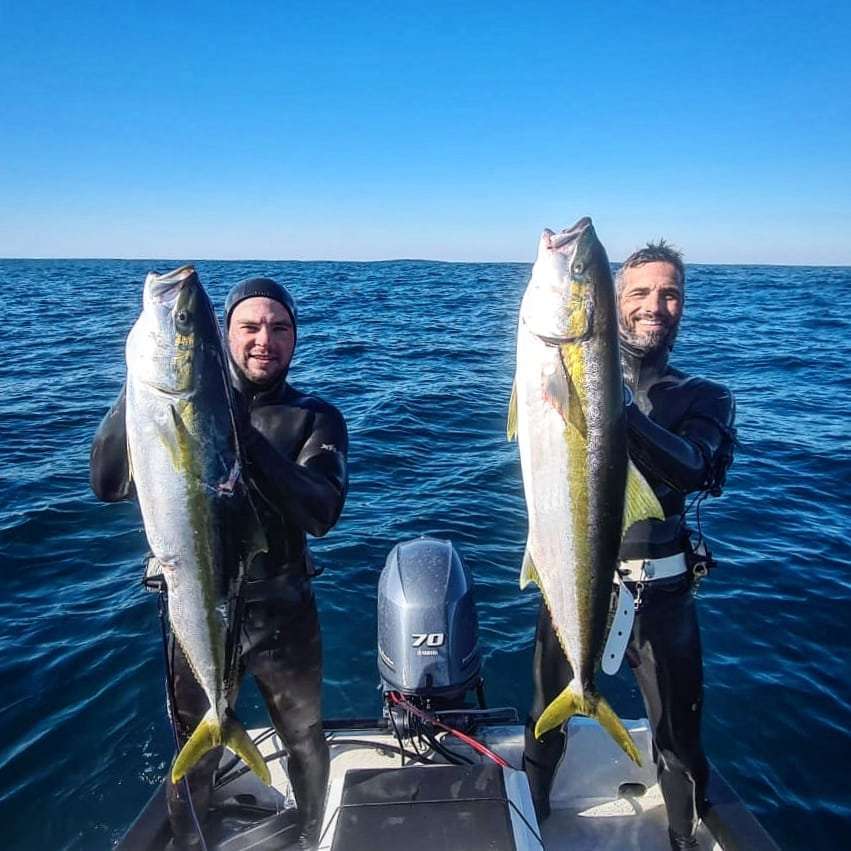 Results of the 3 days of competition

The 2022 South African Spearfishing Nationals took place between the 5th and 11th of June in Gqeberha. In 2019 the title was won by the amazing champion Jaco Blignaut. This year has been a great success with 42 athletes participating. Guy Le Meme won the competition, his maiden national championship. Behind him Gerhard Vosloo in second place, and third the local Eastern Cape spearo Don Naested. NKwazulu Natal took top honors in the A division, Western Province, taking the B division, while the Eastern Province won the Veterans division. Individually, Angelo Spada won the veterans category and Nick Stowe won the Junior category. Gerhard Vosloo won day 1, Robert Moreland won day 2 and Don Naested won day 3. The biggest fish was a yellowtail kingfish of more than 14 kg caught by Protea spearo Gerhard Vosloo.

The competition of the 2022 South African Spearfishing Nationals consisted of three dive days with a rest day in between. The conditions varied in the different areas grew the challenge. Visibility was between 4 and 6 meters in places along with a reasonable swell on day 2 and a coolish 17 degree water temperature. Some amazing fish were captured and every spearo made it back safely ashore, which was most important.

“I believe it has been mainly a matter of consistency in winning the 2022 Championship”, commented Guy Le Meme. “I aimed to reach every day ten fish to be constant. Some problem I had was when I got my fin bit by a Raggy (Ragged Tooth Shark) and lost the fin. We also got bumped by a great white shark on day 1 in the bay, three punctures in our trailer, fish-finder not working on day 2 and had to go and get another flown in from Durban. So competition was a little bit tougher than expected. I had the plan not to dive in the bay on day 1 because I wanted to stay away from the local knowledge, but it did not go that way. In day 2, as said, the fish-finder did not work, so I dove “blind”. That was by the way the day when I caught the biggest fish, a grey banky, at about 31 meters of depth. It was the best spot of the competition, but we could dive there only 20 minutes before before the thermocline and black water arrived.”

Thanks to the Organizers and Sponsors

Congratulations to all participants as well as boat drivers of the 2022 South African Spearfishing Nationals, who ensured the safety of their athletes whilst in the water. A special mention must go to Noordhoek Ski Boat Club and those who worked tirelessly behind the scenes to make the event a success. A big thanks to Corry Versluis, Don Solomon, Angelo Spada and Derek Dunning for all their efforts with the weighing of fish and capturing of data after a hard days diving. Also a thank you to the sponsors, such as Rob Allen, Freedivers, Rabitech, Karen and Leonard van Wyk from Affinity Real Estate who sponsored the bottled water.