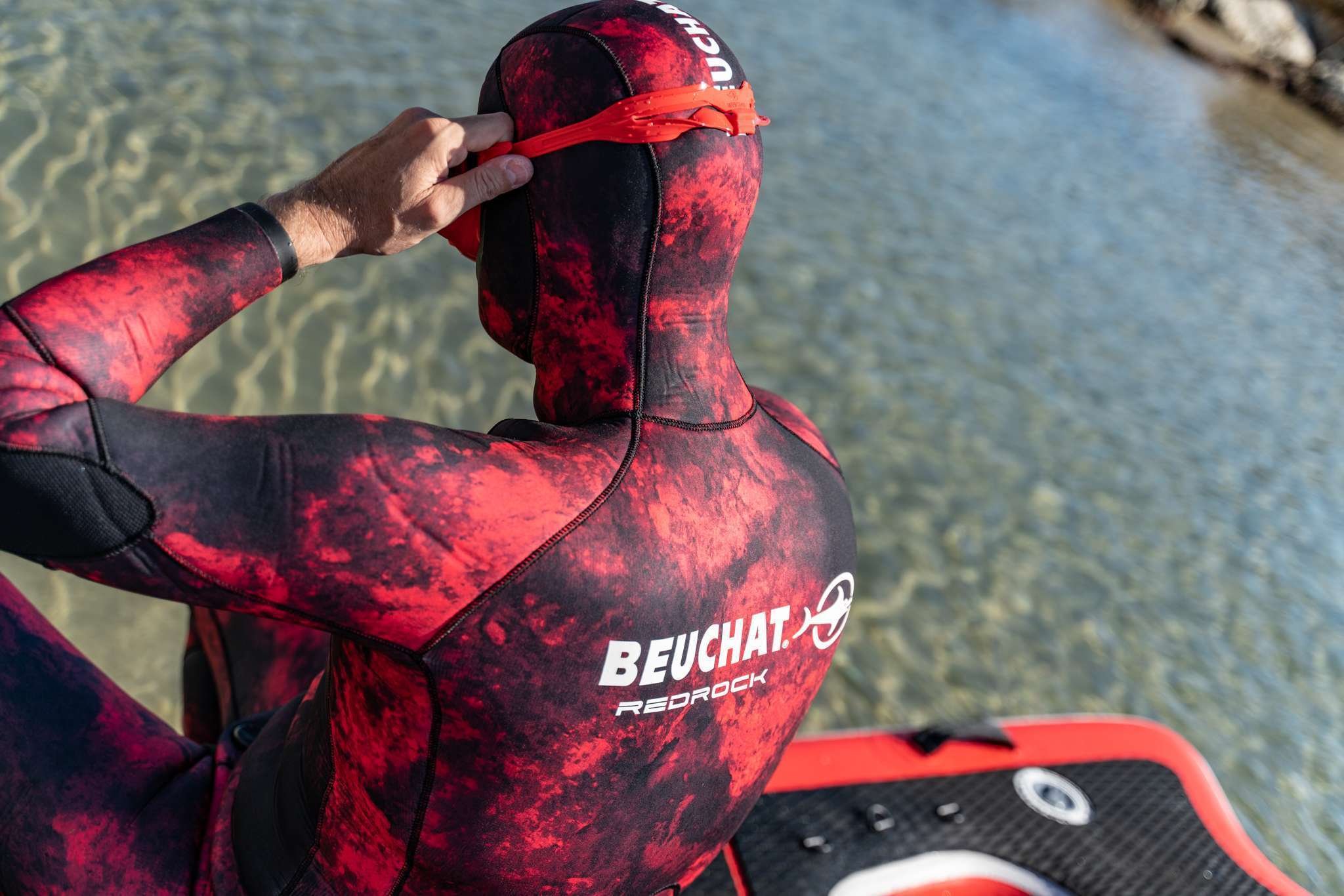 Beuchat has definately in its wetsuit know-how one of its strongest assetts, and with the Beuchat Redrock the French company offers a red camouflage solution based on Trigocamo Wide and a black frame to further break up the spearo’s silhouette, enhancing the canìmouflage based on the image decomposition solution.  In addition, red has the ability to fade in grey with depth.

The Beuchat Redrock wetsuit is designed with eco-friendly neoprene as this is made mainly from a natural element, limestone. It is open cell inside for best warmth, and lined externally with a Nylon based material, Elaskin X8.6, one of the key Beuchat solutions putting together good resistance and very high elasticity (the latter indicated by the number 6, where for Beuchat 8 is the maximum value utilized with the Beuchat Espadon Prestige).

Very important protections are present on the knees and elbows areas, with Nylon Supratex 2 reinforcements, while the chest area has an internal additional neoprene patch (16 cm wide x 26 cm high), and externally is covered with a fragmented design polyurethane layer that contemporarily increases grip and avoids the slipping of the butt of the speargun when loading, and is not too rigid as it would be if it was one single solid piece. 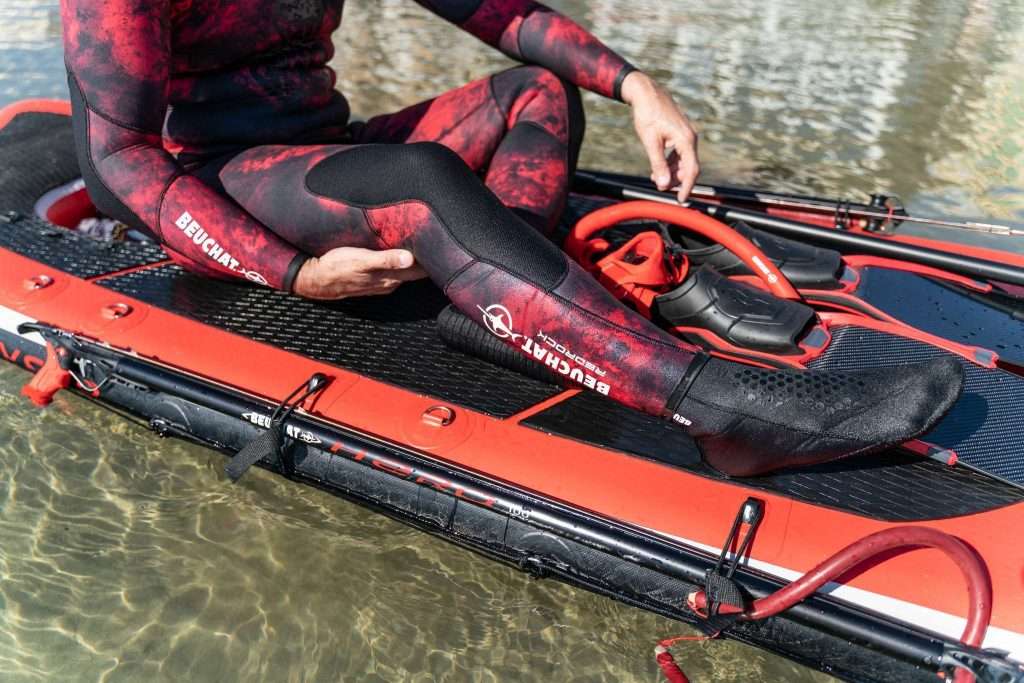 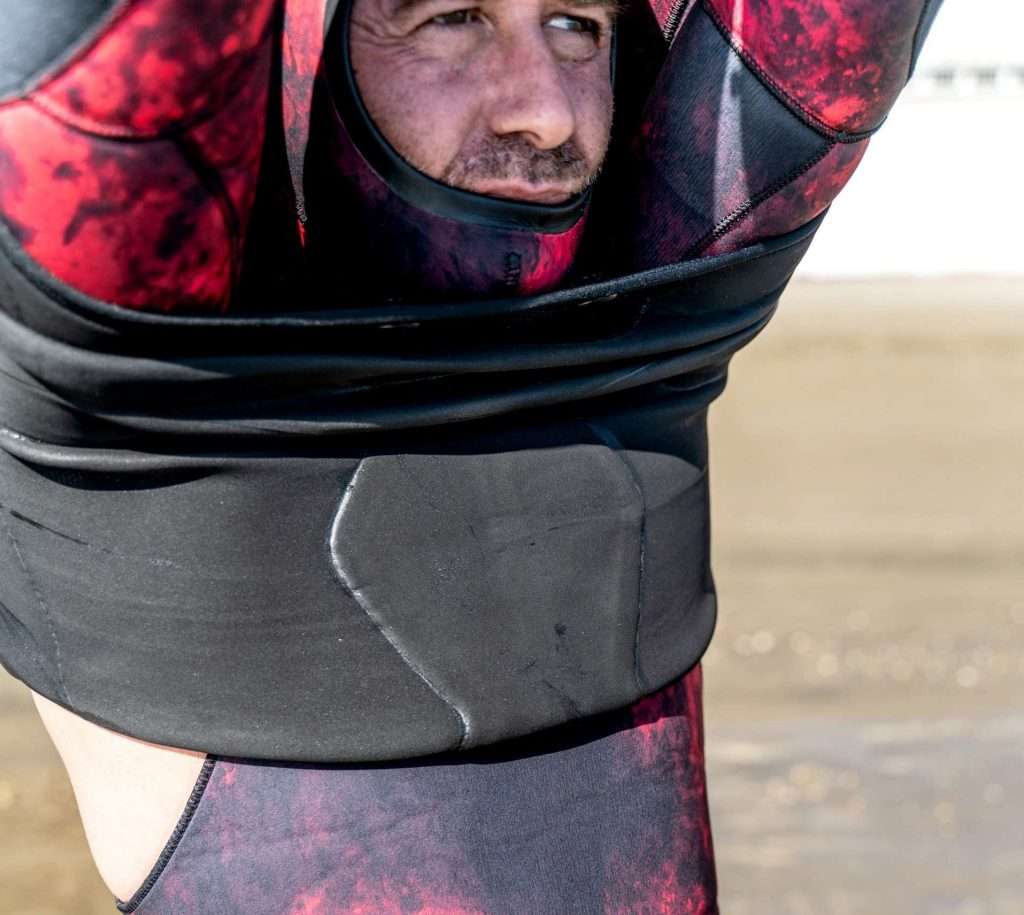 On the finishes side the Beuchat Redrock is particularly refined. The face, wrists and ankles profiles are made with a very soft folded smooth exterior neoprene, which offers best adherence and sealing, and also better resistance when dressing and undressing, compared to the simply cut neoprene solution. The profiles are simply glued and have no internal stiching for better comfort. An even greater detail is the face contour which is 360° one-piece for improved comfort (chin area is completely smooth with no stitchings nor bondings), water tightness and durability. 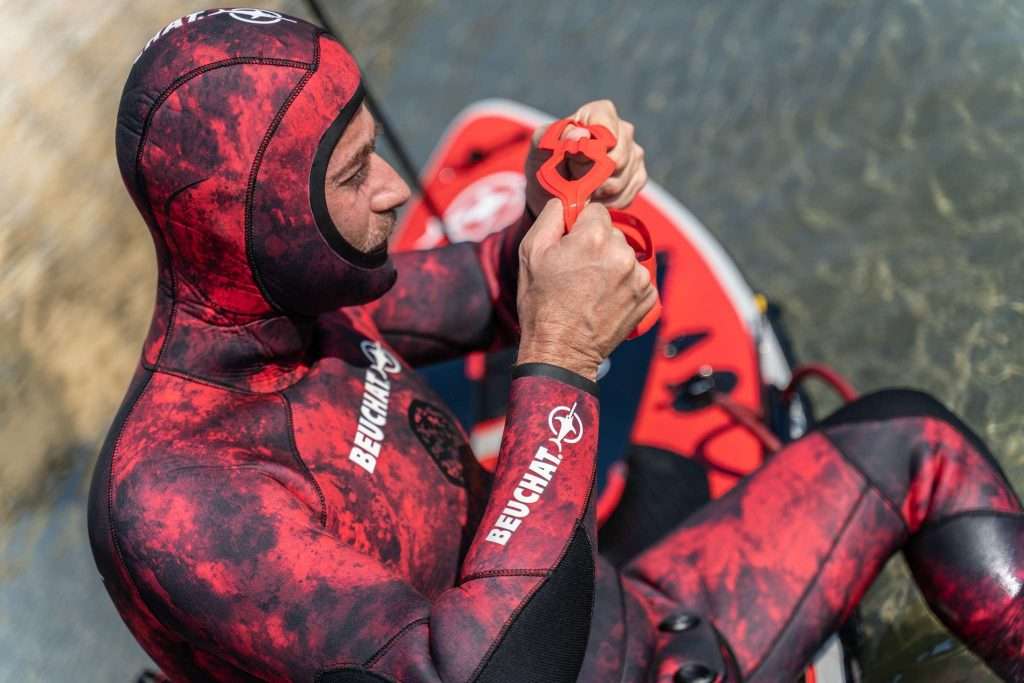 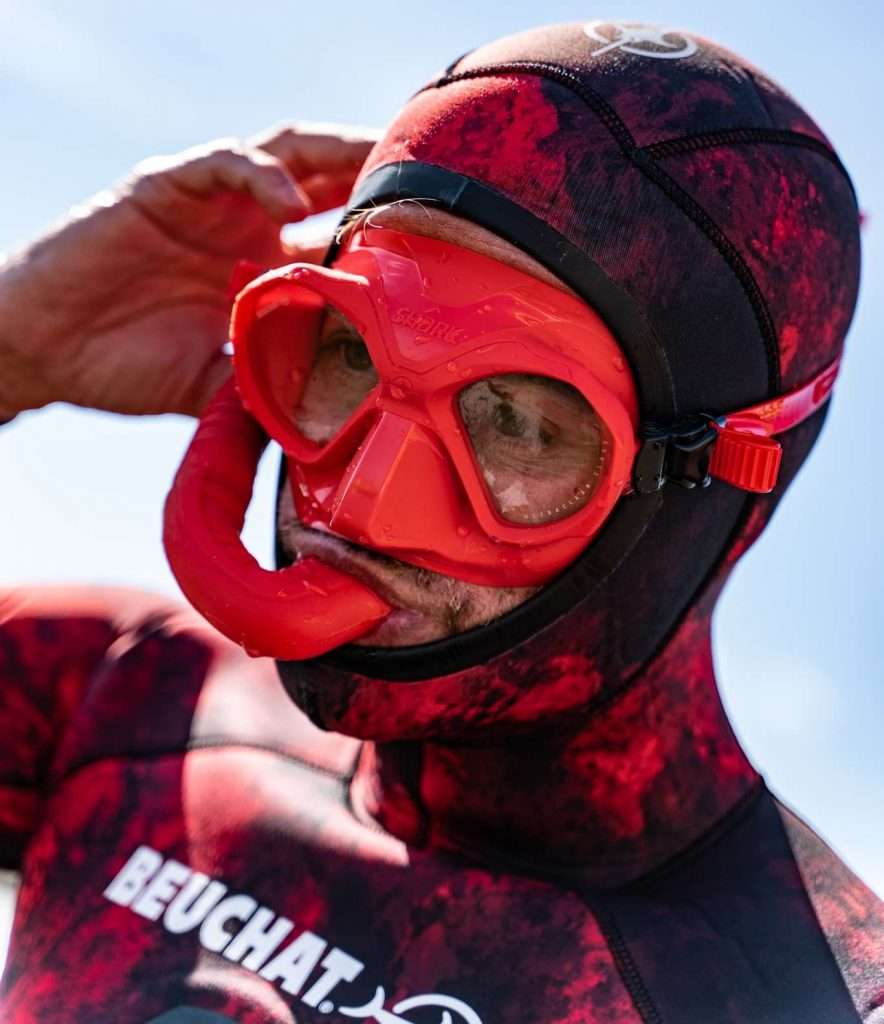 Interesting is the solution with differentiated thicknesses in two areas: the face contour, which is 3 mm versus the 5 mm of the rest of the jacket, and the upper part of the pants in the Long-John style with braces, above the Precut System line, also 3 mm on the 5 mm version.

The wetsuit is preformed on arm and legs, but also in the beaver tail. The back of the jacket is made of a single piece neoprene sheet, with no central seam, while in the areas of the rear of knees and elbows seams are shifted in a way that avoids possible reduction of comfort where the joints bend. Also, other seams are eliminated in areas such as shoulders.

The lower part of the jacket has a high curved horizontal profile seam on the back, aimed to improve adherence and reduce possible fastidious water sacs that usually develop in such area. Internally, the lower part of the jacket has lining inside only on the castor tail or in the area where closing buttons are positioned, while the rest of the internal neoprene surface is open cell, with the intent of creating a better sealing effect. 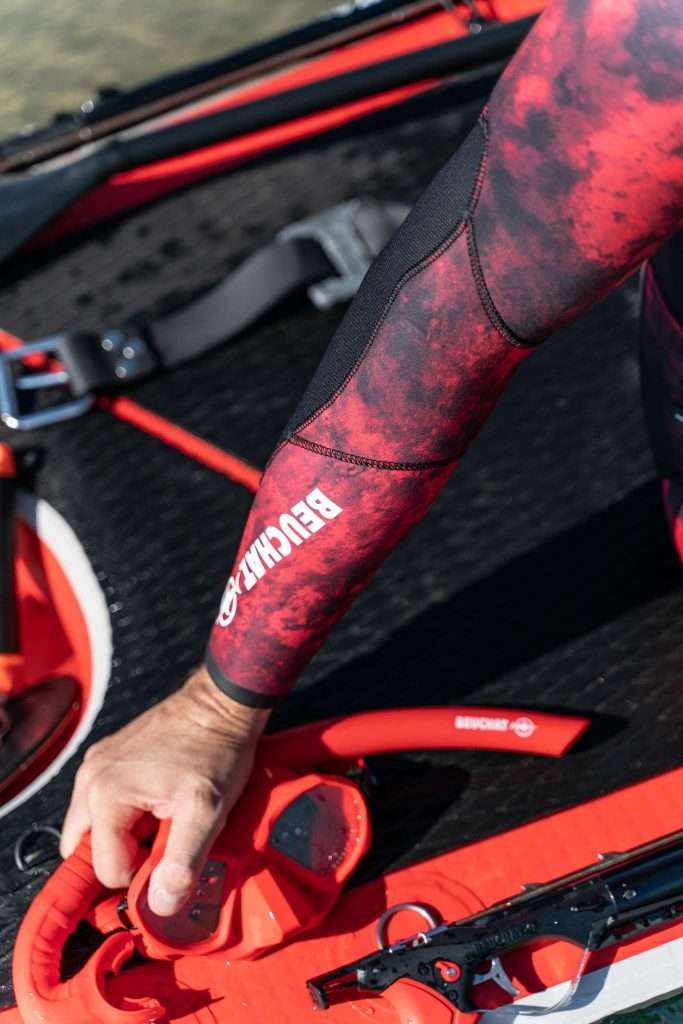 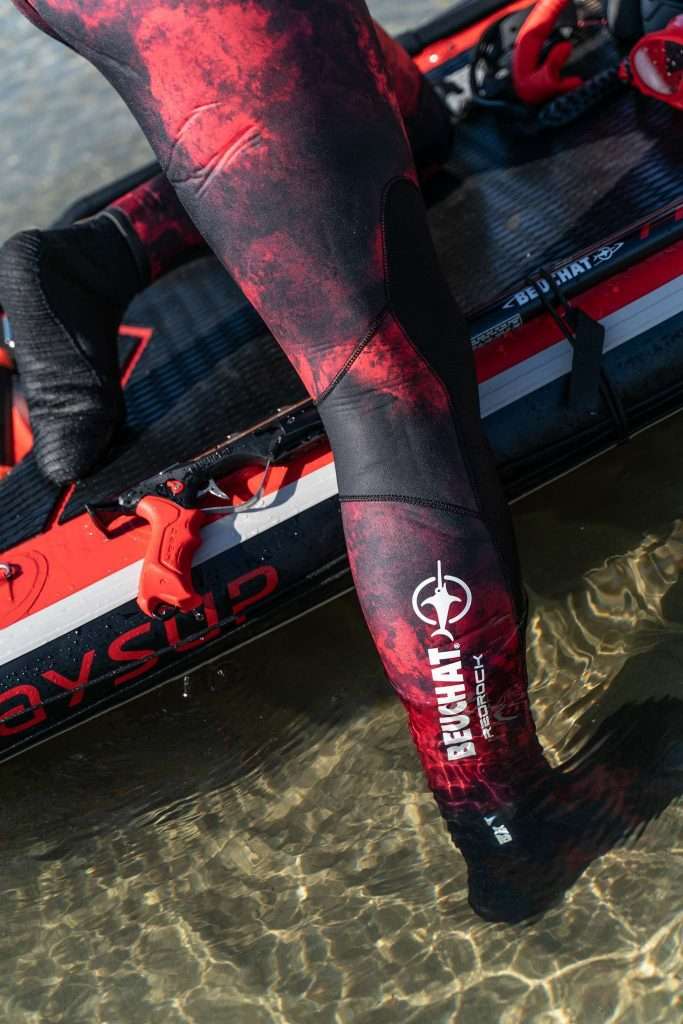 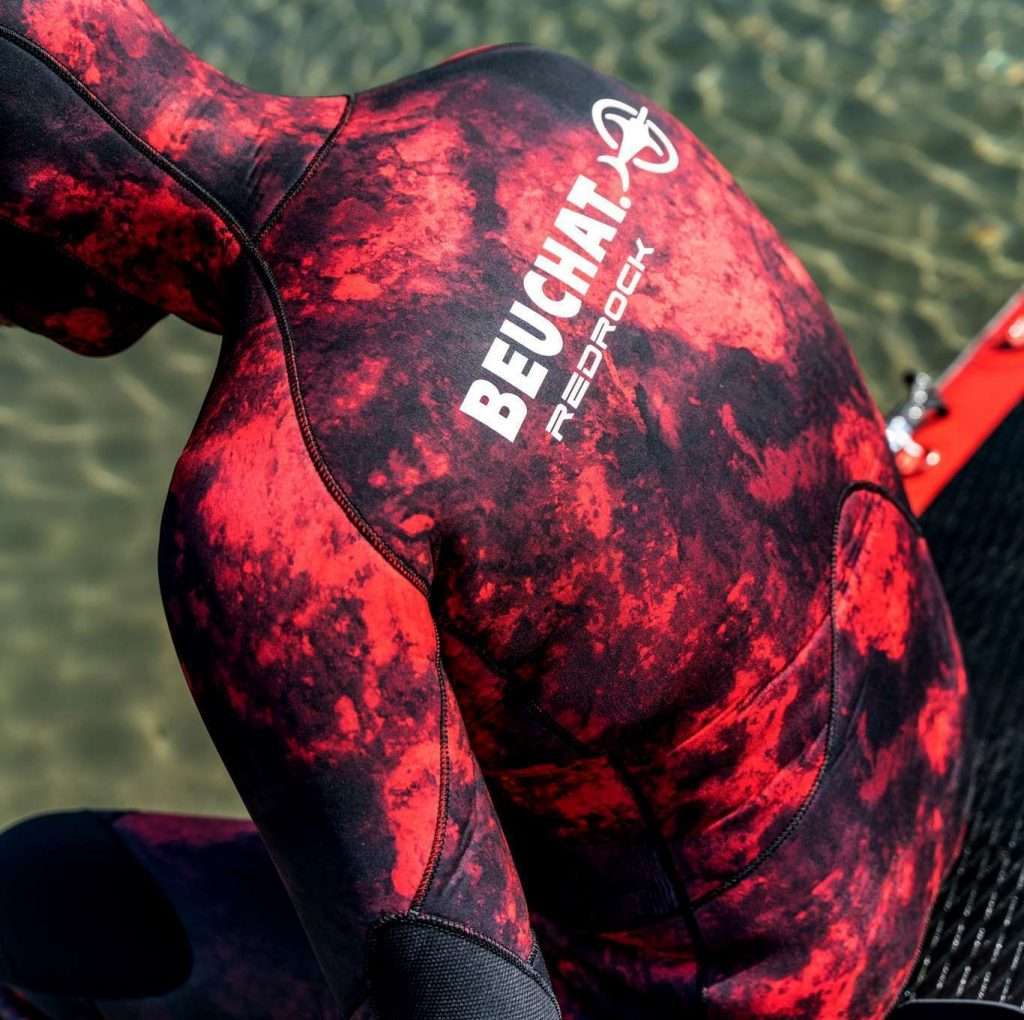 The Precut System (patented) works with Long-John trousers which have braces, easier to dress holding the waist of pants in place while dressing the jacket. Such braces can though be eliminated cutting them along a line where the neoprene thinnens. Such area is made of an anti-fraying texture and reinforcements for the seams. Trousers can be hanged easily for drying when they have braces, but when these are cut off there is no elastic band to obtain the same result.

The Anti-Squeeze System is designed with the internal surface of the cap in the ears’ area being covered with lining which is not bonded completely to the neoprene, and this permits to well avoid the sucker effect on the ears, so improving equalization and comfort.

For the complete data chart of the Beuchat Redrock wetsuit click here.