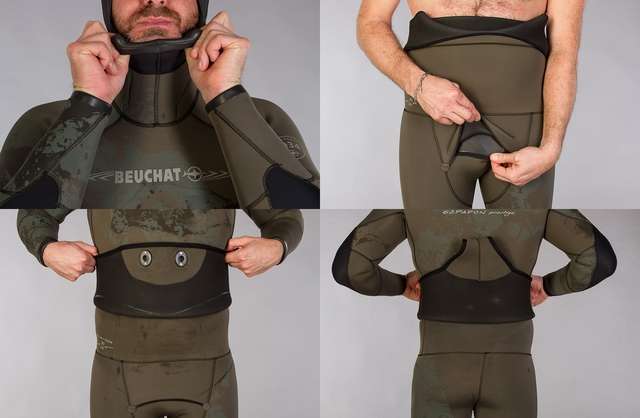 Beuchat presents the New Espadon Prestige, an externally lined top of the line wetsuit, with nice intuitions and, mostly, a first class softness.

A 2017 novelty, already seen at the Dema Show 2016 in Las Vegas, together with another wetsuit, the Espadon Elite (open cell interior and smooth exterior), the Espadon Prestige is made of open cell interior and lined exterior neoprene. The interesting technical solutions are many: extremely soft neoprene, trousers with braces and Precut System, the Magic Camo camouflage, the Braca Concept System and the anti-squeeze system.

The wetsuit sent by Beuchat for the Winter wetsuits Dossier, requested by AP for a test in the water at around 12° to 14° C, is the Espadon Prestige with 7 mm thick jacket and trousers. The first thing that impresses touching the wetsuit is the extreme softness, obtained thanks to the Elaskin X8.8 neoprene, specifically studied and produced for Beuchat, with external lining made of ultra elastic Nylon.

The external lining is interrupted at the height of the protections of elbows and knees, which are made of Supratex 2, a very resistant and thick Nylon cover.

The sternal protection is made of an additional internal neoprene pad that well adheres to the chest and actually gives a “cleaner” external design to the wetsuit. Dimension of internal pad are generous, equal to 26 x 15 cm, and the protection reaches the lower part of the jacket, permitting the loading of long spearguns positioning the butt on the tummy. There is no additional external cover to the sternal protection.

On the finishes side the Beuchat Espadon Prestige is particularly refined. The face, wrists and ankles profiles are made with a folded smooth exterior neoprene, which offers best adherence and sealing, and also better resistance when dressing and undressing, compared to the simply cut neoprene.

Interesting is the solution with differentiated thicknesses in two areas: the cap, which is 6 mm thick with the 7 mm jacket to achieve better comfort, while the upper part of the trousers with the braces, above the Precut System line, is 5 mm.

The wetsuit is preformed on arm and legs, but also in the castor tail. The back of the jacket is made of a single piece neoprene sheet, with no central seam, while in the areas of the jointsseams are shifted in a way that avoids possible reduction in comfort in the area behind knees and elbows, just where the joints bend. Also other seams are eliminated in areas such as shoulders.

The lower part of the jacket has a high profile seam on the rear, aimed to improve adherence and reduce possible fastidious water sacs that usually develop in such area. Internally the lower part of the jacket has lining inside only for the castor tail or in the area where closing buttons are positioned, while the rest of the internal neoprene surface is open cell, with the intent of creating a better sealing effect.

An important finishing is the closure of the cap at the chin area, that in the Espadon is without seams, for much better comfort.

Rich of special solutions signed Beuchat, many of which patented, the Espadon Prestige is surely not a banal wetsuit.

The Precut System (patented) works with trousers that have braces, easier to dress holding waist of trousers in place while dressing the jacket. Such braces can though be eliminated cutting them along a line where the neoprene thins. Such area is made of an anti-fraying texture and reinforcements for the seams. Trousers can be hanged easily for drying when they have braces, but when these are cut off there is no elastic band to obtain the same result.

The Magic Camo system is something nice, as camouflage appears evidently only when the wetsuit is wet, while color is almost uniform when lining is dry. In the end this solution has no real interest though for spearfishing. More interesting is the camouflage itself, which puts together mimetic colors with the fact that these are present only in certain areas of the wetsuit, so to work also on the camouflage solution based on the image decomposition principle.

The Braca Concept is very interesting, and here also the aesthetic part has an importance if compared to the solution with the external system for urine. The system is designed with a triple layer of neoprene that makes it possible to open the wetsuit, but forbids completely, when closed, the passage of water. We will better evaluate the system in the test in the sea.

The Anti-Squeeze System works thanks to a special design of the cap that avoids the sucker effect on the ears, so improving equalization and comfort.

To see and print the data sheet of the Beuchat Espadon Elite click here.

Price on the web

Below the links to the best price on the web. Very positive is the possibility to buy separately jacket and trousers, permitting to choose different sizes and thicknesses, and eventually only one of the two parts instead of the complete set.

For best price on the web found by AP click here.