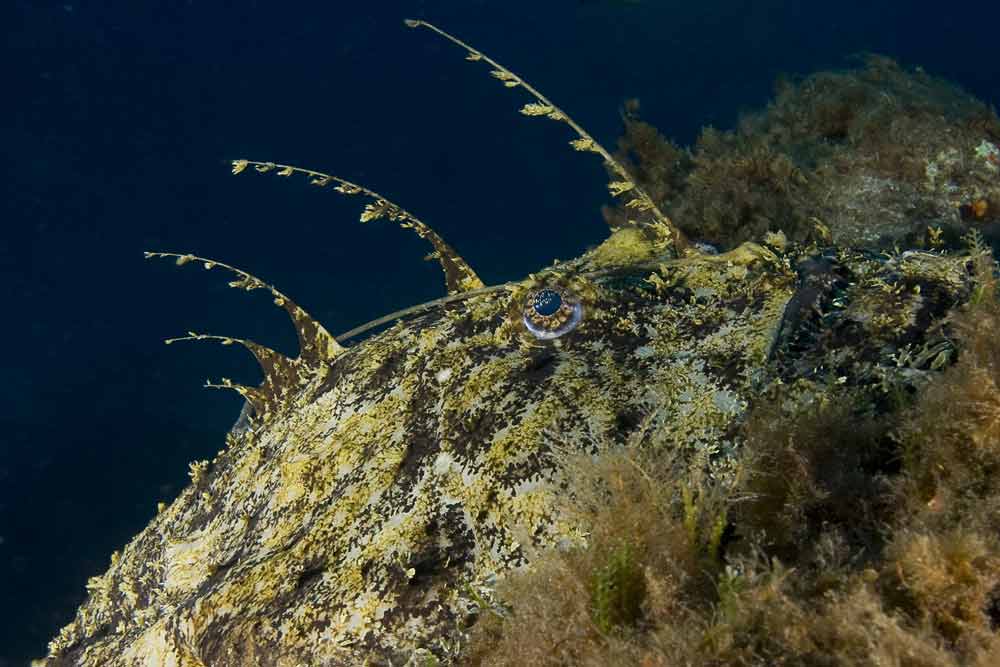 Camouflage in spearfishing and in the sea has different forms and can be obtained in various ways.

More in detail, one can obtain total camouflage taking into account a series of aspects that make ourselves more or less visible, or better perceptible, to the fishes.

The most commonly referred to meaning of camouflage stands to indicate the capacity of a living being, such as a fish, mollusk (cefalopode, such as octopus), shellfish or the spearo, to camouflage its image with the surrounding environment. When octopuses and cuttlefishes, or anglers and other marine animals manage to camouflage in the rocks and on the sea bottom, adapting their body, but most of all their colors, to them, makes it evident that this kind of camouflage is effective towards other fishes and marine predators.

It must be though underlined that, even though many marine animals utilize camouflage to hide from predators, or to be invisible to preys, the way that they all see colors and definition of images is different from humans. A nice full article has been published by the website Focus.it, where comparisons are well made showing difference on the way images are seen by animals compared to men. It is evident from the images of the article how colors and contours caught by the eyes of fishes are much less defined (at certain distances) compared to the ones caught by human eyes. For such reason in marine camouflage people refer to image breakdown: since fishes are not able to see details, because they have a blurry view, camouflage covers, for example for wetsuits, do not necessarily need to be made of detailed images reproducing the sea bottom,  but, more importantly, they need to breakdown images into smaller parts to make the image of the spearo less threatening. The fish will see more objects of smaller dimensions, instead of a big large image, such as the entire figure of the spearo.

Moreover, it is clear that colors are perceived somehow also by fishes, but it is also true that under certain depths light looses more and more its colors, (we know that white sunlight is made of various colors from infrared to ultraviolet), which are filtered from the water. The order of disappearance is: red between 5 and 10 meters, followed by orange, that does not reach 20 meters, yellow, reaching maximum 25 meters of depth, then green going beyond 30 meters, and finally blu. In fact scuba diving video and photo shootings with no filters or artificial lights tend to appear green and blu.

This shows also that, especially in shallow water, colors are important, and in Winter spearfishing camouflage wetsuits must take into consideration image breakdown, but also selected colors adapt to the specific sea bottom.

In the second part of the Camouflage topic we will go deeper in the analysis of the view of the fishes and the techniques to camouflage by the spearo.