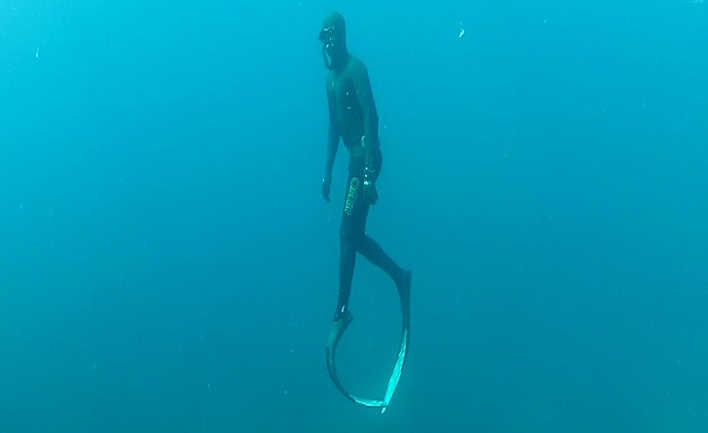 After the  “First impressions” on the Salvimar fins, NEXT, SYSTEM ONE and BOOMBLAST DYNAMIC, AP with the Super Test has gone much deeper, with analisys of speed, effort given by heart rate and number of kicks, both in the vertical descent and ascent movement, and in surface movement.

To support us in our tests we have utilized two interesting computer watches: the UP-X1 of the very attractive Umberto Pelizzari product line, by Omer, designed by MOMO Design, and the Smart Apnea by Mares. As unique features, the first offers the innovative heart rate monitor, to position on the torax, under the wetsuit, the second measures descent and ascent speed, a very useful function for freedivers. Thanks to the analysis software, we have been able to download data on PC and analyse performance of Salvimar fins.

The extremely comfortable NEXT offer a good propusion in non extreme conditions, meaning at depths no greater than 15 meters and surface swimming at medium speed and no opposite current, else the soft blade flexes too much and the thrust is partially compromized. The extreme flexion of the blade, just in front of the foot, is easily visible in the video and screenshot that follow.

The SYSTEM ONE are much stiffer than the NEXT, offer greater thrust, put less comfort. The flexion of the blade is less, especially in front of the foot, and is limited in the terminal part.

With the BOOMBLAST DYNAMIC performance is eccelent, while effort is very limited, just as the fatigue. The blade flexes uniformly, with parabolic curve, along all its length.

The big difference of the NEXT and the SYSTEM ONE, compared to the BOOMBLAST DYNAMIC, is certainly the material. The polypropylene è farely economical, with good, but not eccellent elasticity. For such reason, when the plastic blade bends, it returns to its straight position with a certain delay. To make such a blade work properly, especially if it is soft, finning will have to been wide. On the other hand, carbon fiber is practically the most elastic material on the market, and it is also extremely resistant. When the carbon fiber blade bends, it goes immediately back to straight position, giving back an incredible thrust. For such a kind of fin there is practically no delay in returning to straight position after flexion. All of this is clearly visible in the screeshots of the ascent videos of the 3 different fins: in the below image starting from the left we have NEXT, SYSTEM ONE and BOOMBLAST DYNAMIC. When finning changes direction the NEXT are the blades with the greatest delay, with the curve of the blade still in the posizion of the previous finning fase, the SYSTEM ONE evidence the same situation, but at a reduced level, while the BOOMBLAST DYNAMIC are practically already in a straight position.

Let us see how our First Impressions are confirmed or refuted by tst data.

Tests have been devided in:

In the following chart the results of the tests are indicated, done with 5 mm jacket and 3 mm trousers, 6 kg on the belt, water temperature at 26°C, slightly rough sea, and superficial movement against the direction of the waves and the current (light).

The softness of the blade works slightly against thrust, and the speed, especially in the first meters of descent and ascent. The initial speed from the bottom is anyway good, since a slight and delicate movement permits the flexion of the blade creating, and also determines less effort required starting from still. In the horizontal surface movement finning is very comfortable and the fins can be easily kept under the water surface, thanks to the blades’ softness. Thrust, though, with a kick that can only be narrow and limited on the surface, is penalized.

In general the NEXT are a very good choice for those who do not go deeper than 15 meters, and does not do long transfers on the surface with current or rough waves, a who wants an easy pair of fins that do not require too much effort and does not tire, and, in addition, doea not cost much.

The thrust is considerable, put the reduced flexion of the blade, very rigid, does not permit to have a sufficient curvature to push well in the first few meters of descent and ascent, when speed is zero or very low. Moreover, to the contrary of the NEXT, accelerating from still is quite tough for the legs with stiff blades, so the restart from the bottom is penalized. Horizontal movement is good thanks to a very powerful blade, which works also with a limited movement, even though the drainage holes reduce effectiveness of the kick (they are thought for descent and ascent phases)  The stiffness of the blade makes it harder to keep the fins under the water surface. tested also with water temperature below 20°C, the polypropylene has shown increasing stiffness.

In general we have flet the System One fins a little bit too “difficult”: thrust is powerful and certainly permits deeper dives than the NEXT, meaning well beyond 15 meters, but the blade is stiff, a little bid uncomfortable and much more tireing that the NEXT and the Boomblast. System One can anyway be the correct choice for those who go deep (more than 18-20 meters), but do  ot want to spend a lot of money on carbon fiber fins.

They put togeteher the best of NEXT, with softness and reduced effort, and System On, with their great power. The number of kicks needed during descent and ascent phases are limited, thanks to the great thrust in every condition, and the good acceleration from the bottom. On the surface, the softnss of the blade permits an easy management of the fins under the water surface, while the fantastic elastic return given by the carbon fiber, permits an excellent thrust with very limited and narrow kicks . Effort is minimal, also taking into account heart beat indicated by the UP-X1.

As a general comment, the Boomblast are excellent in every condition. For those who practice freediving and spearfishing often and at great depths, but also long horizontal trasfers on the surface, the choice is perfect. We have tested the soft blades, but maybe, for those who make less transfers on the surface, but more vertical dives, could be an even better solution. Clearly, all of this works if one is ready to spend much more than with polypropyline fins.