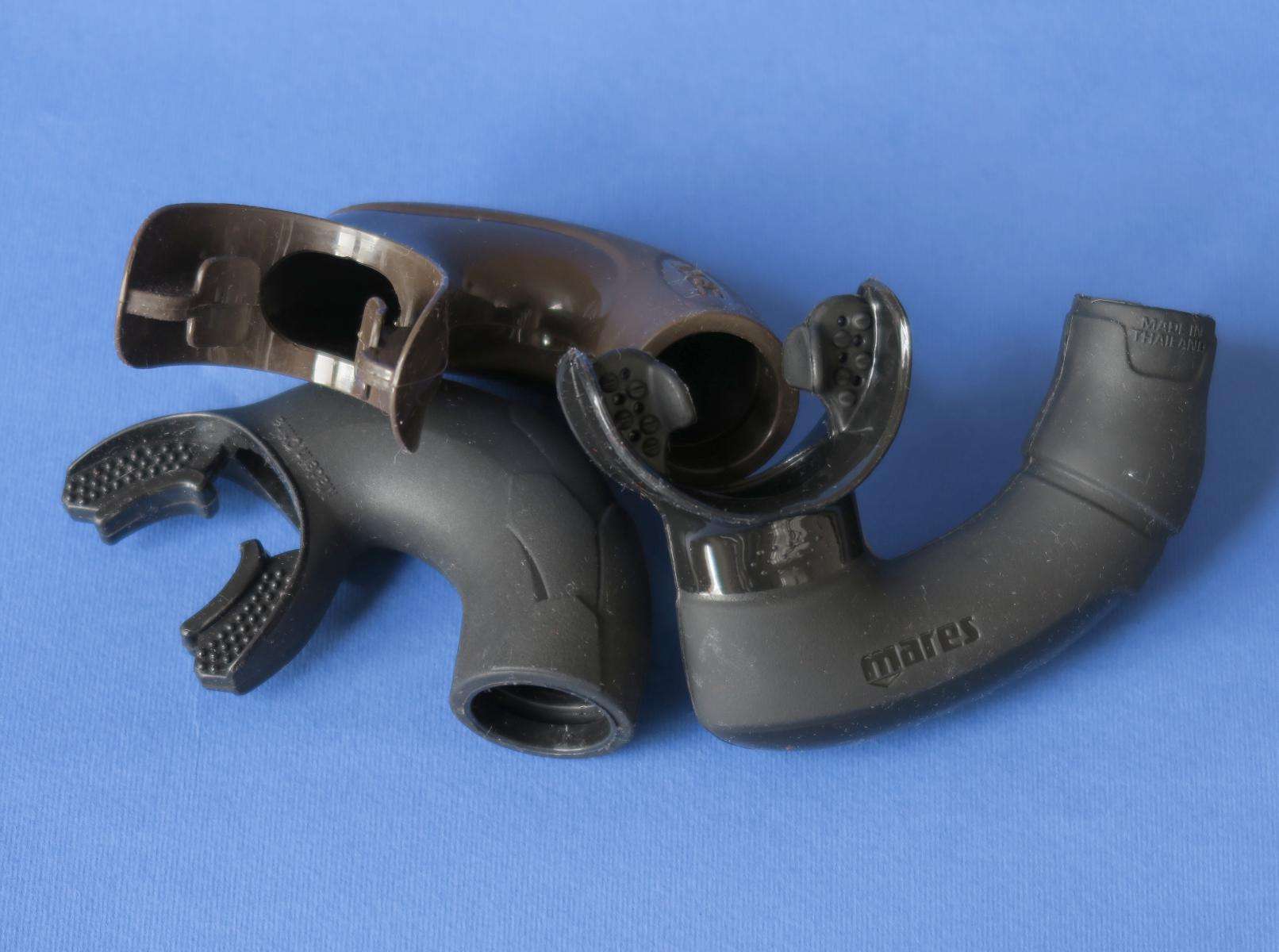 Very often publications dedicated to diving equipment deal with fins, masks, wetsuits and spearguns, in best cases going deep in analyzing materials and preformances, but leaving aside one key equipment, the mouthpiece of the snorkel, that is just superficially described, even though it is what we can describe as the umbilical cord that as divers connects us to our terrestrial being.

The mouthpiece is often confused with the aerator, of which it is just one component. Mouthpiece is present also in the dispenser for ARO and ARA. Practically, mouthpiece is the component that, following the shape of the mouth, permits to breathe without water entering the mouth during breathing phases. As we will see later, this is an extremely important component, of which the sealing function for the mouth is just one aspect.

To better explain the influence that such component has on the entire organism, it is necessary to make a short description of the masticatory apparatus.

The temporo-mandibular joint , that we will call TMJ, is made essentially of two parts: the condyle, which is part of the inferior maxillary, and the glenoid, in the upper maxillary.  The condyle is positioned inside the glenoid fosse and is kept in such position by the joint legaments, which permit the condyle to to make movements that normally other joints such as knees and elbows cannot perform. As all joints, also the temporo-mandibular one includes a meniscus that works as a cushion between condyles and glenoid and that, during mastication, damps and facilitates sliding of the parts. Movements that can be performed by such joint are amazing: opening the mouth, the condyles shift forward and when closing the come shift back. Moving the jaw to the left the right condyle moves forward and the left will move backward, and viceversa. Moving the jaw forward, both the condyles will move in the same direction. The only fixed point for centering the joint is the dental occlusion.

Make a try: put your fingers just in front of your ears and move the jaw making extreme movements, you will feel the condyles that will make exactly the movements described, and you will be impressed by the extreme mobility.

Effect of the mouthpiece

The extraordinary characteristics of the TMJ to be able to move on three different planes make it a real miracle in nature, but also a weak point, especially when we have to keep in our mouth the mouthpiece for many hours: the two rubber parts that are in between the upper and lower teeth cause a loss of occlusal balance and cenetering of the condyles. with consequent sensation that the molars will touch before the incisors, but in extreme cases generation of pain that can be mistaken with otitis. In such situation a deep medical analysis is advisable.

New researches prove that an occlusion conditioned by interferences is strictly linked to a psychophysical stress, that in some people can determine pain and incorrect posture. All of us as spearos and freedivers know how much stress limits concentration and determines heart rate increase, aspects that are negative for spearfishing and freediving.

The choice of the mouthpiece

From the information we have, we can assert that, to avoid negative influence on the TMJ, it is necessary that the two small rubber inserts of the mouthpiece are positioned at the center of the mandibular arch, meaning at the height of the premolars, so it is easier to balance the pressure of the condyles on the glenoid and, moreover, it is also key that the rubber inserts are thin and ample, so they can cover at least all the surface of the teeth involved.

The choice of a snorkel must never be underestimated: we spend so much on a pair of fins that help us save energy, even though most of the modern fins already have excellent trust, but then we risk to loose the advantage gained due to the stress generated by the wrong mouthpiece.

Born in Rome, Italy, year ’62, passion for spearfishing of Massimo De Pascalis comes from his father Carlo, that introduces him to the different techniques. He dives in Circeo, Pontinian isalands, but also Greece, Corsica, Sardinia and Sicily. In Rome he obtains his degree as dental technician, and after some years opens a laboratory specialized in dental restoration and gnatological devices for the recovering of mandibular temporal disfunsions. In 1996 Massimo moves to Chieti, where relation with spearfishing changes deeply, as he has to adapt to the constantly turbid waters of the Adriatic sea costs of his area. In 2004 he decides to officialize the activity, brought forward in the previous years, of design and manufacturing of wooden spearguns, already presented on AP, founding MGMsub. Among his most famous models, the CH90, also known as Muletto.

At the base of MGMSub speargins are the high brandishing capacity, lightness and maneuverability of the handle, whose angle with the barrel, the taylor made dimensioning ofr each spearo and the not extreme anathomic design permit to release the shaft even in the complex positions.