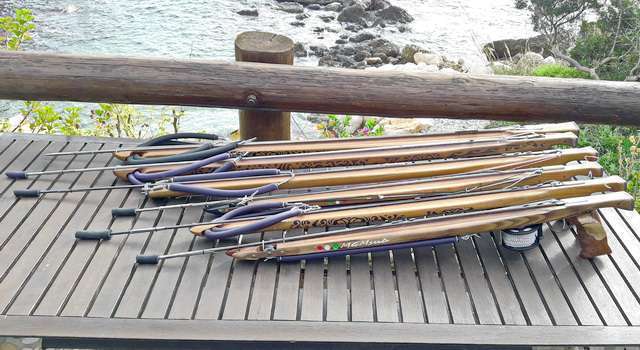 The MGM sub wooden sling guns by Massimo De Pascalis deserve a presentation at least for some particularly interesting solutions; all of this with a special attention to simplicity.

The sling guns by MGM sub are classified in the double circular band solution, the CL and CL Maori Spirit, with two versions Honuwhenua and Skualo, in the CH solution, with aligned bands and Open muzzler, and the Roller version, named MR.Queenqueg.

Soul of the MGM sub sling guns is surely the wood, with which the entire body of the speargun and the grip are made. The logic by MGM sub is to utilize the sassofrasso wood, lighter in color and sufficiently hard, but also light in weight, for the lateral bands, so to have a good balancing of the sling gun. The central part of the speargun is instead made of Sapelli mahogany, of a darker color and particularly hard and resistant to wear, but also heavier, so to be able to resist forces and friction of the shaft along the shaft guide. This light and dark colored solution with two types of wood also strongly characterizes aesthetically the MGM sub sling guns.

Key in the customization of the products by MGM sub is, at request, the tailor made grip, which is not necessarily available with all the wooden guns on the market. The customer sends the measure of his hand (right or left depending on the needs) with the indication of the distance between the wrist and the index finger that will pull the trigger. The correct measure in fact, according to MGM sub, is the one that positions the trigger between the first and second phalanx, also considering the thickness of the glove.

MGM sub sling guns utilize the Sigalsub release mechanism Reverse, meaning the release tooth is inverted in its position compared to the traditional solution. The release mechanisms utilized are more specifically the Sigalsub Reverse and the Sigalsub Jaco. The first, extremely light and helpful in balancing the sling gun, is though modified by MGM sub in the line release system lever, substituting the small pin with a tiny lateral toothed wheel, called “Flash”, which is considered more reliable.

The two solutions CL and CL Maori Spirit Honuwhenua (tortoise in Maori language) differ for the Maori graphics present on the Maori Spirit version. Such drawings, stencil made and then covered with transparent paint, not only have an aesthetic function, but also create a sort of camouflage based on the image decomposition theory. Made in two lengths, 70 and 90 cm, in both versions, the CL offer a classic double band muzzler, with respectively 14.5 and 16 mm diameter rubber bands.

The muzzler is made with specific profiles that lift the rubber bans aligning them perfectly with the shaft for a more efficient shot.

Still part of the CL Maori Spirit family is the Skualo, with the shape of a hummer head shark drawn in the inferior part of the barrel. The Skualo is 105 cm long, and for such reason it si particularly adapt for the waiting technique in transparent waters. To better balance the sling gun its dimensions are increased by 30% compared to the other CL sling guns.

Particularity of the CH line is the Open muzzler, in the two versions, Ertalon and Iron. The first, made of Ertalon material, a particular nylon with superior resistance characteristics, has two small rubber pins that hold the shaft in place, also with the speargun upside down but, at the same time, when shooting they bend forward with non retention effect on the movement of the spear.

The Ertalon muzzler, just as the Iron, permits fast loading of the speargun thanks to the possibility of insering the shaft from above pressing down and widening the two rubber pins (on the Iron it would mean bending the two “lips” of the PVC structure). Moreover, both muzzlers do not necessarily require to position the line to hold the shaft in place, a good advantage when one wants to quickly re-shoot.

The Iron muzzler is made of a steel base structure, with a plate in PVC which avoids the shaft coming out when the speargun, for example, is turned upside down and, just as the Ertalon, avoid fastidious noise of the shaft itself. Even though the positioning and holding in place of the shaft is slightly less effective with the Iron, this muzzler is extremely compact.

All the CL and CH sling guns by MGM sub are complete with a special small storage for the positioning of balancing weights.

The name, MR.Queenqueg, is the famous one of the harpooner of Moby Dick novel, the masterpiece by the American writer Herman Merville. Two years of research and testing in the sea have brought to the novelty of 2017 by MGM sub, a traditional Roller, with no extreme evolution, but with the always strong intent to focus in simplicity of use. MR.Queenqueg differs from other Roller solutions due to the small metal bridge that, still able to hold the shaft in place, permits the use of all kind of spears.

The intelligent combination of two different woods, the sassofrasso and the Sapelli, permit an excellent balancing even with the Roller muzzler and heavy shafts of 7.5 mm. The tip of the muzzler with tricuspid profile eases the perfect positioning of the line.

If the sling guns by MGM sub take advantage from the line going backward from the reel to the release lever, on the Roller such intuition also helps to free from the problem of the line being in the way during loading.