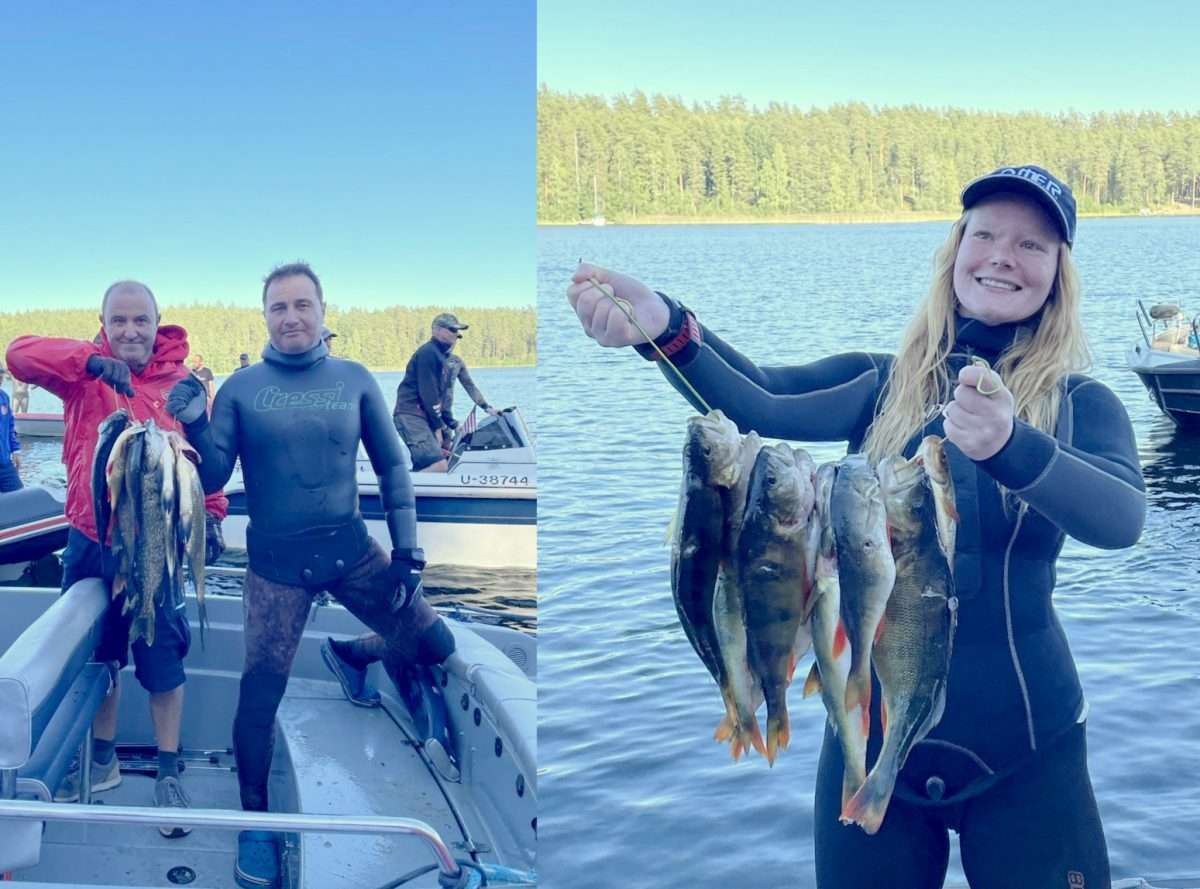 Held in Finland, Retretti, Lake Puruvesi, the 1st CMAS Freshwater European Spearfishing Championship has been disputed Saturday and Sunday 13 and 14 of August 2022. A great challenge by CMAS and the Finnish Underwater Federation. 24 men and 13 women have participated to this first edition. This is for a start a particularly great result. Not only the Nordic countries were present, like of course Finland, Norway, Denmark and Great Britain, but also “warmer” countries. In these, spearfishing in lakes is not allowed, like Spain and Greece have participated. Also Turkey, finally extremely strong in this 1st CMAS Freshwater European Spearfishing Championship, was present.

A special mention to the Team Ukraine, managing to be present despite the war with Russia and the limit of men from 18 to 60 years of age to leave the country. Least, but not last, the USA Team, even though not part of the European countries, has strongly wanted to be present, due to their great tradition and growing diffusion of freshwater spearfishing. In addition, USA will host in May 2022 the 1° World Freshwater Spearfishing Championship in Lake Powell. This is only 3 hours car from Las Vegas. So it was for the USA Team, and Mike Livingston, President of the USA National Freshwater Spearfishing Association, a great opportunity to meet the European teams and invite them to what will definitely be and amazing competition and show.

The extraordinary beautiful location of Lake Puruvesi, positioned 360 km North-East of Helsinki, added to the great choice of period, August, has been a great solution by the Finnish Federation.

Puruvesi is a lake in Eastern Finland. The lake is located in Kerimäki, Kesälahti and Punkaharju municipalities. Part of the Saimaa lake system, it borders on the sub-lake system of Pihlajavesi to the south. As is the case of other lakes of Saimaa, it has numerous islands and consists of numerous open lake areas. The largest are Hummonselkä, Pajuselkä, Sammalselkä, Mustanselkä, and Ruosteselkä.

The lake is known for its pure water and has uniquely good underwater visibility for a Finnish lake. Succh visibility easily extending to 6–10 metres (20–33 ft).

In the two days of competition the species caught have been mainly perches, ides, lake breams, pikes and a few burbots. The latter only the second day. The most spectacular catches have been the pikes, the biggest one of almost 10 kgs caught by the Ukrainian athlete and Captain, Oleksandr Halaktionov.

The competition fields of the two days were particularly large, even more than the traditional situations in competitions at sea. The water temperature was around 21°C and depth went from extremely shallow down to 20-25 meters maximum. Still, finally the best spearfishing conditions were found not deeper than 12-15 meters. In fact, conditions were far too dark beyond such limit.

The main techniques are the “aspetto” and the ambush. The aspetto is done mainly looking for perches and lake breams, searching areas where small fish are. These are the found either by scouting or with the scanner. Normally the perches tend to come up from the bottom of the lake on small rocky climbs. These actually are a good place for the small fish. These are the perches’ and breams’ food. If there are no small fish, there are surely no perches!!! The situation is different from the sea. You need to be extremely precise to find fish. If you are just a few meters away you will not see them.

The ambush is done among the vegetation growing in the water. There you can fins breams moving around and pikes hiding and lying on the lake floor. This action evidently is performed in very shallow water.

The two days of competition

A great location was set for the 1st CMAS Freshwater European Spearfishing Championship. The start at the dock wasclose to all the houses (Harjun Portin Matkailukeskus) where the athletes were staying. 6 hours are given to the athletes to compete in both days. This, due to the great dimensions of the two competition fields. Also, this is done due to the big distance between good spots with fish. Dinghies, aluminium and polymer boats are mainly used on the lake. There have been difficulties during preparation and in day 1 as some boats hit some shallow water rocks and damaging the engines.

No huge catches are caught the first day of the 1st CMAS Freshwater European Spearfishing Championship. At the end of Saturday it is an amazing Turk athlete Kilic Sabri to win the day. He brings home 14 valid fish for total 18904 points. Close behind the local champion Matti Pyykko, with 15 valid catches and 18479 points (97.7%). Third of the day is the Spanish champion Angel Santiago Lopez, with 9 valid fish and 15996 points (84.6%). We were with Angel on the boat at the end of day 1. “Today has not been a very good day, but tomorrow will be better. Still, it is going to be very hard”, the Spanish athlete told us.

In the women’s standing the first day is clearly won by the Finnish athete, Jemmi Levonen (Pathos). The local spearfisherwoman, the most experienced of team Finland, brings to the weighing 7 valid fish, for total 6546 points. Far behind is the second, the Ukrainian Anzhela Holovianko, with one valid fish and 2700 points (41.2%). Third is her compatriot Svitlana Mayorova (one valid fish, 2212 points and 33.8%).

Bad luck for the Spanish athlete Jacobo Garcia Fernandez (Cressi Team), hitting the rocks with the boat and day 1. He continued to spearfish, but could not change spot until a new boat reached him.

“Today there should be more fish and more species also”. This is what the local champion Matti Pyykko tells us at the dock before the start.

And so it is! The first signs of a great day (sunny, but less wind and warmer than Saturday), are the three great pikes caught. The first one by the Danish Øster Claus and then by the Ukrainian Captain Oleksandr Halaktionov. Finally, another is caught by the Title winner, Angel Santiago Lopez. The biggest fish will be the almost 10 kgs pike by Halaktionov.

Among the women, it is once again Jemmi Levonen to win the day, with 8692 points. Second is once again by Anzhela Holovianko with 4528 points (52.1%). Third is an excellent Elisabeth Fosstveit, of the Norwegian Team (4176 points- 48%), who was eighth in day 1.

Of course also the teams’ standings have been defined. Among the men, it is the home team Finland winning the competition (425.5%). Second is a fantastic team Turkey (316.5%) and third an always strong Spain (306.1%). The Spanish team has been penalized by having only two athletes in the standings.

Angel Santiago Lopez: “I am very happy for this title. I am sorry I could not do even more to help my team to be higher in the standings. I did not expect to win. We only scouted for 4 days. I had no information at all on spearfishing in the lake and in this lake. It is a fantastic result! A special thanks to the Spanish Underwater Federation (FEDAS). Also to Cressi. They have helped me compete in this great event”

Jemmi Levonen: “What an excitement to win here at home. I do not have a specific experience in lakes. I normally spearfish in the sea and I live in another part of Finland. I felt for sure the pressure of competing at home. I felt well after day 1, but the pressure actually grew. I saw the title but was afraid to lose it being so close to it. In day 2, I finally was more calm when I understood I was in line with day 1. Thanks to the Finnish Underwater Federation and to Pathos.”