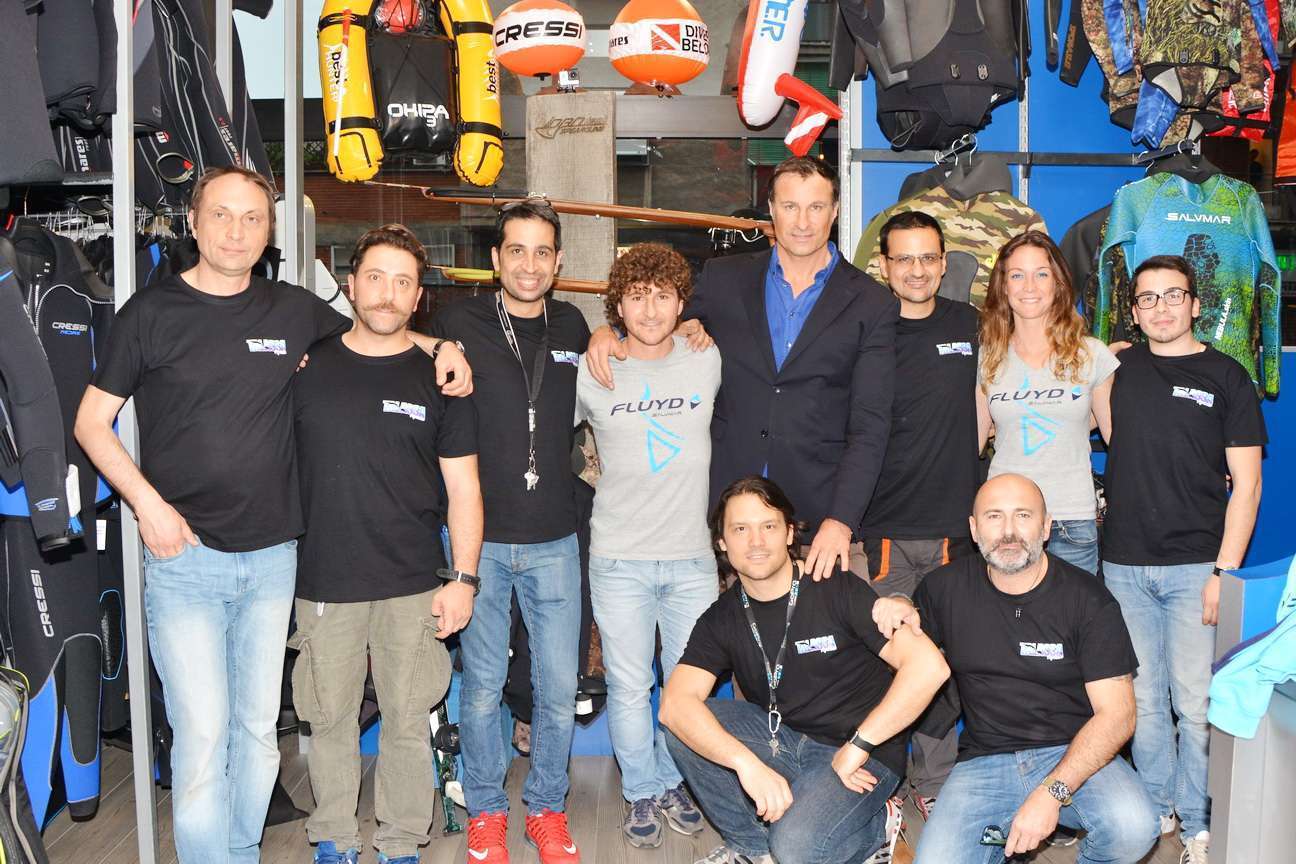 In occasion of the renewal of an important Apnea and Spearfishing shop, Talassa, based in Rome, Italy, we have met two incredible apnea Champions, Alessia Zecchini and Vincenzo Ferri.

Above the two great Champions with Talassa staff and Italian Spearfishing Champion and Instructor, Gabriele Delbene.

AP: Alessia, after 3 gold medals at the 2015 Apnea outdoor World Championship in Ischia, nobody seems to be able to stop you, not even in the Indoor: 215 meters and a new Italian Record in the dynamic apnea bi-fins…tiny fins we would say.

AZ: Yes, I am extremely satisfied. Even though this year my training has been delayed due to an accident happened three months ago on my scooter, with a bad injury to my right arm, my performance at the Dugongo Cup in the DYN Bi-fins has been great.

AP: How come you use small fins?

AZ: Because they are more adequate for indoor competitions. During the turn they do not generate the “sucker” effect as the long fins, and, moreover, the kick with longer fins would have to be wider, meaning it would require more effort.

AP: Well up to now you have been “joking”, but this year you have the World Championship in Italy. How will you train?

AZ: I am training daily, 5 days a week, while in the weekend I relax. I train with finned swimming and apnea, while in this phase I am not training out of water anymore.

AP: Which is your objective for the Indoor Championship and in which specialties will you compete?

AZ: I will participate to 3 specialties, dynamic with monofin (DYN), dynamic with bi-fins (DYN BF) and dynamic no fins (DNF), while I will not participate to static (STA). As for my objectives, I only know that I will declare the maximum distance to be able to start last, then we will see.

AP: Which are the foreign athletes you recon to be the strongest?

AP: But this is not all, as after the Indoor there will be the Outdoor World Championship in Turkey, and where, after the amazing result of the 2015 Championship, you will be the athlete to beat. How will you train?

AZ: For the Outdoor I will alternate gym out of water, with free exercises, to the swimming pool. But I will also skate, a sport I love and which I recon very useful. Then, evidently, training in the sea, that will have to be the Mediterranean. Certainly, I will want to go to Turkey a few days before the start of the Championship.

AP: And which are the teams to beat?

AZ: I really hope the Japanese Team will participate, as they are really strong, and it would be a good challenge.

VF: In this phase I have already passed the strengthening program, so I am only training in the pool, 5 or 6 days a week. I am in the download phase, so less heavy duty training and more technique refinement.

AP: How come a champion like you still has to work on the technique?

VF: The body changes, the muscles every year increase if training is constant, so physical and metal aspects change. As a consequence one has also to adjust the technique.

AP: Which are the teams to beat?

VF: Certainly the French, among them Arthur Guerin Boeri, very strong in the DNF and World Champion last year in Mulhouse, in France, but also Alexis Duvivier. Surely also Croatia, with Goran Colak, even though I am not sure he will participate, as he is also extremely strong in the Outdoor.

AP: So, the Outdoor Championship: would you like to repeat the great results of 2015, improve them?

VF: It is difficult to say. Participating to both World Championships (Indoor and Outdoor) is already a big challenge. Certainly, after the Indoor I will need to do an aerobic work in the swimming pool, especially using short fins. Swimming without fins is instead not good for me, as I tend to work 80% with the arms and 20% with the legs, so the latter train just a little.

AP: Which will be the appointments before the Apnea Outdoor World Championship to test your condition?

VF: We will have a stage in Bordighera at the end of June – beginning of July. I hope I will be able to reach 90 – 95 meters of depth with the monofin, which would already be a very good result, considering I will not have done deep dives in the sea since last year. Of course I will have made some dives to spearfish!

AP: Which is your objective for the Outdoor Champs?

VF: In the monofin, it is certainly to go deeper than 100 meters, a value that I already had in mind last year, but I declared -98 meters since weather conditions expected seemed very bad. Finally they were better than forecast.

VF: Without doubt Croatia, among all Goran Colak!