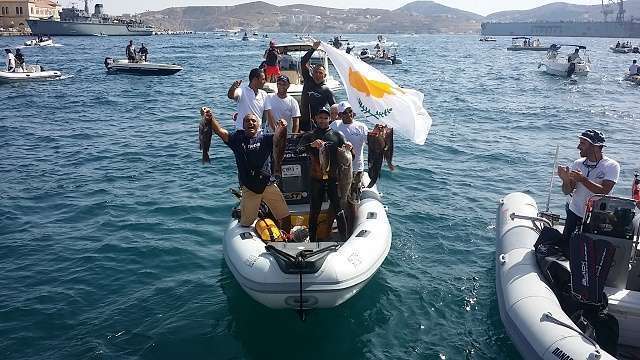 We have diffused the results of 2016 Spearfishing Champ, and also the official website of the event and international webistes have also shown results. Useless at this point to look again at the classifies, but we believe interesting to make an analysis of such a key event, probably the most important of the year.

Choice of Syros and its abyssal depths

The World Champ in Greece has been organized in the waters of an isalnd, Syros, known to have little fish and only at very deep depths. AP has interviewed Giacomo De Mola, the strong Italian athlete, well experienced of the Greek waters as he lives actually in the Greek archipelago. Giacomo has actually confirmed that a huge number of islands in Greece are known to be full of fish and at much lower depths compared to Syros.

Now, with 24 nations participating, coming from far away, such as New Zealand (the furthest), Australia, Tahiti, USA, Argentina, Brazil, but also closer ones, such as Great Britain and Finland, where spearfishing is usually practiced between 10 and 30 meters (try to go down to -40 or -50 meters in the cold waters of the British or Finnish waters) and where the technique with the mobile weight is practically unknown, what kind of sense has the choice of the competition fields in Syros had?

No doubt, the hosts, the Greek team, have pushed to compete in a situation where the techniques they are strongest in, deep cave and ambush spearfishing focused on groupers, would be exalted, creating at the same time huge difficulties to most of the athletes of the other teams. But all of this has been done at the expense of the show (that is exalted by great and numerous catches, possibly full of different species of fish), the fun and involvement of the other teams and, most of all, safety. Yes, because luckily no really critical accident has happened, but it could have been different. When 78 athletes from all over the World challenge each other at incredible depths, even deeper than 60 meters, taravana and barotrauma that have hit some athletes have been little compared to the possible risks. It is in fact very clear that during competition the athlete gives all he has and goes to his limits and beyond; but one thing is to do so at – 30 meters, and another is being at – 60 meters.

Luckily, it must be said, organization has been extremely good, of course taking care first of all of safety, with the President of the Organizing Commitee, Mikos Kambanis, that has really done a huge job, being always active and present, dealing even with very practical tasks, and to him we send a great plause, together with all his team. This is the mentality and the approach needed in such events, while sometimes the organizational commitees of CMAS are still led by “politicians”, stuck to their chairs and power, often already in the age of retirement, and so not interested in the good of this sport and in its future.

And so let us analyze the role of CMAS. If on one side people like Kambanis are extraordinary, on the other we ask ourselves how CMAS has so superficially accepted to organize the World Championship in such difficult and deep waters, without taking into account the danger and the opportunity of competing in extremely complex and risky race fields. In fact, if on one side danger of such location is obvious, dew to the amazing depths needed to spearfish, on the other the lack of fish has brought to the catch of many preys that were underweight, reaching even the situation of a striped red mullet taken to the weighing machine, as athletes were annoyed of coming back to the dock with zero fish caught. Of course, there have been great catches, the most amazing a giant brown grouper of 17.20 kg, but finally too few and concentrated among just some athletes.

In the first day of competition the zero or underweight fish situations have been up to 40, and the second day they have even increased to 43, with 78 competitors. At the end of the two days of competition the teams that had caught only three fish or less have been 11 out of 24, considering each team made of three athletes, this means one or less fish per athlete.

During the first day of competition, following the athletes from the media boat, only after 2 hours we have managed to exult for the first catch we managed to see, with a nice golden grouper of around 3 kg, but what a neverending wait without seeing a single fish!

Many captains and athletes of different nations we have interviewed, have lamented the extreme spearfishing conditions of the competition fields, the necessity of using mobile weights, a technique known and practiced only by few of the competitors. Next year the European Champ is expected to be held in Croatia, while in 2018 the World Champ could be organized in Portugal. We hope a little bit more of common sense will be there in choosing the competition fields, aiming first of all on safety, meaning acceptable depths for all, involving the maximum number of nations from all over the World, but permitting them to spearfish having fun and without being handicapped by the need of using special techniques, as the mobile weight this year, or the extreme depths, possibly finding areas with lots of fish of different species at different bathimetrics, and not only groupers.

Rules, the unfair and the controversies

Another important topic to be analyzed is the regulation and what has happened at the World Champ. The first striking event has been the unfair play of the Greek Emmanouil Giankos, who, as a host, has been caught using a torch, forbidden in the competition. If on one side the happening is serious and a real poor figure for the hosting athlete, on the other we cannot really be sure if any other athlete has done the same, and has just been more attent and smart in doing so. In fact, at the World Champ a lot of gossip has been made about torches being left in the hole deep underwater during preparation days, to be then utilized during competition, as who can really see you at 50 meters of depth? Probably Giankos, it was commented, has by mistake switched on the torch during his ascent, and the judge on the dinghy has seen it, but just by chance. So, at this point, to avoid regulation not being respected, is it not better to reduce it to the minimum? Was it not preferable to permit the use of torces to everybody? The catches would have been greater, many zero fish situations would have been avoided, and since it is just a couple of days in the year, these should have been supported in every way to have the best show. We must, in addition, always remember that the catch is all donated to humanitarian organizations. This last aspect, key, must always be communicated and pointed out in every spearfishing competition, to help this sport that is unfairly more and more attacked by public opinion, even though it is more respectful of the sea, selective and less invasive than many other fishing techniques, such as with nets, boulers and other professional systems.

Always regarding Giankos, the topic of his disqualification is strange, in the sense that the disqualification has been applied, and this is fully correct, but the Greek athlete has been substituted on the second day by a reserve. Now, if one is disqualified, this must not impact the other members of the team individually, but it must influence the result of the team on a whole. Differently, it would be as if in football a player is expelled, but substituted by a reserve…no my dear, the team goes on playing with only 10 players, and in the same way Greece should have continued with only two spearos bringing points to the team. Making all calculations the Greek team would have anyway been in first position, so in the end luckily no injustice, but let us be ready for next time. If the Italian Team, in fact, was closer to the Greek in the points ranking, (a lot of discussion has taken place in the Italian Team in the final moments of the weighing phase, evaluating the opportunity or not to make an appeal on certain points among which this one), the final classification could have been distorted, especially the first position.

Finally, the situation linked to the new 2016 World Champion, the athlete from Cyprus, Giorgios Vasiliou, who has totally deserved the title, by the way beating the hosting team. Let us clear out what happened regarding the brown grouper of probably more than 5 kg caught by the new World Champion on the second day of competition. Reason of the dispute the fact that the fish was first shot by a Cypriot athlete, who then was not able to bring up his catch and, it seems, actually called Vasiliou who has finally made the pray his. The judges have though decided that the catch was not actually Vasiliou’s. In our opinion such solution is correct, while it would not have made sense to disqualify the new World Champion, as this situation is a lot different from the one of the torch and the Greek athlete, as the latter was premeditated and, also, the situation of Vasiliou is not specifically found in the regulation.

It must ne said that Vasiliou, not yet aware to have won the title anyway thanks to the calculation through percentages, on stage has had a too nervous reaction, especially when, in front of public and photographers, after the photos, he has made a bad gesture throwing his prey in the fish basin. A move that has not been respectful to media, public, organization, and, even the prey itself.

Briefly, without wanting to be too “careful” towards any firm or brand, but sincerely willing to support sponsors that invest and believe in spearfishing events, it must be underlined how the organization of the World Championship in Greece, followed and supported on the communication side by the main sponsor,  Deep Master, company from Ukraine recently on the market, has been extremely valid and of high quality.

Some difficulties have occurred the first day with the live streaming, taking something away from the final result, but such things can actually happen sometimes. On the other hand the official website, with presentation and interviews to the teams, the stand setup at the main harbour of Syros, with perfectly mounted banners and great big screen, have given the image of a very high quality event, worthy a World Championship. Often, to the contrary, for example at a national level (see the Absolut Italian Champ in Castelsardo, Sardinia), the setting of the event is of extremely low level, communication is practically null, and image of spearfishing finally very poor.

Finally, a thank you to Salvimar for the support given to AP to follow the World Championship in Syros and post real time news, videos and photos on its Facebook page.