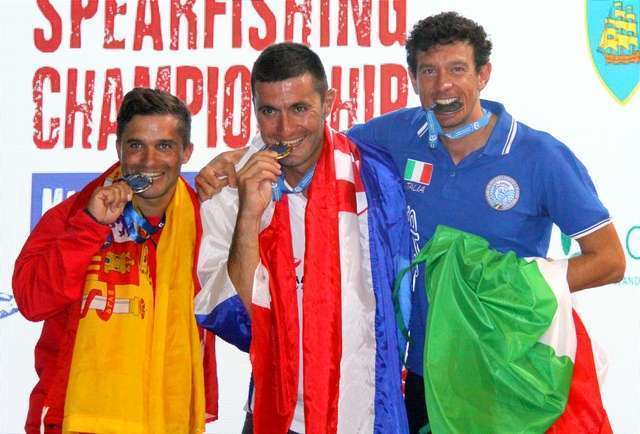 The XXXI Euro-African Spearfishing Championship has emotioned us, with its extremely tough weather conditions, the wonderful location of Mali-Losinj, in Croatia, motherland of spearfishing, and the 51 competitors coming from 18 different nations. The winner? But of course the super favorite, Daniel Gospic.

The local Champion, Daniel Gospic (Cressi) of the Croatian Team, has not downlet expectations and has been constantly very focused, but also calm, even though he finally admitted to AP that the pressure was a lot. It is true that Daniel Gospic is the most expert, among the strongest athletes in the world, the local champion and already World Champion in Mali-Losinj in 2010.

First has also been the amazing Spain, back at the top of the teams classification after a relatively poor performance in the last World Championship, in Syros (Greece) last year, where the team was final 6th, with a big distance from Greece, Italy, Croatia, Cyprus and even Tahiti.

Scouting period has varied sensibly for different teams and athletes, an aspect that has determined respectively advantages and disadvantages for the participants to the competition. Moreover, weather and sea conditions in the last ten days of scouting have been constantly very bad, with rain, wind and extremely rough sea.

The bottom of the sea of Mali-Losinj is a difficult field to compete in, with grotto and fish that can be found mainly in holes. This is partially why congers have been key for final result (minimum weight 3 kg for maximum 5 congers per day). So there has been very little white fish, such as breams (sars) and croakers (corvinas), and zero groupers caught, which were seen by some (for example De Mola), but disappeared during competition due to strong current. The total catches, apart from some mullets , croakers and breams, have been totally made of congers, musdelas and some refish.

The type of sea bottom and of preys caught has confirmed the importance of the scouting phase, which needed sufficient time to sign the highest number of holes of congers and musdelas, the main catches of this Euro-African.

If the scouting days have had bad weather, the first day of competition has confirmed such trend, with acceptable conditions until 10 – 11 am, when competition has started and ending 5 hours later, but changing suddenly with strong South-East wind to make everything more difficult for competitors. Waves, wind and some rain, but especially current, have modified considerably sea conditions underwater, making fish seen until the day before move and hide.

Croakers, some caught even of good weight (around 2 kg), and the groupers, instead totally absent int his competition, have moved a lot, while congers have been more stable in their long and thin holes in the grotto.

Current has so made it very difficult to position the float marker, which moved easily from the correct position, making the spearo loose the position found during scouting. Luckily sea had very clear water, helping to find the correct points on the bottom, and locate fish in the holes, like congers, which have been caught in big numbers and great dimensions (the heaviest was finally 17.960 kg, where minimum weight is 3 kg as anticipated in the presentation article by AP).

The first day of competition it has been Daniel Gospic to prevail, certainly knowing better than others how to move in “his” sea, even in bad metereological conditions. Amazing at the end was the number of his catches, with 17 fish, of which 5 congers, and total 27480 points.

Even more behind the World Champion George Vasiliou (XT Diving), of Cyprus team, who has not found the right key for day 1, also deconcentrated by a lost dentex (snapper) of around 10 kg in the very first dive.

If day 1 had been with rough sea, wind, some current and rain, day 2 has been even worse. Almost total calm at the harnour from 8 to 9, wind has suddnely hit hard together with rain, at moments very strong. But more important, current has grown considerably , a situation that the new Champion Daniel Gospic has indicated as extremely difficult and annoying. Not only, also the total lack of sunlight, due to big black clouds covering the sky, has determined reduced light at deep depths, making well complicated hunting, especially congers in the holes in the grotto.

Even though competition field B was indicated by many as the less rich of fish, and despite these very bad weather and sea conditions, total number of valid preys in day 2, 197, has been greater than the ones in day 1 (189).

To enrichen considerably the total number of catches of day 2 has been the Spanish Oscar Cervantes, who has reached the number of 17 valid preys caught by Gospic on day 1, even though total points have been slightly inferior (26500 pts), conquering the first position of the day and for a moment generating some doubts for final result of the competition. Unfortunately for Cervantes, Gospic, with 15 valid preys and 24910 points (94%), has arrived second and very close to the Spanish, conquering the title of the XXXI° Euro-African Spearfishing Championship, a leaving to the Spanish champion the second position. Among the strongest of day 2 has been the Italian Giacomo De Mola, who has improved performance compared to day 1, with 13 valid peys and 21590 punti (81,47%), assuring himself the final absolute 3° position of the Championship and the podium. Also, a local athlete has improved his performance, Rodaslov Jakupovic (Zero X), fourth of day 2, with 14 valid preys and 21490 points (81,09%).

Performance by Xavi has been anyway suffcient, together with the one of the extremely strong Oscar Cervantes and of Samuel Tomas, final seventh, to conquer the very much deserved first place by Spain in the teams classification, thanks to the good results by all the three Spanish athletes.

Third is Italy, who had great expectations, especially due to the long preparation of one if its athletes, Stefano Claut, who lives in the near Trieste. Third place is a good result, considering also the net advantage on the fourth, Cyprus, even though third and fourth position of De Mola and Claut could have led to an even better position. Unfortunately Dario Maccioni (Cressi) has not had two good days, with a final 13° position, 18820 points (67,79%) and 11 total valid preys. From such a Champion, the best of the Italian team at the World Champ in Syros last year (and his first World Champ), one could expect more, but performance has been influenced negatively by the short scouting of only 2 weeks. On this point, comparison is with athletes who have been at Mali-Losinj many times, such as the Slovenians, who every year compete in their National Champs in Nerezine, 15 km from Mali-Losinj, or with his teammates, with De Mola scouting for 22 days and Claut spending many weekends on the sport for 3 months, before starting preparation with the rest of the Italian team. To win second position in the teams ranking Maccioni would have needed to be 8th, immediately behind Samuel Tomas, with at least 109,585%.

Comments by the athletes

Tension was there all the time, with friends, relatives, fans, sponsor and media expecting nothing but my final success. I was born here, so I know this sea extremely well, but sometimes being too sure about final success can be a problem, and if things turn out bad, this can lead to failure. I am really happy of the result as I was born here. I have not still realized completely my achievement, also due to much fatigue, but this is certainly a great satisfaction. Competition has been good, even though current of second day has been extremely strong and has determined difficulties in fishing below 35 meters of depth. In day 1 I have immediately caught many preys of good weight, while in day 2 catches have been slower and until the end I did not know if they were sufficient for final victory. Fortunately, I have caught 4 fish in the last half hour of competition. The first day, I must say, had started in the wrong way as I had lost a good musdella of 1 kg, while Oscar in the meantime had caught two fish. For the future I have decided to stop with team competition, and focus more on individual and, of course, my family.

Certainly the team has been one of the key aspects that have helped me to conquer second individual position, as we are all very united, and also, I must admit this sea is very similar to the one I am used to fish in Spain. I cannot say which is my winning characteristic, but my captain would say it is the capacity of changing strategy with changing conditions of the sea, in addition to my axcellent apnea skills. Among the first and the second day I have not changes my strategy, but I had more points in zone B, and this is also a reason for best result on second day. This, even though strong current and wind have not permitted me to visit many spots I had found during scouting, and also water on day 2 was less clear. I am very happy for my second postion and the first by the team.

The first day unfortunately I have lost 3 fish, one bream (sar) and two musdella, and this has been the difference compared to day 2. I do not think though I could have anyway caught the first two positions and so I am very satisfied with the podium. Moreover, competition has been of an extremely high level and very technical, so I can be happy of my performance. A the beginning of the scouting I thought I could catch some big fish, since I had seen also some nice grouper, but with the change of underwater conditions with strong current I knew the groupers would not have been there anymore, so I did not even go to verify this. Current, moreover, was influenced by tide, so it went six hours in one direction and six hours in the opposite. The first day I have fished at – 30/32 to – 38 meters, in an area where fish had to be searched more, while the second day I have fished on flat long rocks at – 38 to – 40 meters. Finally, it has been nice to catch my firstSan Peters’ fish.

I am not satisfied. Maybe I would have preferred the fifth position, instead of the fourth just a few points from the third. I have had problems with current in day 2. So I have not started well, catching only some fish, and so I have moved to sheltered areas that I had signed, but I have found very little, probably because other competitors had already fished there. I must say that in two days of competition I have not missed a fish. Scouting had gone along well, but there was never such current as the one present during comeptition, something that got me unprepared. Now I would say that maybe it would have been worth to prepare the strategy on less deep spots (he has fished deeper than – 40 meters), to be able to avoid the difficulties created by current. Certainly Giacomo and Oscar are stronger in the current as they are used to it. Also, I have been too warm both in the first day, with 5 mm wetsuit and corsage, and the second day without corsage.

The first day has been particularly difficult. I have had immediately, in the first dive, the opportunity to catch a great dentex (snapper) of around 10 kg, but had no success. From then for some time I was deconcentrated and my shots were unsure. This is how it goes. The second day, for example, I have immediately fished on a spot where the was an Italian, (Dario Maccioni ndr), and have managed to catch two fish while he anticipated my dives, but came back with no fish. I think this has not been easy for him. These situations influence negatively any spearo, event the strongest and most experienced.