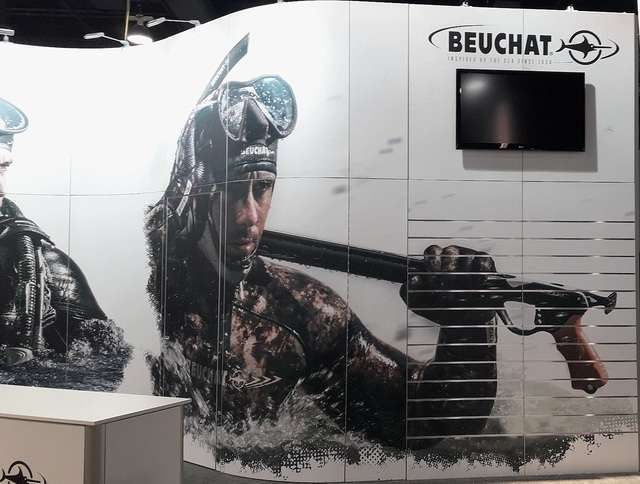 At the Dema Show 2016 an important and historical French company, Beuchat, has presented interesting novelties about wetsuits, masks and drop vests.

We have met Cyrille Torres, Strategic Marketing and Communication Manager at Beuchat. With him we have talked about the main novelties by Beuchat at the show in Las Vegas.

Among wetsuits, where Beuchat is leader, the Espadon Prestige is completely new and the top of the line of the French company. This wetsuit is complete with an interesting camouflage solution, called Magic Camo, extremely elegant when the wetsuit is dry and external color is more uniform, while the camouflage solution appears with more evidence when the neoprene lining becomes wet. The camouflage design is distributed only in some areas, for example a band across the chest and on the arms, alternated with the neoprene black solution. In this way the image decomposition technique is obtained.

Wrists, ankles and the face contour have a folded neoprene part which is smooth outside and lined internally, to seal and give comfort to the wetsuit. There are no seams on the face contour, nor under the chin, where the vertical seam actually stops some cm before the edge. The sternal protection is 8 mm thick, with 3 additional mm glued internally on the 5 mm jacket, while the external liner avoids slipping when loading the speargun.

The Espadon Prestige also offers a patented solution for the trousers, called PreCut System, sold with the braces, which are though easily eliminated cutting along a predefined line. This solution is very useful for shops that can so adapt easily in-house to the requests of the different customers, but it is also a solution that helps rookies who buy the trousers with the braces, and after some time with more experience decide to eliminate them. The Espadon Prestige is available in thicknesses of 5, 7 and 8 mm.

On the Espadon we find also the patented solution, launched in 2014, of the Braca Concept, which substitutes the traditional liquid out valve. Surely the solution by Beuchat looks much better and permits to evacuate urine through a special opening in the front of the trousers. This solution is interesting and needs a test.

Neoprene utilized by Beuchat is not Yamamoto, but it is a material, named Elaskin X, with specific characteristics of excellence for the use on spearfishing wetsuits. The liner is made of special quality Nylon. The cut and orientation of the different pieces of neoprene are carefully positioned for maximum comfort.

The camouflage solution X-Ray Camo, with a printing system which puts together 50 different images giving a tridimensional effect and full of details, such as small fish.

Very interesting and useful for safety is the “Safety spot” solution, a big orange star printed on the back of the jacket. Such image does not really effect camouflage, which in fact is key frontally on the wetsuit, while the back is hidden to fish. At the same time, especially in low visibility conditions, Safety spot offers a better chance of seeing the spearo in the sea, both on the surface and under the water, on the sea bottom. The orange color is considered by Beuchat more effective than white, as the latter can loose strength when sunlight is strong and hits sea surface and sea bottom.

New and nice are the drop vests with camouflage X-Ray Camo and Safety Spot solution, or total black design. Also important is the simple and effective addition of a whistle positioned on the right shoulder. The drop vest are complete with a one hand quick release system, also useful for safety reasons. Maximum wait that can be added to the drop vest is 6 kg.

Extremely nice and interesting the absolute novelty and preview by Beuchat at the Dema Show, the frameless mask named Lynx, a solution until this year missing from the product line of the French company, and that will be on the market beginning of 2017. Certainly an interesting and quite unique product, that fortunately shows many efforts by Beuchat in R&D, and differs with strength from the more and more widespread Chinese masks, which are all the same and are invading the market of spearfishing. The product seen on Beuchat stand is not yet the final one, but surely aims to have an extremely low internal volume, which should be around 99 cm3. We will verify internal volume and field of view adding this mask, as soon as it is ready, to our masks super test.

On the spearguns side the Beuchat product line is very complete on sling guns. Interesting is the top of the line product, the Marlin Carbone Revo Concept, with solutions similar to the roller, but patented by Beuchat.

Moving to freediving, Beuchat presents Vento, the single piece wetsuit made for the sea but excellent also in the pool. No plans though at the moment by Beuchat to sponsor any international freediving athlete.

Beuchat is also present in the swimming and triathlon sectors with swimwear and specific wetsuits.

We have then interviewed Cyrille Torres on the market situation in the spearfishing sector.

AP: Which is the market trend?

CT: The situation is good, but slowed down by the unfairly negative image of spearfishing. Unfortunately, the sector compared to other fishing techniques is very small, and so it is being attacked politically. It is easier to give to spearfishing the responsibility of critical environmental problems in the sea, while instead it is the most selective and less destructive fishing technique, of course if one follows the rules. Beuchat supports selective spearfishing, based on quality and not quantity (big and not numerous preys), following the laws, for the total respect and protection of the sea.

AP: In addition to France, evidently your main market, which are Beuchat most important markets?

CT: Certainly Spain, where Beuchat is much known and appreciated and, out of Europe, Oceania, Australia and New Zealand. We also aim to grow in the Italian market, full of passionate and professional spearos. Finally Russia, where spearfishing is practiced in the lakes.

AP: And what about United States?

CT: It is the biggest market of all, but today Beuchat is not yet widespread. We have one year ago modified our strategy moving from a distributor to a direct relation with shops, which is giving good results. Apart from finding a very good distributor, we will continue in such way.