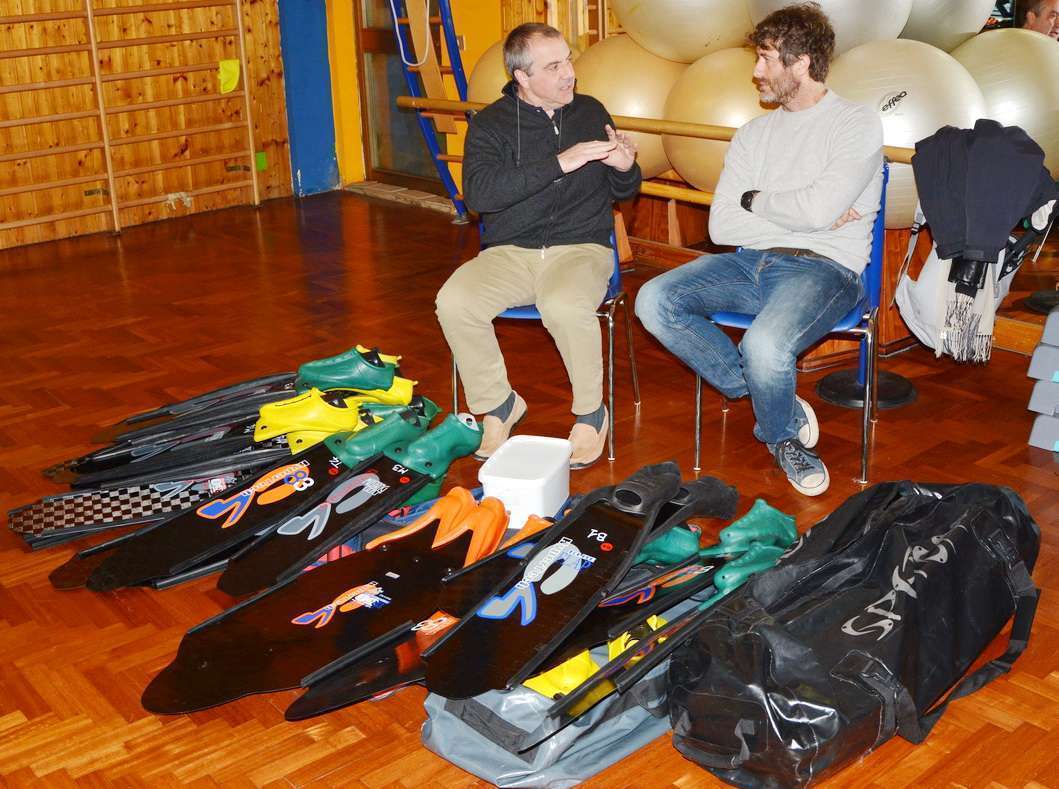 The new HT fins line by C4 is a new and additional revolution in the carbon fiber blades, with a material that adds its qualities to the deep experience by C4.

C4, leader in the field of carbon fiber blades, and, more important, the company that has actually invented fins with carbon fiber blades, revolutions once more the market thanks to the HT line, already deeply presented through an interview with founder and mind of C4, Marco Bonfanti. Very confident in the quality of its products, C4 has planned a number of appointments on the Italian territory (hopefully this will be repeated in different countries), to let passionate touch and test in the pool the entire HT line: Mustang-HT, 83-HT, Blue Flap-HT e Red Falcon-HT. A great initiative to which Apneapassion had to take part.

Marco Bonfanti has briefly presented the new HT line, putting in evidence the qualities linked to the new carbon fiber Hypertech TR50 “BigSquare” Prepreg. The reduced number of crossings of the material, compared to the traditional carbon fiber and also to the T700 utilized on the non HT C4 blades, permits a greater reactivity and return of the elastic force, together with the new material being, as indicated by C4, 40% more resistant than the “classic” carbon fiber. Bonfanti has also wanted to remind about the advantages of the ergonomic foot pocket, another revolutionary solution by the Italian company, a product now known worldwide. Such foot pockets, that copy the shape of the foot, and for such reason have a left and a right, offer the great advantage of having a curve of 3 degrees under the foot plant, which copies the position of the foot when kicking. The angle of 3 degrees is then not concentrated in a single point, but distributed along all the foot pocket, in something that is more a curve than an angle, a situation that permits to reach maximum comfort. Not only, also the EVO water rails patented by C4 have been re-presented, putting in evidence how the water flow that is moved by the blade does not flow laterally as it can happen with blades that have traditional lower rubber profiles.

First of all it must be underlined that the event in the swimmingpool, though a very good idea, has the limit of permitting the test only horizontally, either underwater or on the water surface. The possibility of evaluating situations as the restart from the bottom or the ascent from important depths, key aspects and something on which C4 has worked and tested the HT a lot, was then not included. Anyway, the test has permitted to evaluate some differences between the 4 models of HT fins and their different hardnesses. The tests have taken in consideration the following fins: Mustang-HT hardness 25 and 30, 83-HT hardness 25 and 30, Red Falcon-HT hardness 25 and 30, and Blue Flap hardness 30.

These are the fins fully dedicated to the sea and spearfishing, with short blades if compared to the rest of the HT line, with dimensions of 855 mm x 200 mm and angle of the blade equal to 29° plus 3° of shaping of the ergonomic foot pocket. The test in the pool has put into evidence two main aspects. The first is the incredible push offered by the fins both on an acceleration and speed point. It is in fact particularly evident how at each kick the blade offers a sensation of thrust much above avarage. Different is the effect on the water surface, where the Mustang-HT suffers a little bit the rigidity and the height of the water rails. The blade does not bend much and it is hard to keep the fin under the water surface. On this point the situation improves with the hardness 25 blade, a choice that we recommend to all those divers that are not very trained at the top. The load of water generated by the EVO water rails, on one side improves the thrust, on the other it is felt on the legs, especially with hardness 30 blades, while with the hardness 25, softer, the result is more easily manageable.

The ergonomic foot pocket once more gives a feedback of extremely high comfort and a sensation of perfect connection between leg, foot and blade, with consequent higher confidence and effectiveness of the kicking. Anyway, it is clear that the C4 Mustang-HT are principally indicated for vertical dives in the sea, where evidently they can express all their potential and technical qualities. The following videos show the test of the Mustang-HT 25 and then the 30. The difference of the bending of the blades in the two situations is evident, confirming the net difference of rigidity between the 25 and 30 blades.

Much more traditional of the Mustang-HT, the Red Falcon-HT have all the evolutive qualities of the HT carbon fiber, but have the foot pocket (in the test the Mares Rasor have been used), rails (14 mm high) and the shape of the final flap (concave with fish tail like shape), with traditional solutions. The special lamination of the blades permits them to bend in a D.P.C. way, (Double Parabolic Curve), determining a very fluid kicking. The dimensions of the blade are greater than the Mustang-HT and equal to 865 x 207 mm. Anyway also the Red Falcon-HT are addressed mainly to spearfishing.

The sensation offered by the Red Falcon is the ease of use, with a very valid thrust, but surely not equal to the Mustang-HT. The bending of the blade, thanks also to the greater length, is greater, as greater is the sensation of fluidity of the movement. The Red Falcon are surely fins that are less technical than the Mustang-HT, and addressed to a less expert spearo, but much easier to use. In the video that follows it is clear how the kicking is more fluid compared to the Mustang-HT.

The 83-HT, intended for freediving, are the fins with the longest blades, with length equal to one meter, but with lower width, and precisely 1.000 x 196 mm. Due to the great length, the 83-HT are thought for freediving. As all the fins of the HT line, the 83-HT are made with the Hypertech “BigSquare” TR50 Prepreg carbon fiber, and are complete with the ergonomic C4 foot pocket. These two solutions permit optimal transmission of the movement from the foot to the blade and an extremely high elastic return of the force impressed. Final flap is convex and extremely extended so that it strongly reduces the swirls of water at the end of the blade and so the loss of thrust. As the Mustang-HT, the total angle between foot and blade is 32°, 29° of the blade and 3° given by the curve of the foot-pocket. The EVO water rails are not used, and instead traditional constant section rails are mounted to obtain maximum fluidity. Maximum speed has been the focus of C4 in designing the 83-HT fins.

The feeling in the pool is great, with a top speed that is above all the other HT models, except maybe the Mustang-HT. Also, the fluidity and the lightness of the blades are extremely high. With hardness 25 it is also possible to move on the water surface with good comfort and no real effort. The sensations overall are so good that we would recommend the 83-HT also to spearos, evidently to those who tend to fish using specific techniques such as the waiting technique, the technique of the glide on the prey and the fishing in the blu.

The following video shows the test of the 83-HT hardness 25 fins: fluidity of the movement and perfect bending of the entire blade are evident, determining an optimal use of the elasticity of the HT carbon. Also the great length of the blade is also evident.

In the water the sensations given by the Blu Flap 30 (25 were not available during the test) are of performing fins, but a little rigid and with a sensation of greater weight compared to the rest of the HT line. Speed is there, but we need a little time to reach the maximum, while easiness of use that we had with the Red Falcon is slightly lost. It is clear that a vertical dive test could express better the qualities of such fins.

In the following video the test of the Blue Flap-HT hardness 30 is shown.