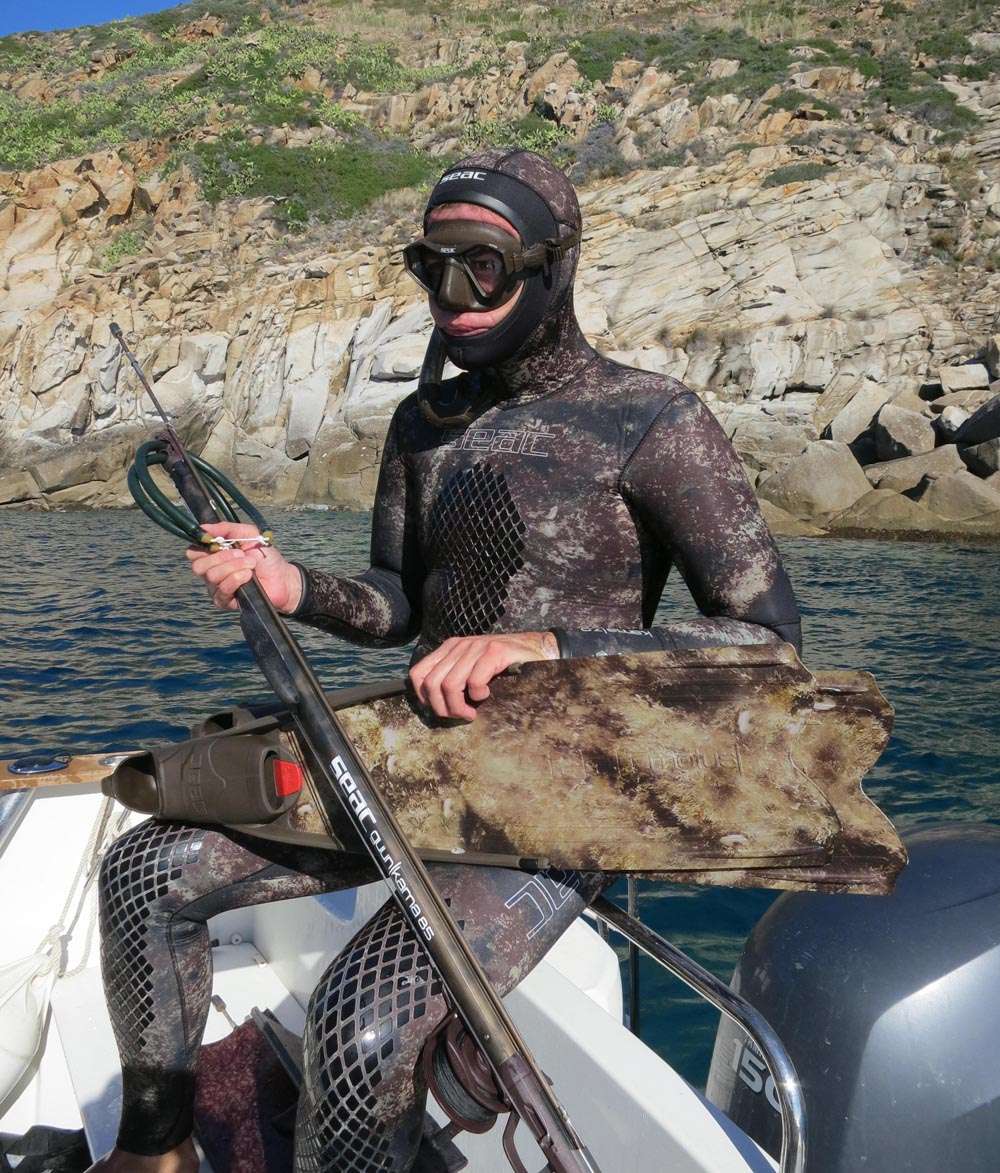 After the presentation of the New Seac products 2016 for spearfishing, AP has tested the new Kama 7.0 wetsuit.

The new Kama 7.0 is made of lined exterior (with super elastic Extraflex nylon) and open cell interior neoprene. The new graphic 2016 by Seac, the Kama, is also present on the Motus Kama polymer fins and the One Kama and Fox Kama masks and mouthpiece. In addition to the 7 mm version, Kama wetsuit is also available in 5 mm, both for trousers and jacket. The neoprene is sewn externally and glued internally to avoid any infiltration. The cuts of the neoprene in the thorax, arms and legs are anatomic and pre-shaped, with the two latter that are pre-bent, to give best comfort during swimming and breathing. The lower closure of the jacket is done with two clips. Trousers have high waist for maximum thermal protection of the waist-stomach and loins.

The Kama wetsuits, just like the 7 mm tested, have interesting characteristics, starting from the face area. This is made of differentiated thicknesses, with a contour, 4 cm wide, which is 5 mm thick with the 7 mm wetsuit, and 3.5 mm thick with the 5 mm wetsuit. Such solution increases comfort of the face area, which is generally the most delicate and that is marked by long spearfishing sessions. The differentiated thicknesses solution is equipped with a double folded hem of soft neoprene, which is glued with no stitching to the thinner part of neoprene to maintain maximum softness of the structure. Another area with thinner neoprene is the lateral part of the cap, with two zones that cover the ears.

Another interesting solution is the internal sternal protection (Pad-In), which positions itself between the two pectoral muscles, adhering best to the body, reducing in such way the possibility of having sacs of water between the neoprene and the skin, improving thermal isolation properties of the suit itself. Such solution has also a neater external design.

Still remaining in the sternal area, with a solution present also on elbows and knees, is the anti-slip rubber cover made of a pattern of rhombuses applied with the PU Print 3D system. Such solution, which presents the rhombuses one detached from the other, avoids the rubber cover limiting the elasticity of such areas, with great advantage to general comfort.

The closing profiles around wrists, ankles and face profile are in double folded Glideskinneoprene, internally lined in Superstretch texture, to obtain a sealing effect and tear resistance.

Among the qualities of the Kama wetsuit is for sure the accuracy of the stitching and, most of all, the internal bondings. After a careful check along all the lines of contact between different parts of neoprene, it is confirmed that no areas of even the tiniest detachment of the neoprene parts are present, demonstrating a very high manufacturing standard. Even pulling with great strength the glued together parts of neoprene in the most critical areas, such as the chin and the underarms, with zones of 4 and 3 different neoprene parts coming together, the bondings have shown to be impeccable.

The neoprene used is not the famous and esteemed Yamamoto, but has been selected after long and deep studies by the R&S department of Seac, obtaining a very high quality material for an adequate price. To the touch maybe softness is not at the level of the most performing Yamamoto, but it has certainly a very high resistance to cut and tear, meaning also scratches made with ones’ nails.

Test in the sea

Test in the sea has been carried out in January, during the Winter period in Italy, along the coast of beautiful Tuscany (Argentario), moving around with a boat. The minimum water temperature indicated by Mares Smart Apnea was equal to 15°C (59°F)

The Kama wetsuit during dressing and undressing has resulted to be sufficiently soft, even though the 7 mm of thickness and the lined exterior are, evidently, quite heavy. The internal open cell neoprene obviously needs some lubricating liquid such as water and soap. The strength of the lined neoprene, the stitching and the perfect bondings avoid any risk of damaging the wetsuit in both phases, with the possibility of pulling each part of the wetsuit with great strength and leveraging on the beaver tail. It will clearly always be important to wet and use soap also for undressing, to avoid the jacket, folded on itself, getting stuck and becoming a problem to take off.

Once worn the wetsuit, comfort felt is very high, thanks to the valid pre-shaping of thorax, legs and arms. Some minor bother coming from the area of the chin that, from our test (partially depending on the shape of the head of the person testing the wetsuit) has resulted to be a little too tight. Still considering the cap, the thinner neoprene area of the ears is positioned too much at the back of the head. This determines no negative effect and no real bother, but surely reduces the positive result of the good solution from Seac. During use one can feel the strong and important stitching at the back of the knees: again, not a real issue, but the sensation is present.

Once in the water, the Kama wetsuit results to be extremely warm, without areas of infiltration of cold water, such as the frequent zones of the lumbar area (anyway, always check that the clips are correctly screwed on the jacket, keeping it sufficiently low on the trousers to avoid water passage), the face and behind the neck. This demonstrates the excellent pre-forming and measures of the Kama, that avoid leakage and water sacs between neoprene and the body of the spearo. To this contribute also the folded double neoprene profiles of the wrists, ankles and face. High waist trousers help maintaining, also with 15°C (49°F), optimal thermal isolation in the stomach, waist and lumbar area. The profile of the cap adheres well and covers sufficiently the face, protecting from the Winter cold. With the Kama 7.0 spearfishing session has been carried out at depth of maximum 15 meters for more than 3 hours with absolutely no feeling of cold.

Thanks to the external liner, the Kama 7.0 has the advantage of an incredible resistance to abrasion against rocks. The liner is relatively elastic, but also has a good thickness which is particularly tough, protecting the neoprene from shocks.

In the sea floor of Argentario, in Tuscany, the Kama camouflage results an optimal solution and integrates perfectly with the rocks covered with algae. Kama wetsuit is also available in black (no camouflage).

The external liner of the neoprene of the Kama absorbs quite a quantity of water and does not dry up at all during transfers, especially in cold periods, when the 7 mm model is used. This is the classic limit of this kind of neoprene, which can be cold during long transfers on the open boat. Viceversa, in the hot periods the wet liner avoids overheating under the sun. Clearly, this last condition does not impact Kama 7.0, which is indicated for cold climates, with water below 20°C (68°F).

Click Like on the Facebook page of Apneapassion.com to be alerted on the publishing of the second part, and final votes, of the test on the new Seac Kama 7.0 wetsuit, and for news on other spearfishing and apnea equipment.