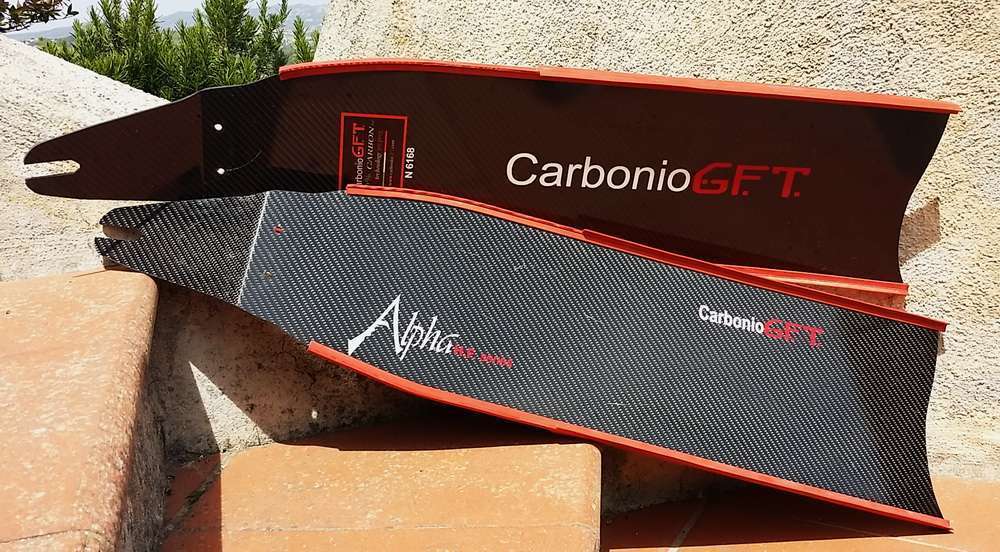 We had already seen and presented them as World Preview at the Eudi Show 2015 in Bologna, Italy, and after that at the Kedada 2016 in Barcellona, Spain, but finally the new prepreg carbon fiber Hot Forming Alpha blades by GFT have arrived in the Apneapassion offices for a first impressions presentation and, soon, the test in the sea.

It is quite evident how Carbonio GFT has always has in prepreg and the perceived quality of its blades a great strength, and this is even more evident in the Alpha blades, extremely refined in the construction and in the visual quality of the polished surface of the carbon fiber, which is outstanding. This does not necessarily represent a total guarantee of resistance and performance of the blades, but it certainly evidences a production process that reduces imperfections to the minimum, and so also, theoretically, the weak points of the blades themselves. More then this anyways is the Hot Forming process (from which the H.F. acronym comes), which permits a precise control of the temperature during hardening phase of the resin, so that internal pretensions of the final carbon fiber are eliminated.

As already seen in the article of the Eudi Show 2015, the new GFT Alpha have a stratification of the carbon fiber sheets that make an X shape on the blade, visible with the reflex of the light. Such configuration, different from the one of the Aero, which has a V shape, aims to a greater top speed, accepting to loose something in initial acceleration.

The specificity of the Alpha is their asymmetry, which determines to have a left and a right blade. AP has meaured the blades, reporting, taking as reference the two hols fort the screws connecting the blades to the foot pockets, an external length of 74 cm and an internal one of 72 cm. The width of the blade, measured from the internal part of one water rail to the other, measured 21.3 cm. The water rails themselves have been modified and are now much smaller and lighter than the previous ones (weight reduced from 100 gr to 30 gr. The height of the rails is equal to 1 cm per side (below and above). The weight of the single blade is equal to 375 grams, of which 60 grams are due to the two water rails on each blade. Foot-pocket blade angle of the fins sent for the test is 24°, but now available also 32°.

The Alpha, to the contrary of the Aero, which are available in four different stiffness levels, Super Soft, Soft, Medium and Hard, have only one stiffness. In the test out of the water the blades seem to be anyway quite flexible and not too stiff, but most of all the fact that indicates the behavior of the blades is the fact that they flex in a quite uniform way all along the blade. In such way all the blade works well to obtain thrust and also to accomodate the kicking movement of the diver. You will be able to read more in the test in the water of the Alpha blades. In the meantime, below, an anticipation.

The Alpha blades sent by GFT were made to perfectly adapt to the Delta One K-Reinforced foot pockets by Salvimar, but it is also possible to request blades made for Pathos foot pockets and GFT sold foot pockets, named “Slippers”. Mounting the Alpha blades on the Salvimar footpockets has been pretty easy, with the only necessity of cutting the upper and lower part of the water rails in the length where the longerons of the footpocket will be positioned.

Click here for the technical data of the GFT Alpha fins.