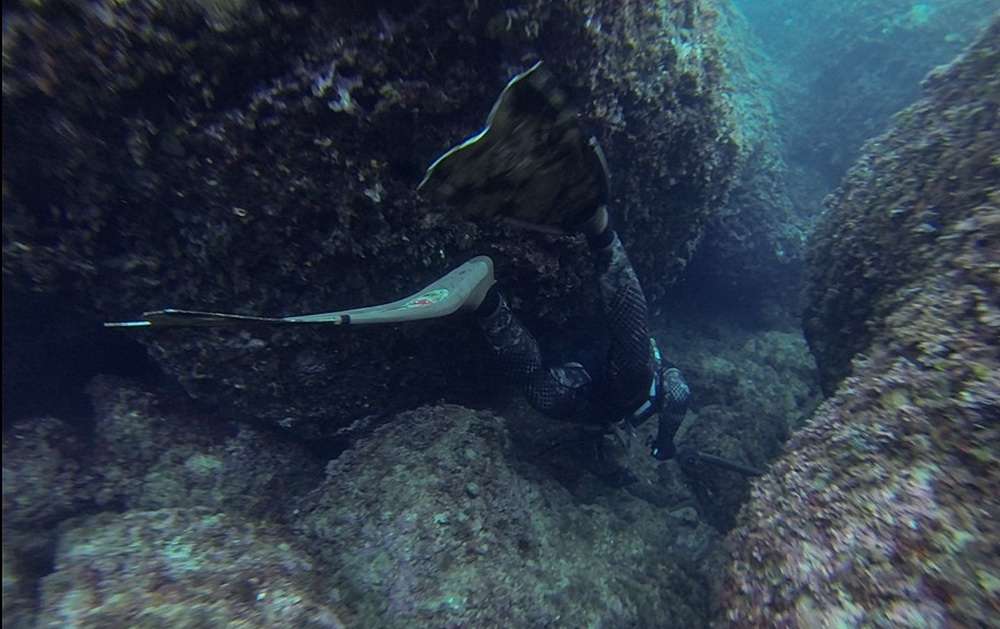 When very cold water is present, such as in Winter, and there is movement in the sea (boat, swimmers ect.), spearfishing in open water gives little results.

We shall need to change tecnique and spearfish in the lairs. This is one of the most important qualities of the spearo, being able to adapt to different meteo-marine conditions to find preys.

Even though today it is quite difficult to find lairs full of fish and, often, it is possible to catch only one prey before the rest of the flock hides deeper in the lair or flees away in the open water, spearfishing in the lairs can be a good solution valid when no fish is seen in open water.

Base is the approach phase to the lair, else we will catch no fish, or simply see its tail when it is getting away deep in the lair where it cannot be reached. Descent phase will not be direct to the hole, so never horizontal, but vertical and/or lateral. If one reaches the lair vertically the technique to be used is quite difficult, as we will need to appear head down, so we shall need a lot of training. Simpler is to appear laterally to the lair, which is a very effective and easier technique. We will face the lair at the same time with the face, the speargun and, if needed, the torch. In such way the fish, that will look outside the lair towards the light, will not see a big shape coming close, and will so not be alerted. Often the spearo descends in an uncorrect way towards the lair, and thinks all the holes are free from fish, but it is not so: simply groupers, breams and other fish will have already hidden or left the lair, because they will have seen the big predator (spearo) coming towards them.

In the lairs that are already hit by light coming from lateral entries, torch should not be used, as it would make the fish flee immediately. On the contrary, with a completely dark hole, the prey will remain still for a few moments, so the use of artificial light will be appropriate.

It will also be a good idea to look, where we think a fish is present, in the lateral accesses of the lair, where the fish will not expect to be found.

The technique that is based on the check of every single hole in an area of the sea floor can give good results, especially with very cold water. So, for all spearos that are used to fish in open water, it is time for spearfishing in the lairs!