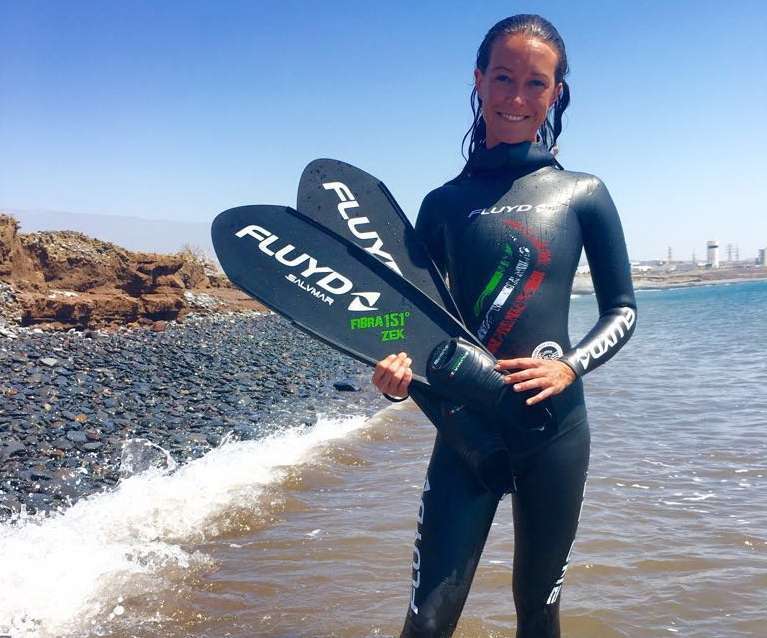 Alessia Zecchini will aim to the World Record at the Italian Championship in Ustica with the Salvimar Fibra 151° ZEK.

Alessia Zecchini, holder of many World Records both in apnea  Indoor and Outdoor, has officially announced to AP her will to try, in addition to the already communicated Constant Weight Apnea World Record with monofin (CWT), also the World Record of Constant Weight Apnea with two fins (CWT-BF), at the coming Italian Apnea Outdoor Championship, which will be held in Ustica next September. The fins? The new Salvimar Fibra 151° ZEK, designed and manufactured specifically for the Italian World Champion.

AP has asked Massimo Quattrone, Product Manager of Salvimar, a comment on how the new fins were born and to whom they are aimed to.

“The new Fibra 151° ZEK, made of Pre-Preg glass fiber, are manufactured using aluminum moulds inside autoclave at extremely high pressure and controlled temperature. The particular design of these new fins consist in the fact that they have been designed specifically for women freedivers, and in particular for Alessia, who is 1.72 meters tall for 50 Kg of weight. Previously women utilized also for apnea the Boomblast carbon fiber fins, which are great products, but not specifically designed for small and light athletes, such as most women. A champion such as Andrea Vitturini, who at the World Championship in Lignano this year, has conquered the new World Record in DYN BF, told me the Boomblast are for him the perfect choice, but still Andrea is a man with a strong body. Today more and more women are falling in love with apnea and freediving, so it was a duty to give them a product specifically designed for their needs. All the women athletes will now be able to have their fins for apnea, which will be together perfoming, but also adequate to small phisiques,” comments Quattrone.

“Alessia just by chance has tried a Salvimar product made of polypropilene, the Training Long fins, that compared to all other fins on the market made with moulds, meaning thermoplastic and thermorubber, have an angle under the foot equal to 151°, which is the 29° measured in the traditional way (180° – 29° = 151°, editorial notes)”, continues Quattrone. “Alessia has immediately liked such “plastic” fins, and in fact she has conquered the World Record, both in 25 meters and 50 meters pool. So she has asked Salvimar for an equivalent product, but in composite material, either glass or carbon fiber. In Salvimar we have evaluated this request as absolutely reasonable. We have so designed and manufatured the new blades with width, length and weight specific for Alessia, and have mounted them on the Salvimar Delta One K-Reinforced foot-pockets, that for the Italian Champion are size 38-40, worn with an insole. When Alessia has tried them she has commentd “finally a pair of fins for me!”, and this is by its own a success. Initially she wanted to use the new fins just in the pool, but then she has decided to try also some dives in the sea.”

After this short chat, AP has wanted to receive confirmation on the performance of the new fins directly from the World Champion, and has called her on the phone, in Ischia, where she is training, asking her a comment on the new Fibra 151° ZEK.

“With these fins I feel really comfortable and good. The glass fiber blades have a great thrust and at the same time are very easy to use. I love utilizing them and am enthusiast especially for the performance in the restarts from the bottom (and what bottom! editorial notes) and the ascent phase. For such reason I will utilize them (wow!) at the Italian Championship in Ustica in September, and I will try, as already communicated for the Constant Weight Apnea with Monofin, to conquer the New World Record in the Constant Weight Apnea with fins”.