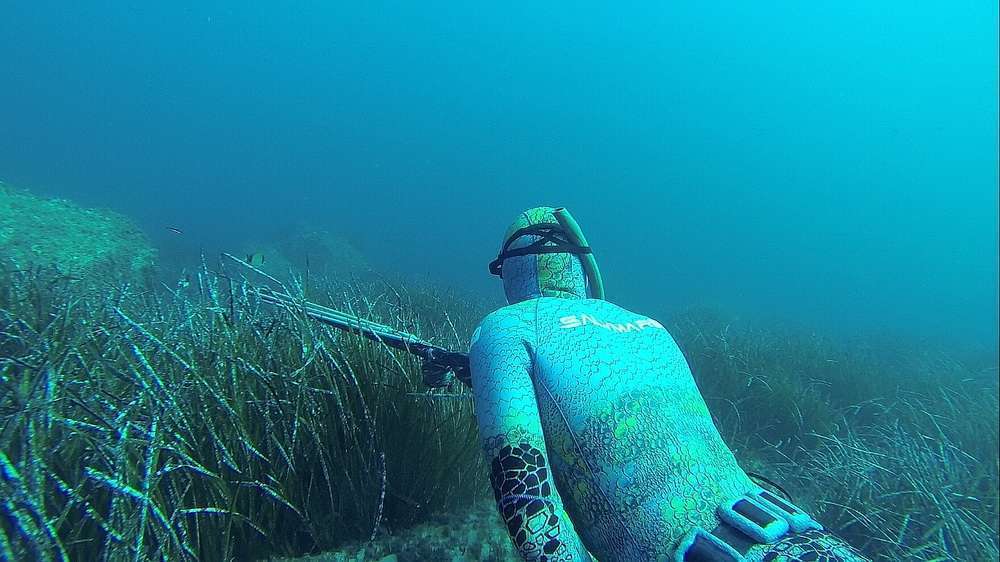 In the first part on camouflage we have analyzed in which way such phenomenon is effective in the sea and how the inhabitants of such a fantastic world see what is around them.

It is also evident that the term camouflage refers to all the techniques and elements that hide us from the senses of other living beings, preys or predators. So camouflage is also the technique with which we move and position ourselves during the spearfishing phases.

Starting from the surface, we need to avoid fishes seeing us from below before we even start our dive, else, in the majority of cases, fish will flee away, and only rarely they will let us get close. To do so, we will need, when possible, to hide behind outcropping rocks, or else make use of the sun in the central hours of the day, when it is vertical above our heads, positioning ourselves just over the fish, so its eyes will be flashed by the light. Else, in other moments of the day, we will need to avoid positioning ourselves above the fish. In this last situation, with the sun rays tilted respect to the sea surface, it will be advisable to start our spearfishing action from far away, descending and moving between the rocks on the sea floor until we manage to surprise the fish with an ambush, or position ourselves for the waiting technique.

Once on the sea floor, our movement will proceed extremely slowly with very short kicks, and, in the final phases, we will only use our arms, without kicking with our fins, to avoid movement of water, which would frighten fishes alerted by their lateral line sensors. Small slow movements will be able, to the contrary, to act like elements that will make fishes more curious. Finally, we will need to position ourselves in a way that we will be almost completely covered, for example by a rock, but will still have a good and wide visibility. If rocks are not present, we will need to use any cover, such as posidonia.

As we utilize the sun behind our shoulders on the surface, we will be able to do so also underwater, so that the fish will have rays in their eyes and will strongly loose their capacity to see. This, evidently, works in shallow or medium water, while at deeper bathymetrics the effect of the sun will be negligible.