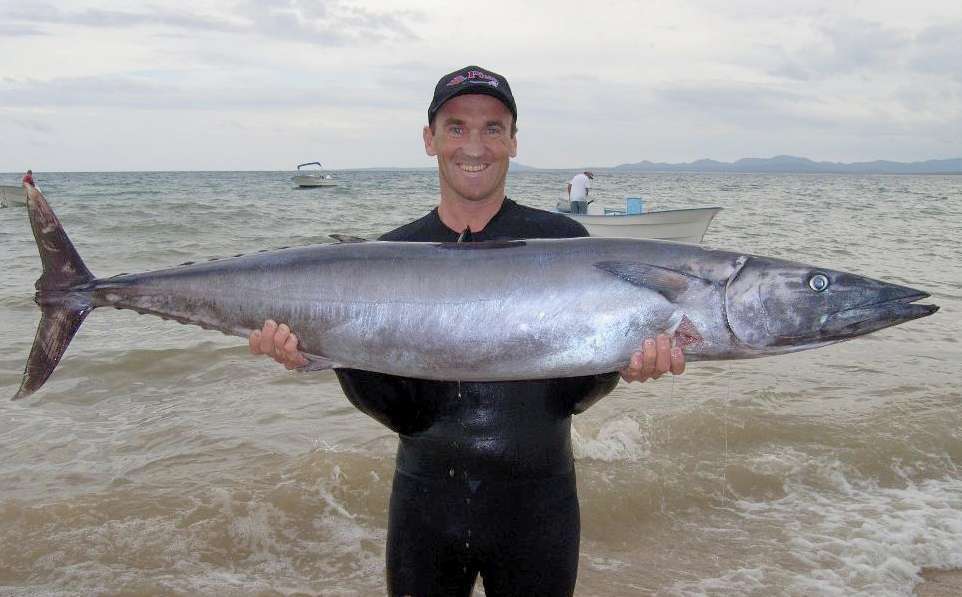 Valentina Prokic: How and when do you start with spearfishing?

VP: How and when did you start to compete in spearfishing? Are you still competing?

IP: I started diving in competitions in the early 80s and at that time the monthly Sydney events were very competitive. In my first year of the Alliman competition, I came in the top 20 but I won this comp the following year.

VP: What were and still are your goals in competing? Your best results until now, home and international?

IP: Originally, I wanted to win the Australian titles and it didn’t happen until I was 30 that I won my first Nationals. I ended up winning 8 Australian championships and one NZ National champ. I wanted to be more competitive in international competitions. We have a Pacific competition every year which each country hosts. It’s a pairs event with 4 divers from each country, Tahiti, New Zealand, New Caledonia, Australia, Hawaii, and Guam. I’ve been on several winning teams for this Inter-Pacific event. I have won the Bluewater invitational competition in La Paz two years in a row. At a CMAS level, went on 4 World Championships and placed in the top 20 three times. It’s hard for Aussi divers in these events because we don’t get any sponsorship other than equipment.

VP: Ian, you, for sure, have very interesting moments from the sea, sharks, great white?

Ian Puckeridge: In Australia, we deal with sharks all the time. I been bitten twice now but only by wobbegong sharks. The other sharks that have tried to eat me I have been able to fend off. We see tigers, whites, whalers and bulls, grey nurses, oceanic sharks like silver tips, and the occasional mako and we even had killer whales turn up during a competition on the south coast of NSW.

During my diving career, I have had many close encounters. Normally we just lose fish, but I have had a gun eaten. I was diving in dirty water and shot a 25 kg kingfish and had a bull shark bite the white handle of the speargun instead of eating the fish. Anything white attracts sharks and is a good color to avoid on your equipment.

I’ve seen a few whites, and white shark encounters are becoming fairly common. My closest white encounter was a big shark in clear water that took a large kingfish off my spear when I had the speargun in my hand. On my last reef trip in Queensland, I had a grey reef shark try to bite me but I was able to pull my gun across my body and it bit the speargun. On another reef trip, I was hit in the back of the legs by a shark as I was on my way to the bottom. Fortunately, it didn’t bite me.

VP: Can you explain the differences between spearfishing in Australia /New Zealand compared to the Mediterranean way?

IP: The main difference between Australia and NZ from the Mediterranean is fish! We have plenty of fish, lobster and sharks.  We do have to contend with current and often dirty water with large sharks. The diving is certainly better over here and vast differences in species and terrain between the north and south.

VP: How big is shark danger and how do you adapt to it?

IP: This is ever-present and my son and I just got back from South Australia which is the home of white sharks and we were wearing sharks’ eyes. A mask strap with eyes on it to discourage an attack from behind. While we were diving in SA we were using boat floats to keep our fish out of the water. On the last day Aaron jumped in with just a float and rig cord and a large shark took his fish off his float and dragged him back until it got the fish. Even where we live in Sydney white shark and bull attacks are becoming more common. An ocean swimmer was recently taken by a white.

VP: Where do you live and what is your favorite way of spearfishing and which fish?

Ian Puckeridge: I have dived all over the world. My favorite places to dive in Australia are the Queensland coast and Western Australia. Both states have good populations of big fish. One of my favorite fish to target in NSW is the Spanish mackerel for the hunt, the fight and their eating quality.

VP: Do you have any special way/secret/something different from other spearos that you use to catch specific fish or to find it?

IP: Probably my best ability is adapting to the conditions of the diving location. Whether it’s cold and dirty or warm and clear.

VP: Can you share with us an interesting story about one of your biggest catches?

Ian Puckeridge: As far as interesting catches, one of my best was a 150 kg black marlin that I shot in about 15 m of water at a local reef with a single band 1.3 m gun. It came in for a look after I shot a small amberjack and I chased it while I reloaded. As it turned its head it was too far away so I shot it about halfway down the body. I had a 100’ rig cord and a single float. Some dive, but this one stayed near the surface and dragged me a few km’s out to sea. I had a boat driver who stayed with me and threw me another gun to secure the fish.

VP: What do you prefer from equipment?

IP: I was originally sponsored by Picasso equipment but now the kids and I are sponsored by Torelli spearfishing equipment. These are the guns we generally use and swap for Collins spearguns when we are chasing tuna or marlin.

VP: What do you do for a living and how much time do you spend on spearfishing?

IP: I am an Electrician on the waterfront which still gives me the ability to get away regularly to the north coast to chase big fish.

Passion from the father to his children

As Ian Puckeridge is a great and famous spearfisherman, it was normal that his children followed his steps. Sometimes, children take different roads or have different passions, but in Ian’s case both of his children, Aaron and Lara, have entered the spearfishing world. Lara is 22 years old and already had results in her career.

VP: How and when did you start with spearfishing? I suppose the influence of your father was very big.

Lara Puckeride: I started spearfishing when I was quite young, to be honest, I can’t even remember exactly when. There was definitely a huge influence from dad to take up the sport when I was young and it did take me a while to liking to it. For the most part, when I was younger I stuck to dad like glue and learned everything through him.

VP: Was there a time that you wanted to practice other sports, not just spearfishing?

LP: I played a lot of sports throughout school but I was never as passionate about any of them as I was about spearfishing. Probably because I got to spearfish with my dad and brother making it a bit more special.

VP: Spearfishing between women in Australia is very popular or not?

LP: Spearfishing between women isn’t very popular, to be honest. Not many people do it but the ones that do are all great!

VP: Do you have any interesting stories/experiences connected with spearfishing?

Lara Puckeride: I feel like anyone who spearfishes has lots of interesting stories to tell. Some of my favorites would be encounters with different whales and sharks. One that stands out was when my brother and I got to swim with sperm whales. We went a mile out to sea out of Sydney in hopes of catching blue Fin tuna. My brother and I had a sick day from school, Aaron was studying for the HSC so he was reading his textbooks on the floor of the boat on the way out. We spent most of the day in search of bluefin but with no luck, so we parked up. I had already taken my wetsuit off when we spotted sperm whales coming toward us. I jumped in just in my bikini and got to watch a sperm whale and mother swim by. This was a pretty special experience.

Lara Puckeridge: My first competition was in Port Stephens when I was 14 and I won my age group. My best results in more recent years were the 2018 nationals where I won and the Inter-pacific the following year where we won with my partner Ash Shulter. I’ve only ever competed in one national and international and am still unsure if I will go in another one.

VP: How much time do you have for spearfishing? Your job is allowing time?

LP: Sometimes with work, it can be hard to find time, but whenever I can I try to get into the water. This has been hard lately because the conditions have been terrible because of all the rain. So as of late, I haven’t been diving much at all.

VP: When do you usually go and what do you like to catch?

Lara Puckeridge: I usually go with dad whenever we can find the time. What we are targeting depends on the time of year. In Summer and the warmer months, we are normally after fish. In Winter we are chasing lobsters and abalone.

VP: Is there any specific fish that you like to catch and do you have any special secret or way to catch particular fish?

LP: Mulloways has always been a favorite of mine. The main trick is to be super quiet, they are very noise sensitive and even a few bubbles can send them flying away from you.

VP: How does your mother look at the three spearos in the family?

Lara Puckeride: I think my mother was hoping I would maybe be another non-spearfisher in the family. I still remember when I was younger her telling dad he had turned me into a boy. Despite this, she is always very supportive and just worries about us when we leave and dawn and aren’t back till after dusk.

The best shafts on the market