A few days ago we had the pleasure of sharing a pleasant and informative chat with the great Spanish freediver Isabel Sánchez-Arán, in which we were able to touch on various topics related to competitive freediving and women in sports. Here we will show you a part of the interview, the one more focused on women in sports, and we invite the readers to a second episode more focused on freediving.

First, we will make a short presentation so that you can get to know Isabel Sánchez-Arán a little more. Isabela is freediving and recreational diving instructor, high-level athlete of the CSD, member of the FEDAS freediving department, president of the Spanish Association of Apnea Sports, certified diving guide of the Montgrí Natural Park, Illes Medes i Baix Ter, Co- director of the La Caretta Apnea Club – Costa Brava Freedivers and is fluent in several languages, carrying out translation work on topics related to diving activities. At the end of the article is a summary of her sporting history.

Bernat Castell. Hello Isabel, you were telling me that you started freediving as a sport in 2015 and after a few years the results are really impressive.

Isabel Sánchez-Arán. Good morning, the truth is that from the beginning I wanted a lot and I dedicated myself to training quite intensely. Imagine that after two years I had already managed to descend to -70 m. From there I followed a more competition-focused training routine.

BC. What has this year without competitions meant for you due to the pandemic?
IS. Since there are no competitions, last summer I was able to dedicate more time and give a boost to the freediving school that I manage together with Mara Torrealba. We have worked very, very hard. The truth is that it went pretty well, so this year if competitions resume, which I hope, I’ll have to think carefully about how to combine one thing with the other.

BC. How do you think women’s participation could get a boost?

IS. On the one hand, there is a need for greater diffusion of this sport and of underwater sports in general, because I see that the Spanish population has recently become detached from the sea, which is a pity. On the other hand, it is necessary that women who stand out in the world of sport are made known, so that they can serve as a reference for other women and thus encourage them to practice this sport.
I think it is also important that in promoting this sport to women, we must take care of how to do it, consulting athletes and/or specialized people on the subject of equality so that the message is correct in form and content and reaches directly women.
It is also good to correct some details, even if they are not decisive, but if it is possible, why not do it? For example, within the Catalan Federation of Underwater Activities, we are working on the issue of inclusive language in manuals, always in a practical way, so that everyone feels comfortable and identified. An example could be changing some namings that appear as masculine in other words that are neutral.

BC. You said that in Spain there is a certain disconnection of the general public with the sea.
IS. Compared to other European countries in the Mediterranean, it gives me this feeling, even if in recent times I have seen some news related to freediving on television.
In Asia, and especially in Korea and China, the love for freediving is increasing and the percentage of women who practice freediving is higher than that of men. Also, and without going that far, I was impressed to see the Italian team in a championship accompanied by a television team. These are things that are not usually seen here.

BC. How do you see the relationship between women and men, both in competition and in training?
IS. Usually pretty good. During the competition you don’t notice the difference, it’s all quite mixed. It’s only noticeable at the end of the day when you see there are separate rankings and medal awards for the men’s and women’s categories.
During the training sessions, the relationship with colleagues is excellent. Sometimes it happens that they give you help or take care of certain tasks, obviously with the best intention, but sometimes out of insecurity or comfort you get used to it and don’t learn to be autonomous. This is a detail that we should all think about.
At the federation and club level, work also continues to ensure that there is a real confrontation. If a conflict arises from time to time, it is discovered, debated, resolved … and so progress is made. 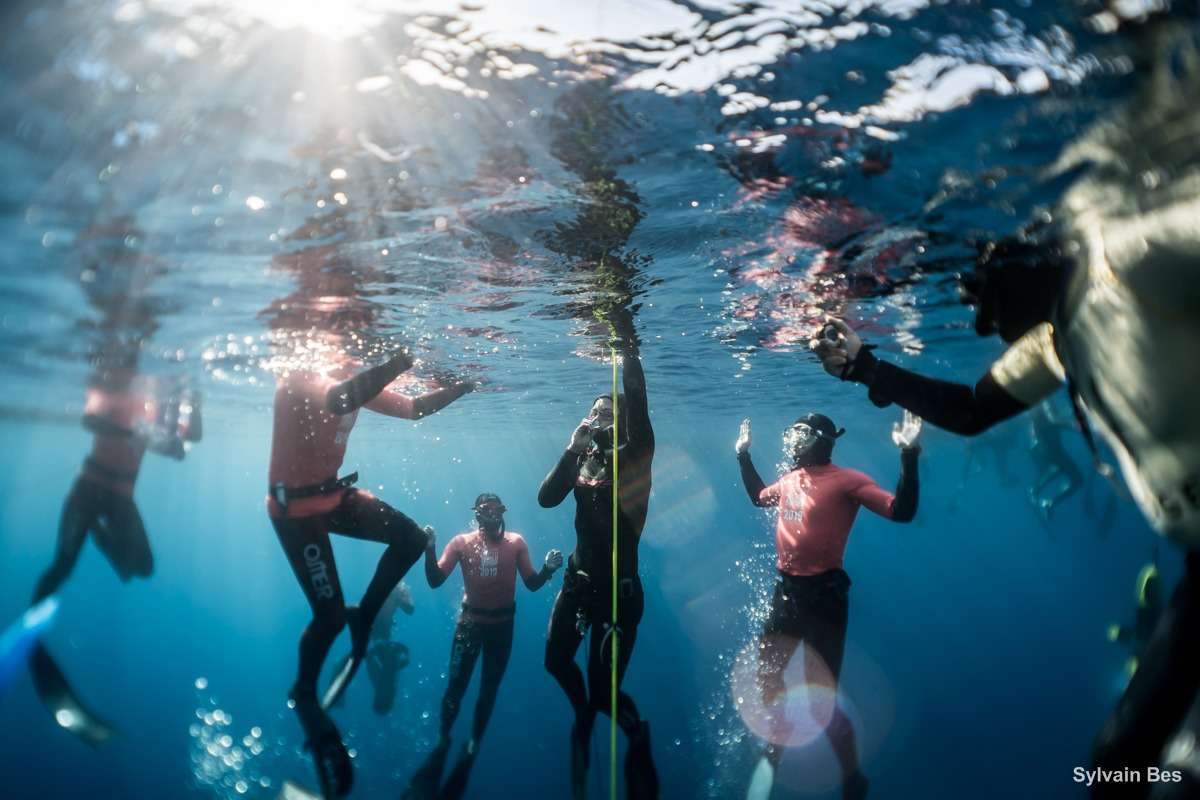 BC. How would you recommend practicing freediving?

IS. Well, it is a sport that can be practiced both in the sea and in the pool and that can also be used as complementary training, since it is very advantageous under various aspects: it is an economical formula for doing training at altitude to produce red blood cells; according to various studies, it serves to create more and more efficient muscle fibers, it also serves as rehabilitation for various injuries without having to do sports and impact exercises, … it has many applications.
Personally, I like to practice it more at sea but I am aware that not everyone, both for the place of residence and for the question of resources, can practice it in the sea, so the swimming pool is a good option.
In any case, I recommend that people starting out do so under the supervision of a person with a recognized and reputable degree or through courses, especially in the beginning and for safety reasons.

BC. And would you recommend participating in the championships?
IS. Totally. I try to encourage people to compete because for me it is like a party, it is a celebration of our sport and it is thanks to competition that we make this sport visible. To those who think they do not have the level sufficient to compete, I tell them that it depends on the pressure that everyone wants to put, there will be those who compete to win but others do it to have fun and spend a pleasant day with friends who share an experience.