Apnea Passion Magazine
Advertisement
News & Advices Experts & Champions Francisco Loffredi
Advertisement
Looking more and more accorss European borders, we have gone all the way to Brazil and had a chat with a very strong international athlete, the Brazilian Francisco Loffredi, surely known for the amazing “big size” catches, and indeed a great person for his sympathy and affability, and huge passion for spearfishing, to the point he left his suit and tie for this passion!
Francisco Loffredi is a comercial spearfisherman and journalist from Rio de Janeiro. He also has a degree in Management, but gave up his suit and tie job in 2000 to dedicate his life to his passions: spearfishing and the ocean. He is a certified Scuba Instructor since 1990 and an official International CMAS Referee.
As a competitor, Francisco has excelled as a big-fish spearer, collecting Big Fish Trophies in spearfishing competitions in Brazil and across the globe. In 2013 he became the only competitor to ever win the three trophies of the Blue Water World Cup in the same year, Individual, Team and Biggest Fish (winning it again in 2015). Member of Brazil’s National Spearfishing Team in continental and world championships, in 2015 he was made captain of the team, debuting with a victory at the 2015 Pan-American Championship in Acapulco, Brazil’s first overseas victory in 40 years. In 2018 he finished second in the Kuwait National Championship and won the Big Fish Trophy at the CMAS World Cup of Clubs in Tunisia. Francisco currently holds 3 Spearfishing World Records. 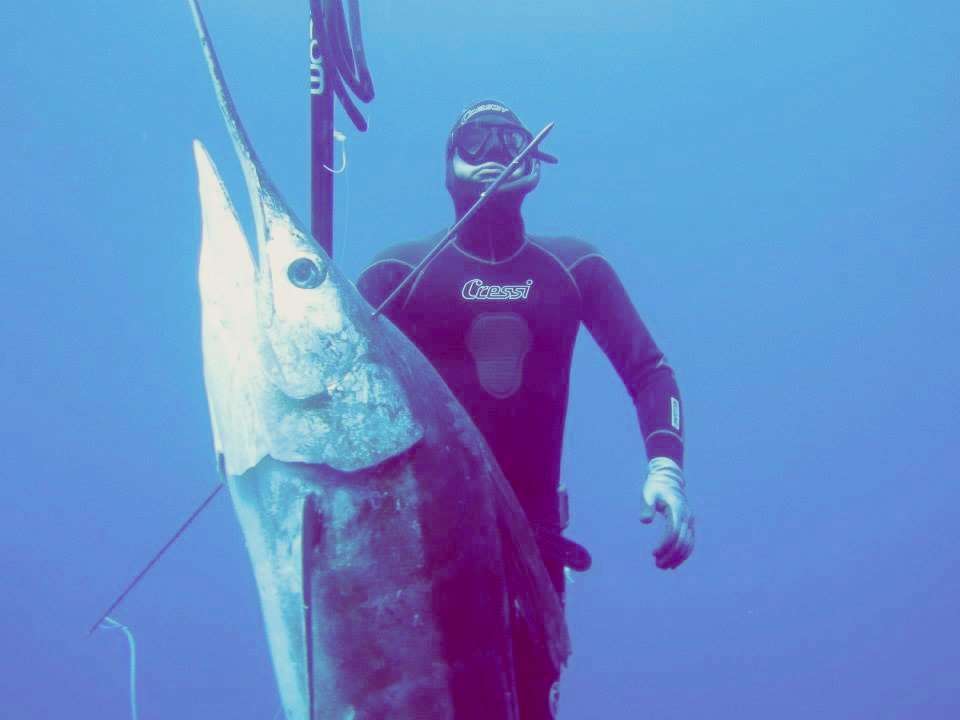 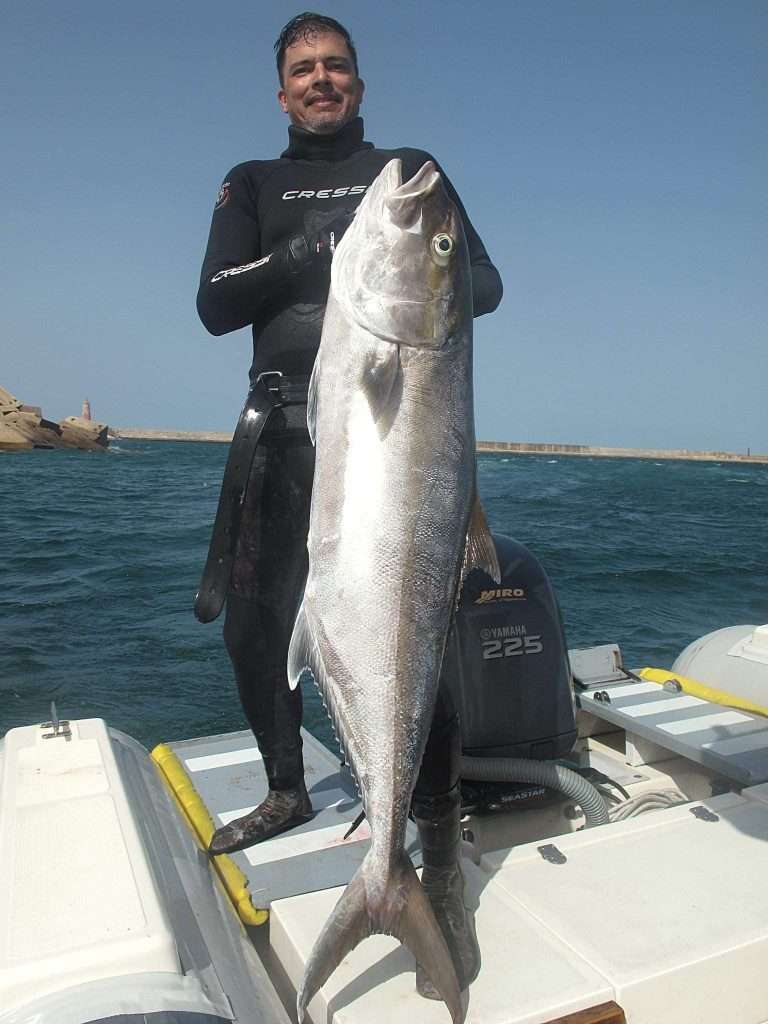 As of 2019 he is the captain of the USA National Spearfishing team, the first foreigner to ever to hold this position.
Francisco received from the Brazilian government the Sport Honor Merit Award, the highest decoration of Brazil’s amateur sport in 2013.  He is the Spearfishing Ambassador for Cressi Sub, one of the biggest and most traditional brands in the industry. Besides Cressi (Italy), he is also sponsored by Osklen(Brazil), BR Marinas (Brazil), BYS (USA) and Paralenz (Denmark). Osklen’s iconic OCEANS summer collection was inspired in Francisco’s urban aquatic lifestyle, to date, the top selling collection of the brand.
By mixing fishing with cooking, Francisco was able to bring spearfishing to the attention of the general public. Owner of Rio’s leading fish shop and having his own talk/cooking TV show, he has become the local reference in matters of seafood and fishing.
Though not a chef, Francisco’s seafood cooking skill has earned him the reputation as an authority in ocean culinary. He won the prestigious Master Lobster Chef Cook Off in 2019. He has seafood dishes named after him in multiple restaurants across the globe, like “Loffredi’s Polenta di Testa” served at Manhattan’s trendy The Fat Radish or “Peixe do Loffredi” at Guimas, Rio de Janeiro’s most traditional Bistros. 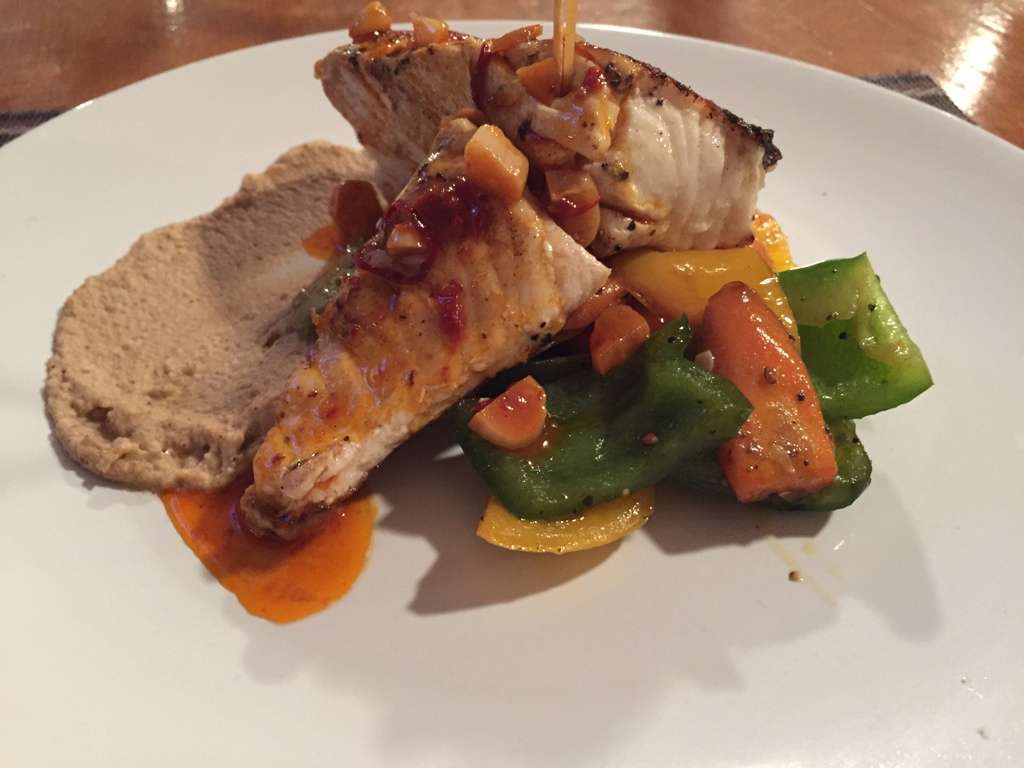 Francisco wrote the initial proposal for MoNa Cagarras, Rio’s marine park and serves as a member of the board. He is responsible for pushing stricter rules for local spearfishing competition, raising minimum weight’s and quotas.
Francisco’s diving skill are also at service in the film industry. He has credits as Stunt Diver and Water Producer in multiple Brazilian and Hollywood feature films, countless commercials and music videos. More details of his on screen career at Francisco’s IMDB page.
Francisco Loffredi is evidently an amazing and multifaceted athlete and person, but we wanted to know more, of course, about his spearfishing capacities, techniques, experiences and passion.
ApneaPassion: Francisco, you have a huge experience and are a Cressi Team athlete. Which are your preferred spearfishing techniques?
Francisco Loffredi: I like to hunt groupers in holes. It’s what I did for a living in Rio and is still my favorite. Last 10 years or so I have been more involved in hunting pelagic fish in blue water, which can be fun and very rewarding. But I can also say that my favorite hunting is the one done in a new place with new species. Nothing beats the challenge of the discovery. Shooting and eating a new fish is magical! 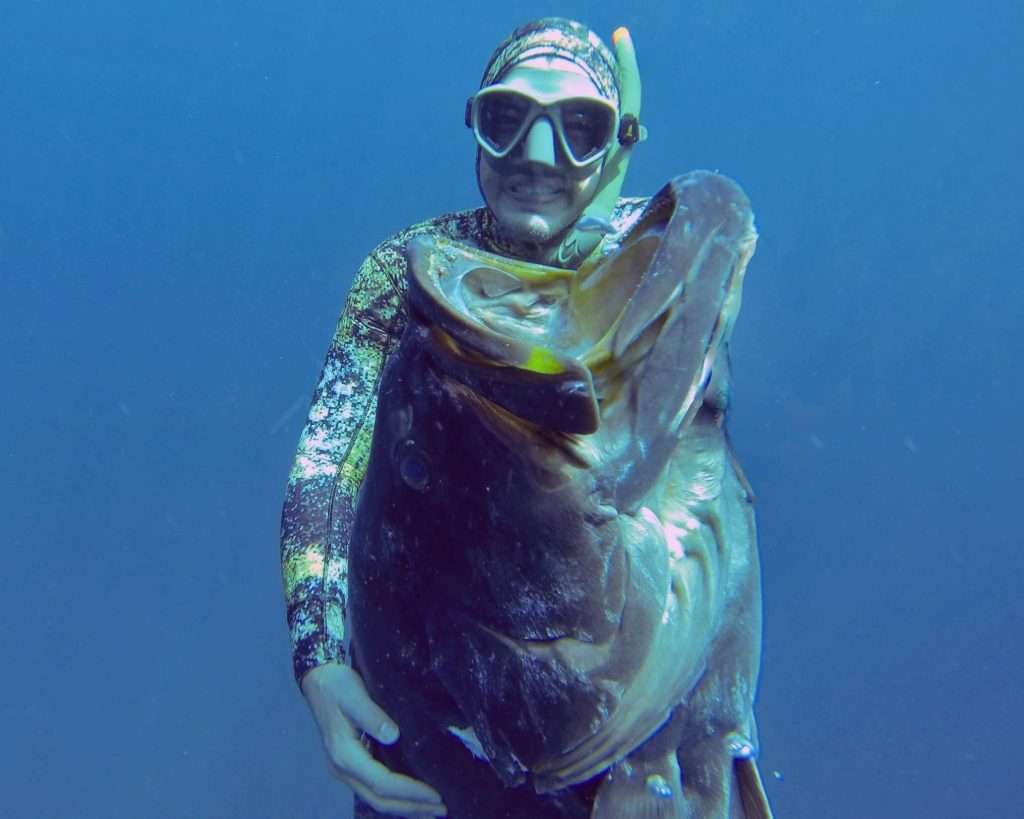 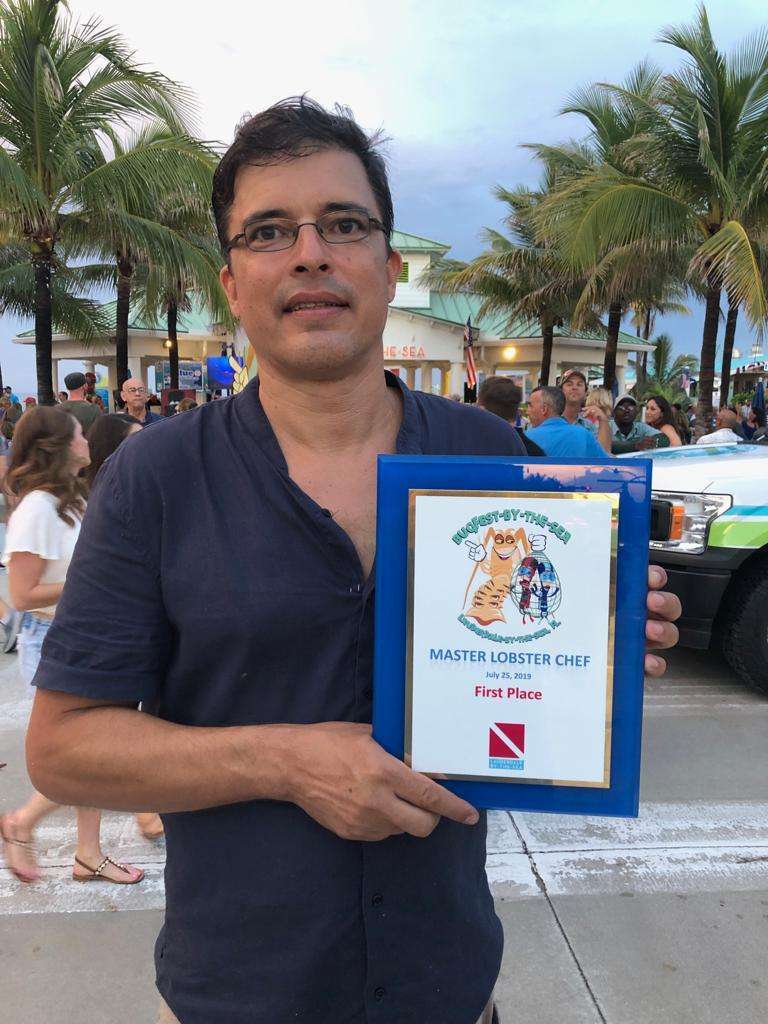 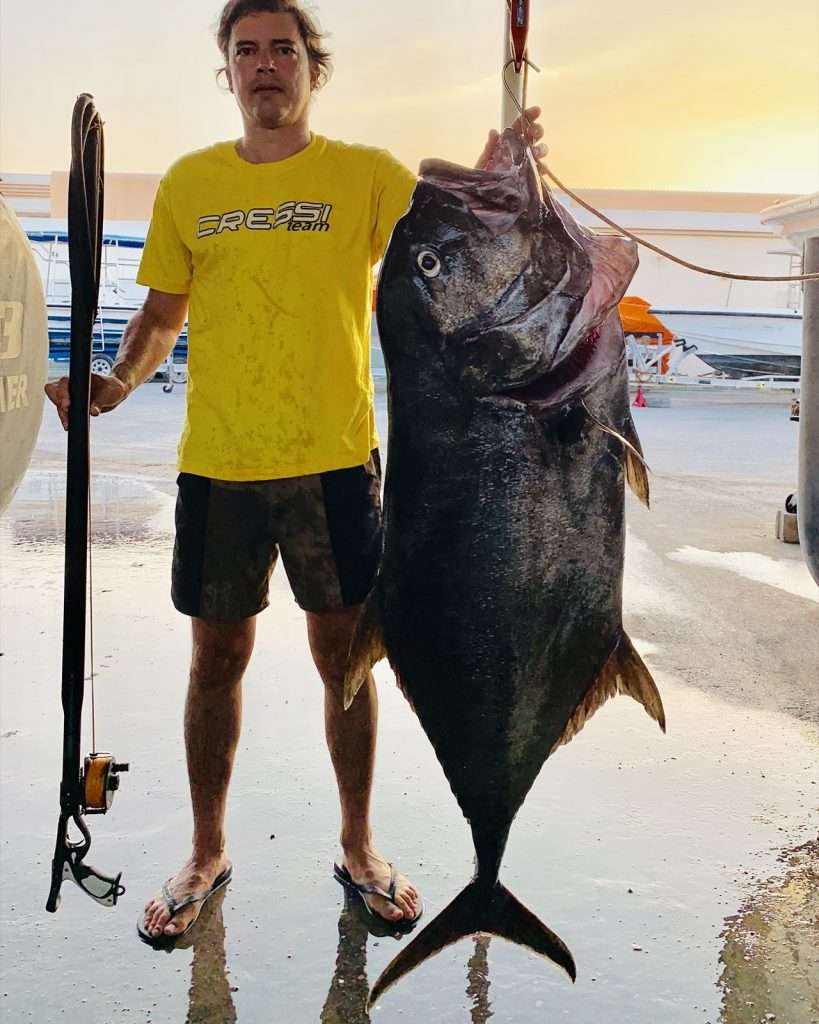 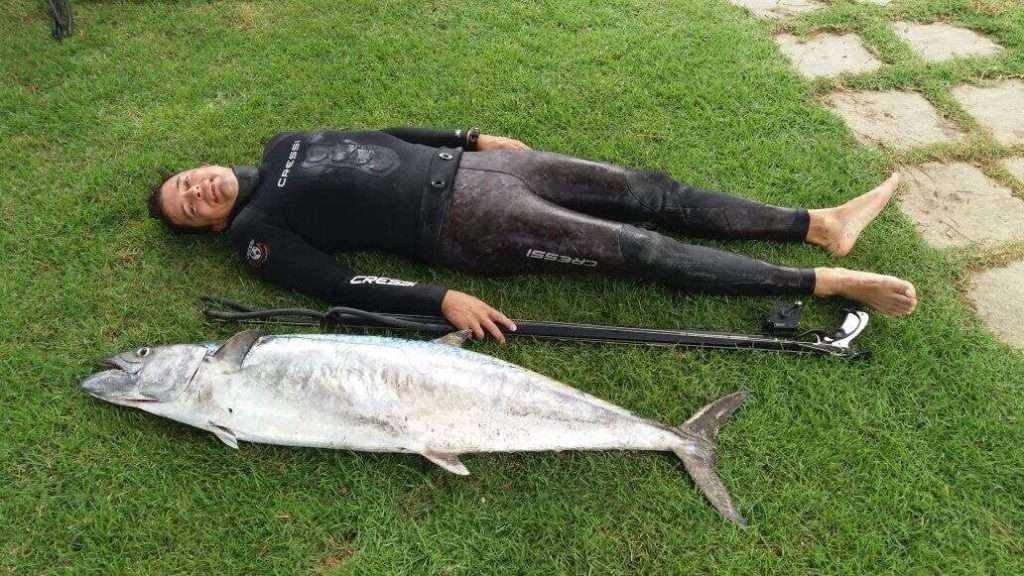 AP: You have won many competitions, which are the ones you remember as more exciting and important and why?FL: I have way more Biggest Fish trophies than 1° place and I am happy with this as I have always been interested in big fish :). Winning a trophy in an international competition is the greatest challenge for a competitor. To go to a new place, learn its secrets and succeed competing against the locals is very difficult, so for sure my favorite awards are the ones concurred overseas. I am lucky to have brought home awards from spearfishing competitions in Africa, Mexico, USA, Middle East and the Mediterranean.
Among the most exiting and importan two competitions come to my mind:
2013 Blue Water World Cup, where I won 1º Individual, 1º Team and Biggest Fish with a beautiful Marlin. Being it a blue water completion, I was out of my comport zone, competing in a modality that is very different from my everyday one.
2018 CMAS World Cup of Clubs, where I won the Biggest Fish Trophy. This was very important to me because spearfishing in the Mediterranean is the greatest challenge for a non Mediterranean diver, as historically spear fishermen from the sea are almost unbeatable in their home waters. This competition was even more challenging since there where over 10 world championship titles “in the water” as legends like Mazzarri, Molteni, Riolo and Delbene where competing alongside current champions Vasiliou, Maccioni and Astorga. This is probably the hardest won trophy on my wall!!!
AP: You are an amazing expert of big fish hunting, which fish do you prefer to hunt and which are their specific characteristics/difficulties in the catch?
FL: I like to spear and eat big groupers and strong pelagics. Despite being very different in behaviour and technique, there is a skill that is unique to all big fish hunting: landing a very good shot! Always take your time and never try “miracle” shots on a big fish. Both while hunting big bottom fish or heavy pelagics, most people get over excited and precipitate their shot and so many times ruining a once in a lifetime opportunity. I have learned a long time ago to only pull the trigger on a big fish when I am certain I can land a shot that will bring him home to your oven. If I’m not absolutely sure, I’ll wait for a better opportunity as many time the fish will give you a second chance if you play it cool.
AP: One would think that to catch a “huge” fish you need a “huge” speargun, for example very long and heavy wooden spearguns with a great number of bands, as often used in the US, but your technique is different. Can you describe it both on the equipment side and the technical spearfishing action?FL: As I wrote on a Instagram post some time ago…  “To shoot big fish one needs big ambitions and an agile, precise gun”. I see now a days a lot of people swimming around with underwater bazookas and most of the times the result is sloppy spearfishing; belly shots and lots of fish being harmed and not landed.
I believe that shot placement is the most important factor in successfully landing of a big fish. For the spear to hit the fish exactly where I want I need and agile and precise gun (I personally use a Cressi Cherokee Ocean 120 with double 14 mm diameter rubber bands and a 7 mm diameter shaft) that I can manoeuvre easily in the water and hit my target where I want. Big wooden guns are very powerful and sometimes precise, but are not easy to manoeuvre and make approaching the fish and aiming more difficult. Big guns usually result in shots taken from too far away and hitting the middle of the fish, not the ideal when hunting big fish. 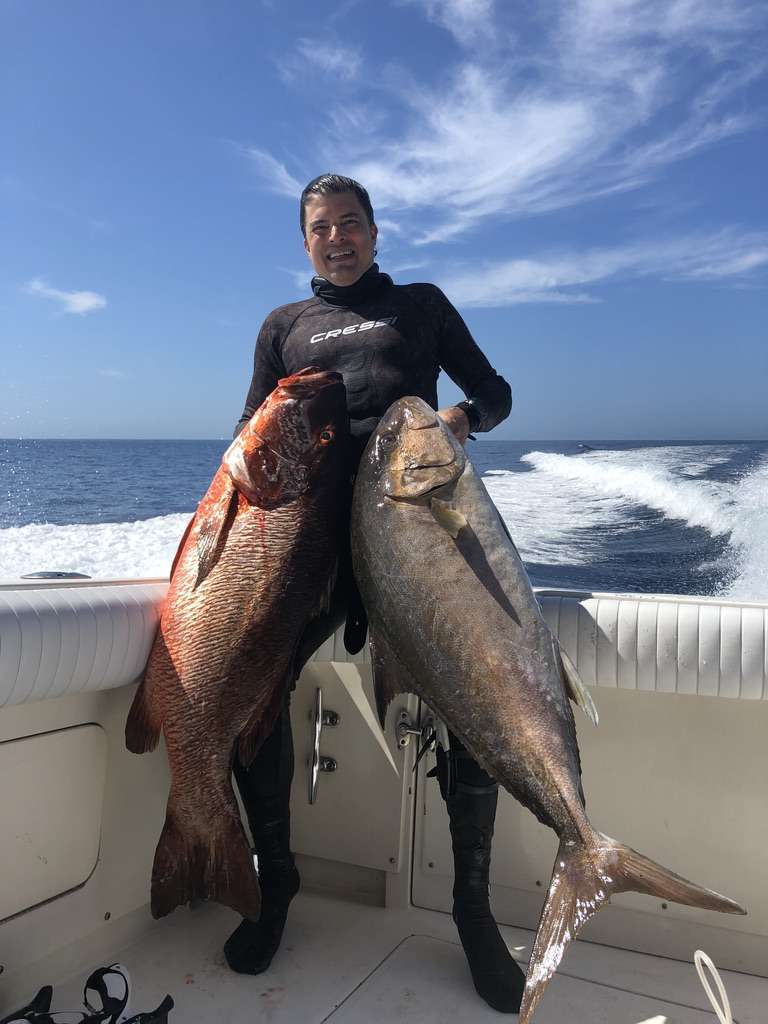 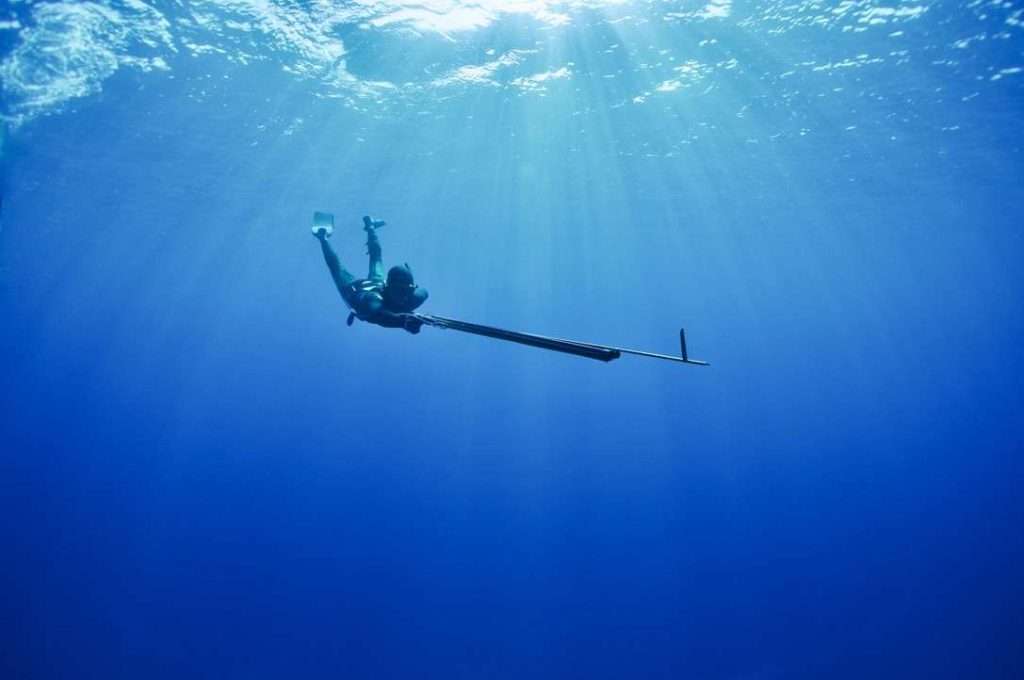 I am sure lots of people will disagree with me, it’s a matter of opinion. But look at the Blue Water World Cup, the spearfishing tournament in the world with the biggest fish. I have competed in it four times, in three of them I shot the biggest fish. Always with a normal rail spearguns while the majority of my opponents competed with big wooden blue water spearguns. There must be some truth to what I am saying :).
AP: Referring to the previous question, can you describe how you applied your specific technique to one of your big catches?
FL: In the 2013 Blue Water World Cup I won the biggest fish trophy with a 80+ kilo Marlin.  I could have shot the fish before, but instead I took my time, let the marlin pass by me so I could shoot it in the head, but from behind. This is much better for two reasons;
1.  Fish heads have a strong skull in front of head, but much softer from the back, easier to penetrate, so with a lighter gun I need to shoot the back of the head if I want penetration.
2.  A perpendicular shoot on a strong pelagic fish has much more chance of breaking the spear or ripping the fish than if the spear hits the fish in a smaller angle, as the spear will stay closer to the body of the fish and make less resistance against the water when the fish swims away, reducing the chance of spear breaking or taring off.
AP: Arbatax must have been a great but hard experience. What can you say now and what have you learned from what has surely not been for you and the team the result you wanted to reach?
FL: Team USA made two expensive mistakes in Arbatax. The first was to scout competition area all our days in Sardegna and not have a single day shooting fish outside the zone. Second, we did not identify beforehand that the scorfano-scorpionfish would be the winning and decisive fish of the tournament.

Despite our bad performance, Arbatax was an incredible experience, especially to witness “history in the making” as I believe De Mola took the sport to another level with his two gun dive technique. Surely the best man won!

Regarding the depth controversy, I see these super deep competitions as part of the sport’s evolution and I have no problem with it, despite being very unfavorable for me as an athlete and captain. Every competition in the Mediterranean will be like this from now on. As world championships are held in different countries, divers skilled in other conditions like poor visibility, rough sea or cold waters will have a chance to show their skill too. The only thing I would change in Arbatax is that I think it’s necessary for all world championships to have shallow spots in competition zone.

Organization was fantastic and I would like to take opportunity to complement Simone Mingoia and his team for the hard work and successful event. One thing though made me upset in Sardegna was to see the official hotel serving baby groupers for dinner in multiple nights. While this baby grouper massacre is done commercially, sport fishermen can’t catch a dusky grouper during competition?!?! Makes no sense to me 🙁