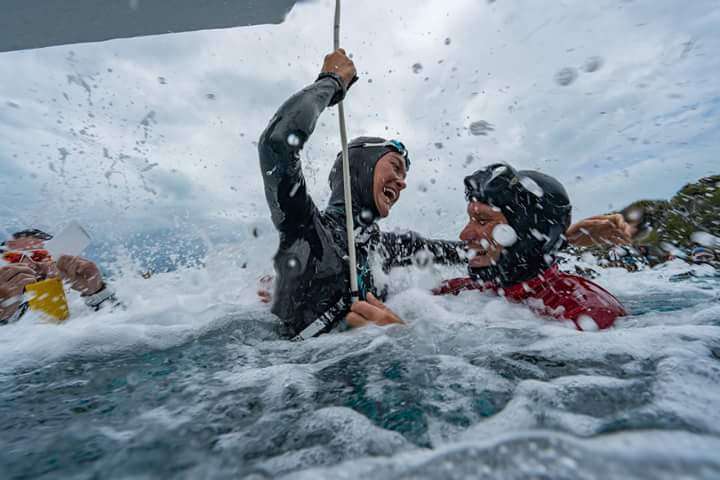 The Italian Champion from Rome at her third attempt has managed to express all her potential and talent: it is Absolute World Record in constant weight with monofin. ” A dream that I have wanted to achieve since two years!”

We have interviewed her after the World Record in constant weight with monofin, and Alessia has emotioned us also with her words. The Italian Champion has told us about her dreams, sensations, difficulties encountered, and the truth about the unsuccessful attempts… and this is not all!!!

AP: Which have been the difficulties that you did not expect at the Vertical Blue and that have made complex the first attempts to conquer the World Record?

AZ: Certainly I had a lot of pressure on me, many expectations, that I have actually also created myself. I have wanted to try the free immersion (FIM) on the first day, underestimating a little bit the challenge, also due to the fact that trials had been extremely positive. All the mistakes made have been my own mistakes, either technical or due to distraction. I should have delt with them better. Maybe I had made them also in the past, but at smaller depths I had had no real problems. Here, at the Vertical Blue, trying World Records, all had to be done in a perfect way, but this has not happened at first.

AP: Exactly which have been the mistakes you have made in the first attempts?

AZ: In the first day, when I have tried the -93 meters free immersion, I had not eaten much and have started the dive feeling already cold. Moreover, I have taken too much time to dive and come back up, precisely 4’05”, an eternity. I have had an extremely strong narcosys, already coming up back from the bottom. I have actually made all my way back up, including the Black Out, not really conscious, as in a dream, a nice dream by the way, as I had taken my first badge of the Vertical Blue, and I felt happy, so the ascent has been happy (she says that laughing in her special way), but unfortunately that’s how it has gone. I have not wanted to try again the FIM as my real objective was the Absolute World Record in the monofin. Anyway, I will try the World Record FIM in the future, as my objective is to become the second woman in the World, after the Molchanova, to conquer all the Absolute World Records.

In the second dive, the first attempt of the monofin at – 102m, the problem has been with goggles. I used, with my previous goggles, to let them a little bit loose, as I thought I could see better. Actually, already in the -94 m FIM attempt the goggles had moved, but I had not given such happening too much importance. In the – 102 meters attempt the goggles have moved at – 75 meters, so I had to reposition them, and again at – 35 meters, when I have met Marco Cosentino. The goggles have come off and I had to reposition them once more, loosing setup, hydrodinamicity and time, and at the end I have lost hope. I could not see anymore, I had the line behing me, the staff has pushed me and I have been disqualified.

At the second attempt for the -102 meters I have once more lost the line. I had it in my hands, but in the last 5 meters I lost it. I have looked at the video and I have seen that I did not manage to grab the line again for just 5 cm. I have layed back to grab it again, I have tried to swim, but when I managed to grab the line again it was too late, and I have done the protocol in 15″50 instead of within 15″.

AP: What, to the contrary, have you learned and done in a different way in the successful attempt of the – 102 meters constant weight monofin?

AZ: In occasion of the World Record I have done everything in a perfect way. I had understood how to correctly tighten the goggles, how to fin correctly, especially after the turn from the bottom, and I had understood what to eat. So, finally, I have understood and learned many things that had instead stopped me in the previous days. In particular, I had understood how to grab the line without loosing it. So at – 20 meters I have grabbed the line and made it slide through my fingers and without loosing it. At that point all has been easy, as I had plenty of air and I have done the protocol perfectly.

AP: What do you feel by conquering an Absolute World Record?

AZ: This is the second Absolute World Record that I have conquered (the first was in the Indoor DYN with monofin, with 250 meters in long pool – Ndr), but it is also the one I wanted more and the most difficult. The 250 meters in the pool have been a Record that I have looked for and wanted, but the – 102 meters are really my dream. It was since two years that I wanted to achieve such Record, with the fear that someone could achieve it before me. To be the first woman, after 6 years, to beat the amazing Natalia, is really a dream!

AP: Which are the differences between the Vertical Blue and the CMAS competitions, where you had already obtained many World Records? What do you feel is better and what worse between vertical Blue and CMAS?

AZ: It must be said that at the Vertical Blue you can meet the strongest athletes in the world. Here the atmosphere is amazing, as everyone is here! You find Willian (Trubridge), Molchanov (Alexey), Miguel (Lozano), and more. There are the Japanese athletes that are so strong, and there is Kate Middlelton. Surely some athletes of the CMAS are missing, but I sincerely think that here the situation is more “advanced” compared to “ours”, in particular in the men category, while in the women there are more strong athletes. Other differences are minor, such as the start protocol, differences that I have suffered a little bit the first two days, but that I have learned to deal with the following days.

AP: How did you feel exiting the water and conquering the World Record? Do you feel you still have more to give, or have you reached your limits?

AZ: When I got hold of the line and have made it pass through my fingers, in front of me I had Steve, the assistant, and in that right moment I have understood all would have gone perfectly. I have started the protocol, then I have wanted to pull myself up in a sense of liberation. It was all that I wanted. I could have reached such result at the first attempt, but I made too many mistakes. I know I have more to give!

AP: Which are your next objectives and, hopefully, World Records?

AZ: My next objective is to bring home this World Record (the interview has been done before the end of the Vertical Blue – Ndr), since competition is not finished yet. After, I have the European Indoor Championships in Italy, where I will surely be calmer, even though much attention will still be on me. Anyway, after this competition, which has been really tough, I think situation at the Indoor Champs will be more comfortable, with only three races, and where I will do all I can to swim well. Now I will take a week rest to reload batteries, since it has really been a difficult week, and has not yet ended.

AP: A comment on the Vertical Blue and Dean’s Blue Hole.

AZ: It has been my first participation to the Vertical Blue, and it really is a fantastic competition, organized in an impeccable way by William Trubridge. Dean’s Blue Hole is a surreal place. I had some fear of the dark in the hole before coming here, but instead it is like being sucked by this blu that slowly becomes black, darker and darker. I think I will come back with pleasure.