Stjepko Kesic (Strozanac Podstrana) won the title of Croatian spearfishing champion for the third time in a row. Kesic, during the two-days event held in the waters of the island of Murter and Zirje, was first both days and with 200% points he won the Title.

Second in the competition of 23 athletes was Sandi Imbrisic (Marlera Liznjan) with 165,11% points. Imbrisic was second behind Kesic on both days. Third place went to Bruno Zic (DSNM Volosko) with 130,10% points. Zic was third on the first day, while he was fourth on the second day, but even that was enough for him to win the first national medal.

“It was really hard, exhausting, very bad conditions. The visibility was maybe 10 meters. I fished between 30 and 38 meters. It was also difficult to prepare the zones. The first day I didn’t have a lot of good marks, I found more fish in just two, three good spots. At the start, 8 fish, three forkbeard and five white seabreams, a gilthead seabream, a conger and a moray eel”, said Kesic.

Sandi Imbrisic (Marlera Liznjan) also caught ten forkbeards on the first day and earned a bonus as well as Kesic, and in addition, he had a red scorpionfish, a white seabream and a brown wrasse on the wire, which brought him 20647 weight points. Sandi Imbrisic, together with his teammate Sandi Perusko, which was at the end of the competition fifth, did 15 days of preparation in areas of the competition.

“It quickly became clear that there were no fish in the shallows or there were very few. I fished from 32 to 39 meters because there was no other choice if you wanted a result. On these depths, I searched for forkbeards, white seabreams, brown wrasses, red scorpionfish which were few to see but also there was a full moon that affected the conditions. The red scorpionfish were along the rocky wall, and these conditions made it difficult to find them because they changed positions. There were no congers at all, a few moray eels, but they were not in a fixed place, so it was a coincidence to catch them. Grouper I’ve seen one, at Zirje and went later to check it but I did not see it, so on competition I didn’t want to waste time. The forkbeards and the bonus for ten pieces were more important to me”, said Sandi Imbrisic. On the first day, Bruno Zic brought six white seabreams and four forkbeards for weighing, which brought him 148437 weight points.

Antonio Buratovic (Periska Ploce) had only 98 points less in fourth place, while Sandi Perusko had 13530 in 5th place.

“I didn’t spend a lot of time on preparation, two days in each zone, plus one day of scanning. We found a lot of fish, but others also found some in the same spots. But in the end, I am very satisfied”, commented Zic.

On the first day all the athletes together caught 116 fish, for a total weight of 108 kg. Forkbeards were caught the most, 55 pieces and 27 white seabreams, while the heaviest fish was a conger of 5581 grams.

On the second day of the competition, Stjepko Kesic has caught a white grouper of 5230 grams, six white seabreams, two forkbeards and brown wrasse of 19835 points by weight.

“The other day I had two groupers, one I found, but the other I did not. I had to dive 15 times to find it because the cut in the rock was long 15 – 20 meters. I hit the grouper right away, but I couldn’t get her out. I stood outside for an hour and couldn’t do anything, so my nerves were under pressure. I went to catch other fish, and then came back when all calmed down, hit her on the other side and pulled out”, said the Champion.

“The second day was more white seabreams, but thermocline moved deeper, so that huge masses of white seabreams that we found on preparations moved away”, commented Imbrisic.

The third spearo of the day two was Vice Belamaric (Pirka Tribunj), who was overloaded for the first hour and a half on the first day and had to take a break. On the second day, he did not repeat the same mistake and made bigger breaks and brought a full wire with a white grouper of 4476 grams, four white seabreams, a forkbeard and a brown wrasse giving in total 15495 points.

“I did a good job on the competition, but the second day I did better tactically. We went back to some places that we thought might hold the fish and so it was. The fish were not in the shallows at all, so I fished from 29 to 39 meters. The zones were large with a lot of all kinds of terrain, but in those zones, there is also all kinds of fishermen, so the fish is nervous and has retreated deeply, so days can pass without finding a good spot where fish is present. But I had a good boatman, Josip Stokov, who knows the zones and I thank him for his help, because without him this would not have been possible. Thanks also to my club for support”, concluded Bruno Zic.

Sandi Imbrisic was satisfied with the title of Croatian vice-champion.

“It couldn’t be better. I expected to be among the top five because I had a lot of marked fish, but it is a very big difference between expectations and what you can do in the competition. Here are big depths, preparation was up to 40 meters. On Zirje I made the first dive to 36 meters, so it was not an easy competition at all. In Murter, I had a wall with brown wrasses and red scorpionfish at 29 meters, and the next spot was at 37 meters. It was very deep, beyond what I planned, but it was either so or not at all”, said Imbrisic whose boatman was Ivan Kosuta.

On the second day of the competition, 89 kilograms of fish were caught. It was 92 pieces in total, the most were white seabreams, 34, and 24 forkbeards, while the heaviest was a white grouper of 5230 grams.

Three times in a row

“I don’t know if I want up to five titles in a row, because I don’t like to do preparations. To ban the preparation would be great. I went eight days on preparations, but not the whole days because there were such poor conditions. Also, I didn’t want to be in the zones each day, the whole day and for 15 days in a row. I prefer more to have good 2-3 spots than 50, because then you do not know where you will go first or if someone has already been in the spot or not. Congratulations to Zic and also Sandi, Imbrisic and Perusko, as they showed how good they are and that they know how to fish. I would like to thank my longtime boatman Mario Bakotic – Zile, my family, my wife Joska, sponsors Cressi and Nino Piras, Garmin Croatia, the club Strozanac Podstrana, to Jakov Grubic and to three former competitors and my friends Danijel Pizentic, Mate Baresic and Daniel Gospic on the generous assistance during preparations”, concluded Kesić. 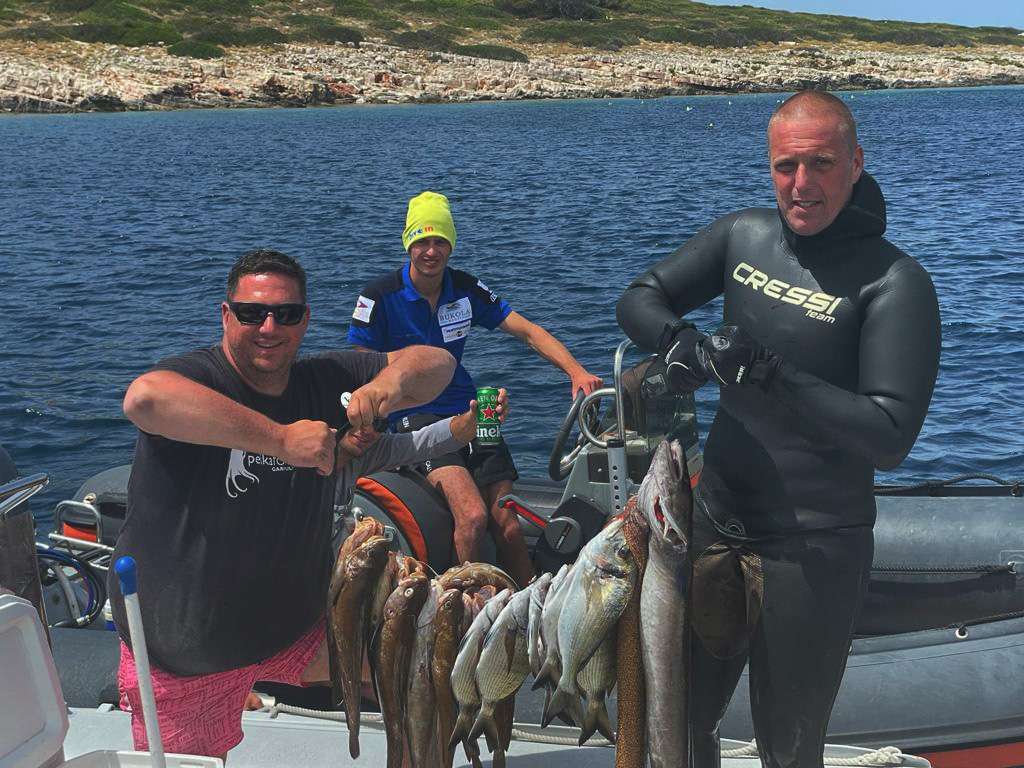