Semana Master Ciutat de Palma 2021 has been cancelled due to COVID-19 pandemy, and communicated by a letter of the Federaciò Balear d’Activitats subacuàtiques. If we talk about Semana Master Ciutat de Palma, the idea of ​​the fraternal competition par excellence automatically comes to mind. It is undoubtedly the spearfishing event with the greatest international impact that is held every year in Mallorca, but what exactly is it?

How it was born

The first “Master Ciutat de Palma” trophy took place in 2002 and not even the President of the Balearic Federation of Underwater Activities and the ideologist of this trophy, Juan Más, could foresee the repercussion at all levels that this championship would have had in time.

Although over time the format has evolved, the main idea has always remained to bring together the best spearfishers in the world in each edition. It began as an individual trophy framed in the patron saint festivities of the city of Palma, but as the participation and interest of the different international federations increased, the trophy for nations was born, which has subsequently evolved to the current “CMAS World Cup“.

At the same time, the day before, the “Open Ciutat de Palma” was also being held, an individual event that scored for the Mallorca championship, which from 2012, as a tribute and in memory of Sebastián Carbonell, became an open event for teams.

This new format was very well received, with the fishermen participating in the Master or in the C.M.A.S. World Cup, forming teams and even joining other teams together with local spearos. The reality has exceeded the best expectations of the organization, gathering in each edition around 40 teams of three members in a single day.

Everything evolves and, in the same way, the repercussion of these competitions. Commercial brands have also been encouraged to participate as a team, creating the “C.M.A.S. Brands Cup”, which currently generates a lot of expectation.

In the last two editions, the C.M.A.S. Women’s Cup has been held, which is having a very good reception and is awakening the interest of women athletes in the competition.

In just three days the Master, C.M.A.S. Women’s Cup, C.M.A.S. World Cup, C.M.A.S. Brands Cup and the Open de Palma Memorial Sebastià Carbonell are held, which is now known as Semana Master. All this framed in the beautiful waters of the island of Mallorca, more specifically in Palma, its capital. The last of the acts of the Semana Master is a great closing dinner and delivery of trophies, gifts, raffles, … bringing together more than 200 diners, who share the same passion for underwater fishing. There are three days in which the organizers go out to get everything ready, but we know that everything begins to take shape much earlier and that there is a lot of work behind it.

Joan Mas (President of the FBDAS)
“I only have words of thanks the people who make Semana Master Ciutat de Palma a reality year after year. I greatly appreciate the effort of all the athletes, federations and brands that attend the event as well as the great team work of the FBDAS, volunteers, collaborating companies, institutions, … It is a pleasure to be able to gather every year all these people who keep spearfishing going.” 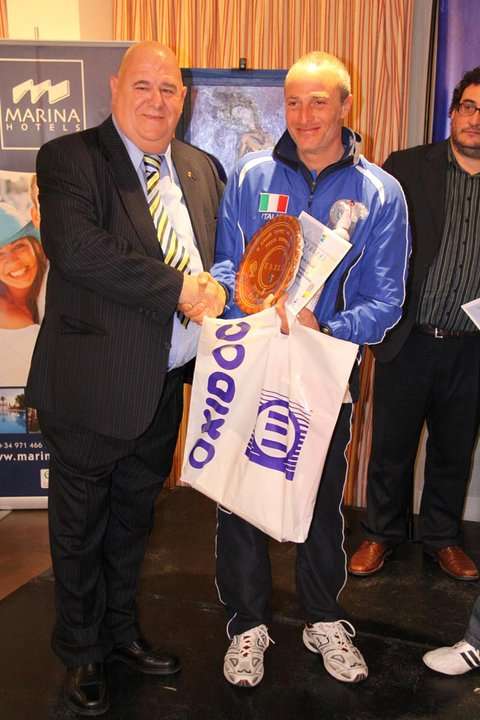 Daniel Gospic
“Master? … the most important event of the year for elite spearos. Meeting place of the best friends and great athletes.”

Oscar Cervantes
“The Master of Palma, the best meeting of the world elite of this wonderful sport.”

“What I like is the atmosphere of a spearfishing festival, among many friends and lovers of the sea and spearfishing. The various weekend competitions make it a unique event of its kind. Mallorca is the cradle of spearfishing, and participating in this context is an exciting experience. I feel I can say that anyone who has attended at least one Semana Master event is privileged.”

“It’s the mecca of spearfishing! Anyone who loves this sport would have to live this atmosphere of friendship and competition.”

“For me Semana Master is one of the most exciting tournaments of the year without the anxiety of the need to achieve some kind of distinction. We have been able to participate as part of the Greek national team, or a very strong commercial brand team or even a team of friends to participate in the Open … And along with that, now you have two or three days holidays in which all fans can participate and join the action. I love that! Young and old, men and women in the water competing and celebrating without fear of embarrassment if things don’t go as planned. Any winner in the “Master” tournament must be considered a world class spearo.”