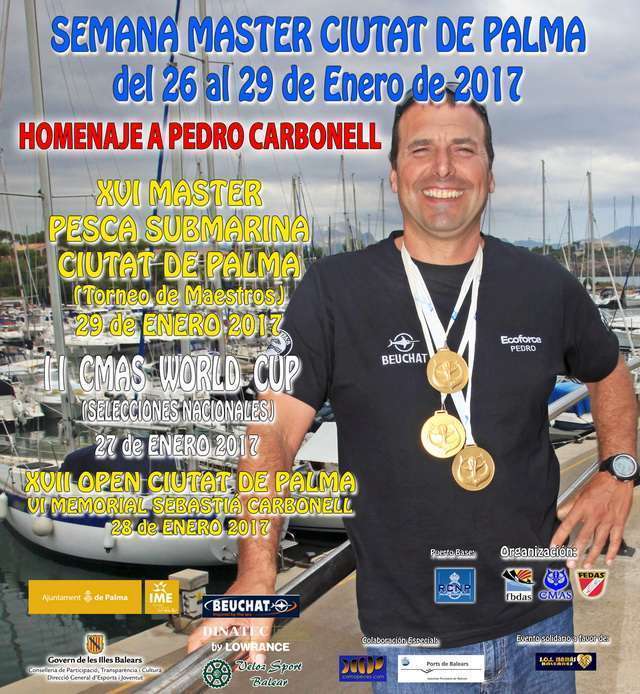 From the 26th till the 29th of January Palma de Mallorca will be host of the traditional competition in spearfishing named „Semana Master“, organized by the Federation of Baleares.

Competition in Palma started 16 years ago. The event has been international since the beginning with Master and Open competitions, but eight years ago the Federation of Baleares included the Cup of Nations.

„Semana Master“ through the years has grown to a very important competition not only for Spain, but also for Europe and North Africa. Almost every nation that participates in the Euro-African Championship was at least once in January at Palma de Mallorca. It is a good opportunity to compete with the best european spearos and to visit legend Jose Amengual in his shop. When Pedro Carbonell stopped with competition, Semana Master became the only event where it is still possible to see Carbonell and compete against him.

Last year „Semana Master“ was positive for rookies. CMAS Team, that consists in spearos from three different countries – Giacomo de Mola from Italy, Kostas Makris from Greece and Oscar Lopez Martin from Spain, on their debut in Cup of Nations almost won the competition against four other teams. CMAS Team was second with 22,720 points and the first was Spain with 24,735. In past years the difference was never so little between the nations, as Spain was always the winner with big gap from the second. Sergio Castillo, David Montero and Jaime Heras caught 22 fish, eight white seabreams, seven brown wrasses, three green wrasses, one black scorpionfish, one salema, one mullet and one moray. The CMAS Team had two dusky groupers, the heaviest of which 2870 grams, a conger of 5560 grams, five forkbeards, three brown meagres and one red scorpionfish. Giacomo de Mola got a special award for his grouper, which was the biggest catch of CMAS World cup.

No one expected it, but they did it again: De Mola, Makris and Lopez Martin as Team Pathos ended up second! Conger, dusky grouper of 7020 grams, five mullets, one salema, two white seabreams and three brown wrasses worth 23,730 points.

The team Blausub, with Sergio Castillo, Miguel Galera and Daniel Galera, ended up third with 17,055 points – one dusky grouper of 6690 grams, a moray, a forkbeard, a brown meagre, a white seabream, two brown wrasses and two green wrasses.

XV Masters gathered eight spearos, three Greeks, Peroulis, Ringas and Sideris, four Spanish, Cervantes, Lopez Cid, De Julian and Heras, and Portugal legend Rui Torres. Veni, Vidi, Vici. An ancient Latin phrase that maybe in the best way describes what the rookie at Palma competitions, Greek spearo Tasis Peroulis, did. He focused on closing cups, so when he came back after five hours, he had four cups and secured 10000 bonus points only for that. Four cups were made of three brown meagres, five white seabreams, five mullets and four brown wrasses plus one green wrasse. On top of it, Peroulis caught a bluefish of 3125 grams. All that brought him to total 34960 points.

Oscar Cervantes did what he can do best, go deep. But even with two big fishes he couldn’t catch Peroulis. Cervantes got one leerfish of 6900 grams, a dusky grouper of 2625 grams, three red scorpionfish, two were 1490 and 1670 grams, a conger, a moray, three brown meagres and two white seabreams. Total point he got were 28860. The other six spearos were far far behind.

This year competition is organised in tribute to Pedro Carbonell Amengual, who was three times World Champion and four times Euro-African Champion.

Opening ceremony, presentation of teams and weighing after every competition will take place at Real Club Nautico de Palma.

„Semana Master“ is composed from three different competitions. First day, 27. January, is reserved for II° CMAS World Cup for Nations, but this year innovation is the participation not only from selection of different countries but also teams of equipment manufacturers.

For Spain Xavi Blanco former World and Euro-African champion will compete, together with Samuel Tomas Ramon, second at WC in Perù 2014 and EuroAfrican Championship in Cadiz 2015, and Santiago Lopez Cid, third at the World Champ in Peru.

From other competitiors there will also be Italian Giacomo de Mola, fifth from last WC on Syros, former World and Euro-African champ Daniel Gospic from Croatiaand many others spearos from Spain and Europe, so competition will be very strong not just first day, then also second and third.

Second competition is XVII Open ciutat de Palma – VI Memorial Sebastia Carbonell, 28 January, where everybody can compete and according to organizers it will be more than 40 teams.

Final competition is XVI Master, 29 January, only for those ones with invitation, former world champ, former Masters winners and first ten from last World Champ. But this year every manufacturer team will get place for one competitor in the Master.

Rules says that fish are separated in four different groups. Minimum weight for group one is 300 grams and for cup points you need to catch five. In this group are for example grey mullet, white seabream, dorado, salema…

Group two consists in fish as dentex, seabass, gilthead seabream, brown meagre with minimum of 500 grams and for cup you need to catch three. In this group is also included the grouper with minimum weight of 2000 grams. Conger and moray are in group three with minimum weight of 3000 grams and cup consists of three. Group four has minimum of 500 grams with three for cup. In this group are flying gurnard and grey triggerfish. Each cup brings more points, one is 1000, two is 3000, three 6000….Penalization is when catch weighs less then 70% of minimum weight.