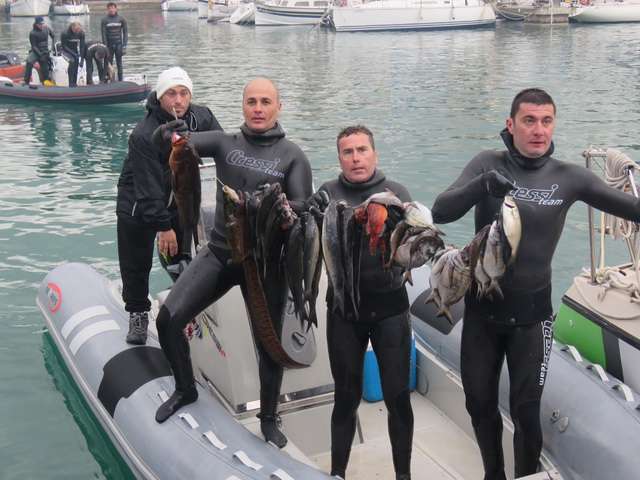 The important International Competition in Palma de Mallorca ends with successes of Beuchat, with Oscar Cervantes, Cressi Team and good results by Pathos.

Every January the Federation Baleares organizes three different competitions named Semana Master Palma de Mallorca. This year they were organized in honor of Pedro Carbonell, three time world champ, four time euroafrican champ and eight time spanish champ. The first day was reserved for national teams, the second day teams with no limits could compete, and the third the competition was dedicated to the spearos with invitation. This year’s innovation was competition of brands, the CMAS World Cup for Brands. Here, eight brand teams were competing together with three nations. This has been the last time as next year only the World Cup for Brands will be disputed. The legend of spearfishing Jose Pep Amengual was present at the weighing phase at Real Club Nautico every day. He was truly surprised when he met again his skipper from first World cup that he won 1973. Walter Faixo came only to see Amengual once again after 44 years. Meeting was very emotional and tears came not just on their eyes.

“We didn’t know the zone and we didn’t prepare the competition in advance. So, without any spots we decided to go in shallow water. We struggled a lot because there were few fish, but in the end we did well”, said Santiago Lopez after competition.

Equipment used by the Spanish Team:

“We did as we agreed. First we moved on shallow water to catch some grey mullets and after spot by spot from two to 20 meters. Visibility was more, less good. Hidalgo catch grouper. From the beginning until the end we cautch fish, we didn’t stop for a moment”, said Daniel Gospic.

Team Licoretas, Samuel Tomas, Raul Astorga and Oscar Cervantes were the best of the XVII Open City of Palma – VI Memorial Sebastia Carbonell among 43 teams. Spanish trio in six hours caught 14 fish (4 cups) and the heaviest was a dusky grouper of 3065 grams. They also caught two congers, one moray, one dentex, a grey mullet, three red scorpionfish, three brown meagre and five white seabreams. All that brought them 36415 points.

Second team was Beuchat Spain with Avelino Sans, Joan Marques and Oliver Guerra with 27710 points (1 cup). Beuchat Spain caught the biggest catch of the Open, a white grouper of 10915 grams. Apart from that, they caught a dusky grouper, two red scorpionfish, a white seabream, three brown meagre and three forkbeards.

“In the beginning we started close to the shore, but the visibility was very bad. We could only see a few meters away. After one hour we had only one fish, a grey mullet and so decided to move to another spot, but again we didn’t see much. Then we went out, away from the shore, looking for deeper spots. The water was very clean, about 20 meters visibility, and on three or four spots we caught all of our fish. Maximum depth was 38-40 meters and we tried to catch more different kinds of fish so we could gain more points thanks to that and due to four cups”, said Raul Astorga,member of the winner team Licoretas.

Master is the competition where you can participate if you are an ex world champ, ex winner of Master, between first ten of the last World championship, or if you got an invitationfrom the organisation. This year as Federacion Balear established the new Cup for brands, one member of each brand team got an invitation. A special invitation was also sent to one Japanese spearo, Seiei Shimoji, who came for the first time in Palma de Mallorca. Shimoji, 64 years old professional fisherman from Okinawa is very popular in documentaries in Japan. Over there spearfishing as sport does not exist, and you can catch fish with speargun only if you are professional fisherman. Shimoji came with a big TV-crew, two underwater cameras and one above. He wasn’t prepared for the conditions in Palma, in fact he had a scuba wetsuit with removable cap. In the end he caught some fish, but they were not valid. Even so, Shimoji was very happy with new experience.

The best between 16 competitors participating to the Master was Oscar Cervantes, who obtained another first place after the one in the Open. Cervantes caught 16 fish (3 cups): two congers, one moray, a red scorpionfish, a grey mullet, a brown meagre, a black seabream, five white seabreams, a green wrasse and three St.Peter’s fish, the heaviest of which was 2425 grams. This is the second time that Cervantes becomes „Maestro“.

I did not have time for preparations, so I went to the spots that I knew from last years. In short time I caught six fish of different species. Then I went to deeper spots, which went down to – 40 meters, where I caught congers, white seabrams and St. Peter’s fish. The best spot I have in that zone is the one with St. Peter’s fish, which are fantastic”, said Oscar Cervantes.

The biggest catch of Master, a smooth grouper of 5095 grams, was caught by Italian spearo from Pathos, Giacomo de Mola, who was finally eights.

All preys caught at the Semana Master were given for charity to the SOS Mamas, who utilized it to feed the poor.

Text and photos by Valentina Prokic