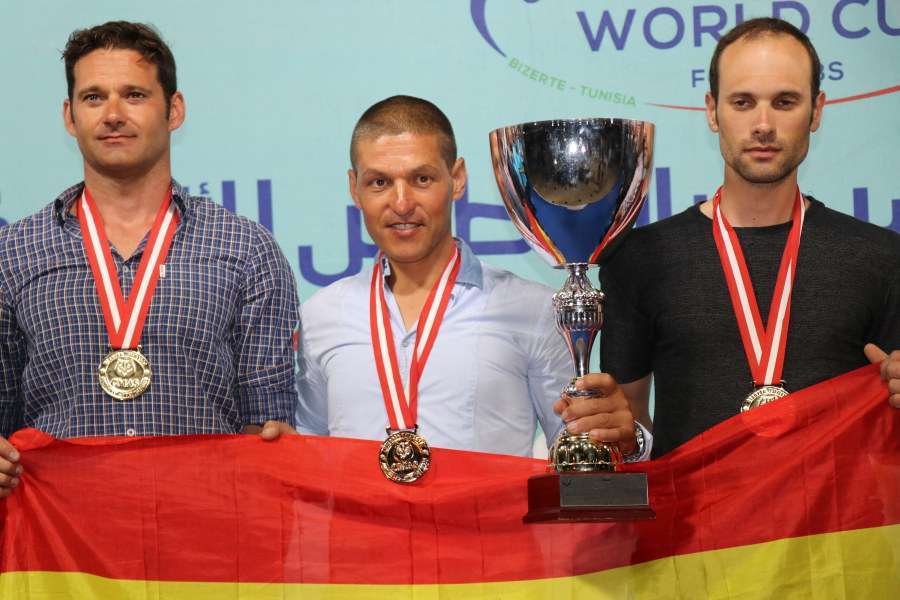 Spanish team CDAS Trafalgar has won the I° CMAS Spearfishing World Cup for Clubs organized by Tunis Sport Fishing Federation in Bizerte last weekend, an appointment we already presented, as only international media, before its start.

(Text and photos by Valentina Prokic)

In the 1° CMAS Spearfishing World Cup for Clubs 29 teams have participated, coming from Malta, Brazil, San Marino, Croatia, Italy, Alger, Cyprus, Tunis, Lybia and Spain. Some clubs had more teams, so in the end winning club was Trafalgar from Spain, second was SFYKK from Cyprus and third ASSE Bizerte from Tunis (two teams). Sub Club Brescia was forth.

After opening ceremony and defile of teams through town of Bizerte, day one was marked by Cyprus team with world champ George Vasiliou and his teammates Stelios Yiangou and Nicolas Nicolaou.

Fourth was CJS Atlantide Copertino with Alessandro Congedo, Giacomo Brunettini and Thomas D’Amico and 25585 points. After Copertino the difference with rest of the teams was very big so it was clear that battle for trophy will be between those first teams on day one.

Live video of athletes back to harbour with fish has been posted on Facebook and can be watched clicking here.

On the second day conditions changed to very bad, with a lot of strong wind from North-East, short waves and strong current generating difficulties for everybody.

Cyprus team was fourth with 23970 points and it was not enough for winning. Spanish team compensated difference from day one and managed to be first in general classification.

Sub club Brescia with Dario Maccioni, Gabriele Delbene and Roberto Dell’Avanzato came back with only one brown meagre of 1095 grams, but even with that they kept third place in total. They had a lot of good points in zone A, but on competition day spots were empty.

A big applause was made for Brazilian team with Francisco Loffredi, Gabriel Barra and Carlos Keiske (Clube dos Marimbas) for the amberjack of 25630 grams. The funny thing was that they got the spot in a restaurant a night before from some guy that heard them speaking about the fact they did not have any point to go on second day. He gave them a point and there was plenty of fish, also four big groupers, but these were too deep. Finally, when the amberjack appeared Brazilians got their jackpot.

Spearfishing legends Renzo Mazzari and Riccardo Molteni with Nicola Riolo finished on 12th place in the end, but they were definitely most popular spearos there. Everybody wanted to get in touch with team, take a photo, speak for moment and as legends do they made it all with big smile on faces.

Live video of athletes back to harbour with fish on day 2 has been posted on Facebook and can be watched clicking here.

Tunisian Federation make a great effort to organize such a big International event, but they had quite some problems due to lack of experience in organizing such world event, and bad communication between people involved in the organization was often an issue.