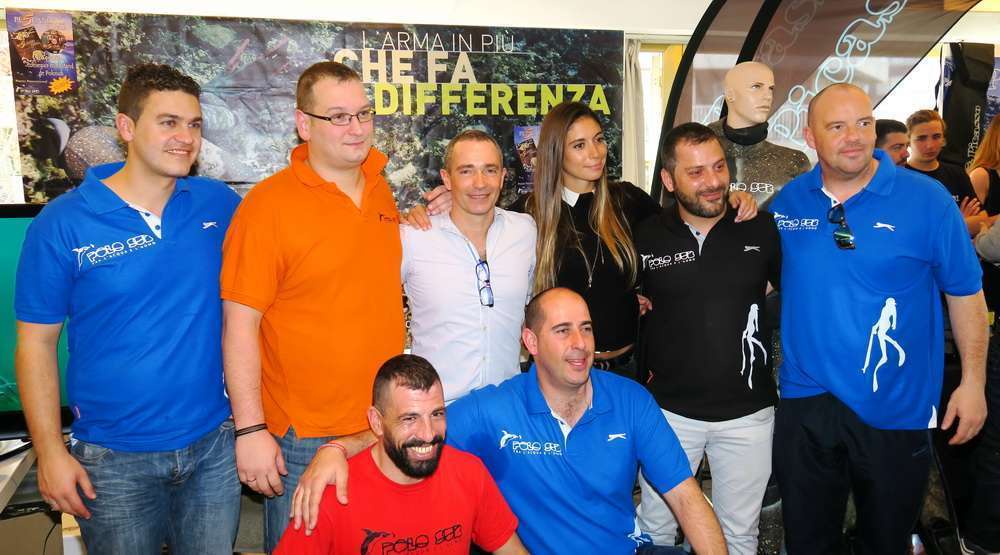 The product which is manufactured by artisans more than others is the wetsuit. Two italian companies, Polo Sub and H2O Hi-Tech were present at the Show in Barcelona.

Present with a large range of wetsuits, always more and more refined in every detail, Polo Sub does not really need any presentation. The company from the Italian capital of Rome manufactures tailored wetsuits of different neoprene types and camouflages, of which we have seen examples already at the Medi Show 2015. The quality of the product is confirmed from its international success. It is sufficient to take a look at internet and the social media, such as Facebook, to find images of spearos from any nation wearing their Polo Sub wetsuit and showing their preys.

If we have already presented wetsuits from the company of Rome, we also like to present Roberto La Mantia, who is the artist behind all the camouflages of the wetsuits of the company. Roberto is a strong spearo and also paints extraordinary images of fish of the sea. Paintings are mainly made with watercolors, but also, depending on the size, oil paintings on canvas. The works are visible on the Facebook page Il Mio Mare.

Less well known compared to Polo Sub, since the name was born 3 years ago, the company from Palermo, Sicily, Italy, the H2O Hi-Tech, is owned by Maurizio Mormile, previously owner of System Sub. Even though there is not much to invent in the wetsuits sector, Maurizio has kindly led us through the aspects on which his company is particularly focused on. Camouflage is an important part, with paint spread by sponge or airbrushing (particularly attractive the latter), with a specific solution that has the neoprene absorbing the paint in a way that the latter does not come off even with long utilization. The fragmenting of the image is much used by H2O, based on the camouflage in the sea linked to the way fish sea objects.

Bondings and details are fundamental and, the H2O wetsuits shown at the Kedada seemed to be of extremely high quality. All the profiles of the face, wrists and ankles are lined externally, to avoid any risk, possible with the smooth external neoprene, of cracking and breaking due to sun and sea water. These specific edges, in fact, are particularly stressed during the wear and unwear phases. Each of these edges also has a seam for additional reinforcement.

Also, the pre-shaping is particularly neat in the H2O, with curves given to legs and arms, but also the buttocks, while the profile of the waist of the trousers is pre-formed and lower frontally to help ventilation.

Neoprene utilized is of different types: Japanese, such as Eiwa SK and National (also in the sandwich version, thin in the external layer as already seen in the wetsuits by Polo Sub) and Yako (Korean).