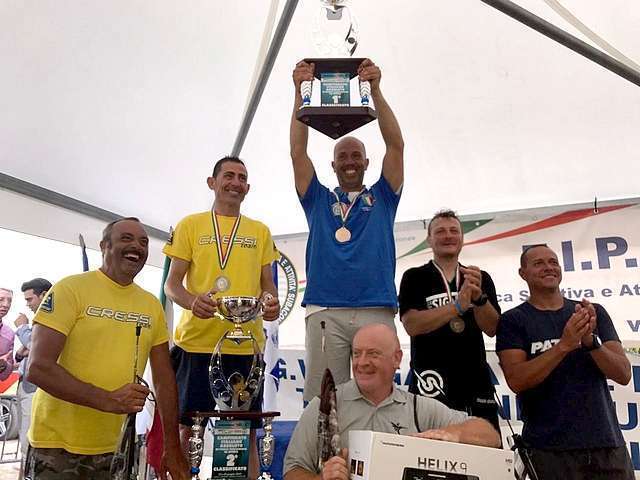 New Italian Spearfishing Champion is the athlete from Naples, Rocco Cuccaro (Team Omer-Sporasub), already considered one of the potential winners of the 2017 title. Second is Cristian Corrias (Team Cressi), from Sardinia, while third is the athlete from Palermo, Salvatore Roccaforte (Team Sigalsub).

The first day has led, as forecasted, to a greater number of preys compared to day 2. The extremely transparent water and the sea floor with good cracks has permitted good catches, even though, in general, less than in the 2016 Championship in Castelsardo. The great Omer-Sporasub team has practically taken the whole scene on day 1, positioning his athletes, Rocco Cuccaro, Valerio Losito e Nicola Strambelli, with 21650, 17946 and 14930 points, on the provisional podium. Amazing results in particular for the first two athletes with respectively 15 and 14 valid preys, and with Cuccaro closing two species with the breams (10) and the croakers (5). The 2016 Champion Luigi Puretti (Team Omer-Sporasub) has instead had a difficult day, catching nice croakers, closing them, but not going beyond 6 total preys.

In the official team battle the fourth athlete is Sigalsub Salvatore Roccaforte, with good 12 valid preys, but without being able to close any of of breams and croakers, a fact that has kept him pout of the podium of day 1. Alessio Piras (Team LeRoi) is sixth behind Puretti, with 6 valid preys.

Mares obtains a seventh position with Cono Corrado that catches 5 valid fish, while the strong Cressi athletes are more in difficulty in day 1, obtaining “only” eighth position with the national Dario Maccioni, who brings home 7 valid preys, without closing any species though.

To be remembered that rules indicate in 400 grams minimum weight of fish (ex. breams, croakers, forkbeards, redfish, etc), while congers and moreys are only for coefficient points and minimum weight is 2 Kg.

Second day appears as the revenge of the disappointed of day 1, with exceptional Cristian Corrias who is the winner of the day with 13 fish, 3 species and 13069 points, many less than day 1, demonstrating that the playing field of day 2 is more difficult, with a sea floor poor of good cracks in the rocks and so with very mobile fish, that has led atletes to scroll along the sea floor instead of working on the lairs found during preparation days. Second in day 2 classify is Andrea Settimi (Team Cressi), also very good with 9 preys, 3 species and 11474 points, after a tough first day. Third is Gianfranco Loi, (Team Omer-Sporasub), who also recovers with 9 fish and 4 species, for total 10974 points, after a disappoiinting day 1.

Rocco Cuccaro manages to keep his position with an excellent strategy that is worth 6 fish and 3 species for total 7788 points. Constant in performance, but this year unable to accelerate, is former 2016 Champion Luigi Puretti, who on the second day obtains a good number of catches with 5 fish and 3 species, for total 6120 points.

(In green the confirmed athletes of first cathegory, in red the downgraded ones to second cathegory)