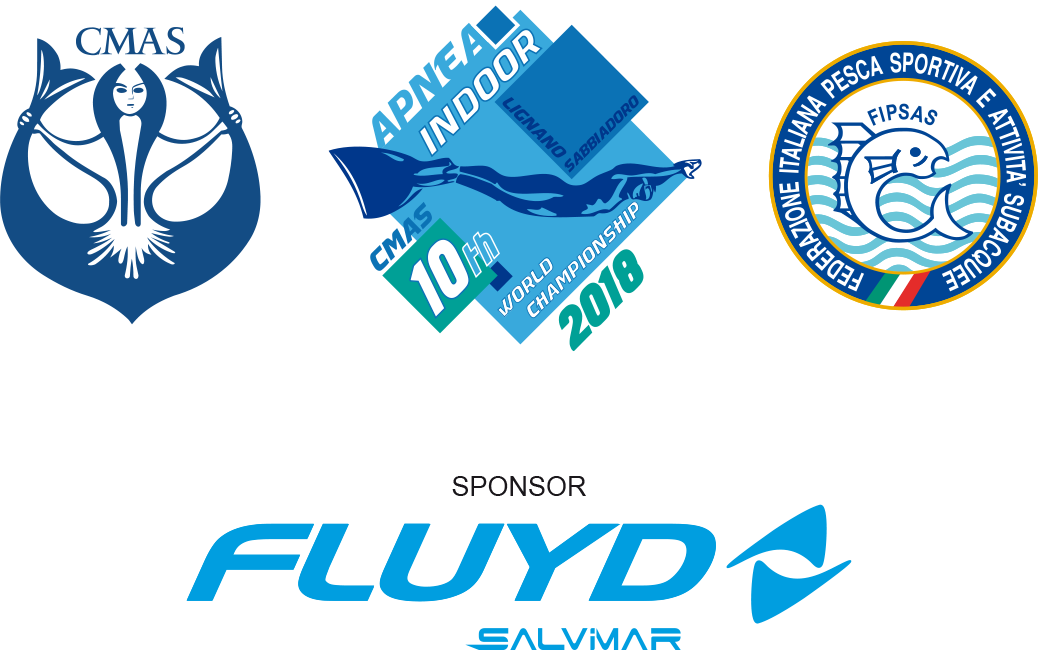 On 11 June 2018, upon all the delegations arriving in Lignano Sabbiadoro (UD), the tenth edition of the CMAS Apnea Indoor World Championship will begin. The event will take place in friulian municipality from 11 to 17 June 2018.

Apneapassion had already followed the 2016 CMAS Apnea Indoor World Championship, with World Records in particular by Zecchini, Boeri and Elu, in DYN and DNF.

The event will be staged by FIPSAS in conjunction with the “Underwater Activities International Events” Organising Committee, and will feature about hundred and thirty athletes representing the following twenty-four Nations:

The opening ceremony marking the official start of the Championship will be held on 12 June 2018 at 18:30hrs at the auditorium of the Swimming Centre located in the Bella Italia Sports Village (Viale Centrale, 29 – 33054 Lignano Sabbiadoro – Udine).

Fourteen World titles will be awarded in total, one for men and one for women in each of the following specialities:

The event will be fully covered live streaming at the following URL: https://livestream.com/FIPSAS/ApneaIndoorWorldChampionship2018

(*) Dynamic Apnea (DYN – DNF) is a discipline where the athlete aims at covering, with (DYN) or without fins (DNF), the maximum horizontal distance while keeping his/her body underwater. This discipline takes place in the pool with fins (DYN: bifins or monofin) or without fins (DNF). When used, bifins or monofin must be moved solely through the athlete’s muscular strength without the aid of any mechanism, including mechanisms triggered by the muscular system.

(**) Static Apnea (STA) is a discipline where the athlete aims at performing a freedive for a maximum time very close to the time stated initially and, possibly, even longer. This discipline takes place in the pool.

(***) Speed-Endurance (S&E) Apnea is a discipline where the athlete aims at covering a fixed distance within the shortest possible time while keeping his/her body underwater. This discipline takes place in the pool and consists of covering stretches of the pool length by alternating apnea swimming with passive recoveries at the end of each stretch. Speed-Endurance (S&E) Apnea may be performed with fins (SWF – EWF: bifins or monofin) or without fins (SNF – ENF). When used, bifins or monofin must be moved solely by the athlete’s muscular strength, without the aid of any mechanism, including mechanisms triggered by the muscular system.