“It’s hard to be sure to win in our sport, but I always want to win when I go to a competition. Personally, I didn’t expect to win because Porto Heli is Sideris’ zone, but my friends did. I was told that I was in good shape, that the time had come for me to finally win the title of champion, because I had been second three times and third once in individual championships“, said Gerasimos Kavvadias.

A two days championship was held last weekend, 31st of October and 1st of November in the area of Porto Heli, and it was organized by the Club Alias Porto Heli. 19 athletes participated to the National Championship.

Kavvadias was first on day one with 27600 points, Giannis Sideris was third with 21380 points and Yiannis Ringas fifth with 10300 points.

Kavvadias caught a dusky grouper of 9040 grams (counts only till maximum 6 kg), two white groupers of 3520 grams and 2940 grams, two brown meagres, three parrotfish, one grey triggerfish of 1500 grams, and one amberjack 3340 grams, for total of 10 fish and six species.

“I have never dived in this area, but I think it is even an advantage because if you do not know the zone you can try everything, you are free. When you’re at home it’s always the hardest to win, everyone expects it from you because you know the zone best, but on the other hand what you know always affects your tactics in some way“, said Gerasimos Kavvadias.

“I live in Porto Heli, but I don’t fish here, because I don’t like it. I went for three days scouting and four days to check the spots that I found. When the other athletes came I stopped going to sea. The second zone was practically an island where I spent five days. On day one all the spots where I dived were new for me. Most fish had changed place, so I had to change a lot of spots to catch fish. I was free in thinking about what to do next, where and what to catch. My plan is always the podium so this result is good for me“, said Giannis Sideris.

Ringas brought on the weighing two parrotfish, two grey triggerfish, one amberjack and one white grouper of 3220 grams.

“During day 1 I lost one grouper around 5-6 kilos that stuck inside the hole, and a golden grouper around 3.5 kilos, the end of the shaft broke and I lost it. But the second day was my day, and I caught a big grouper and won the day. In the end fifth and first place were enough for the podium“, said Yiannis Ringas.

Ringas spend five days on preparations and he was fishing between 10 and 43 meters.

“The area was deep and I expected to do well but not all perfect. It was a difficult competition because I had very strong athletes to compete against, especially Sideris as Porto Heli is his home“, said Ringas. He used 6mm daiwabo wetsuit from XT Diving Pro, fins XT Dving Pro competition model and spearguns from KM Dive and El Greco Spearfishing.

Conditions were great during the two days of competition, but even on preparation days.

“I can’t get 10-15 days to prepare because of work, I work at school, so I was on preparation for seven days, but one day we couldn’t go to sea because of the weather. The other six days as well as the days of the competition the weather was good, the sea calm, no wind, no current. Visibility changed, in some places, it was three, four meters, in some it was eight to ten meters, somewhere even 20 meters“, explained Gerasimos Kavvadias.

Yiannis Ringas won on day 2 with 15820 points. He got one dusky grouper of 11680 grams (counts only till 6 kg maximum), three mullets, one parrotfish, one dentex of 1160 grams and one goldline.

In second place was Sideris, who caught a white grouper of 3960 grams, two white seabreams and three brown meagres, and got 12680 points.

“I caught all the fish from 48 till 59.7 meters of depth. The white grouper was the only fish that I knew from preparations. Shallow I went for white seabreams, that were at 12 meters, but brown meagre were at 59.7 meters. Visibility was good on both days, and the temperature about 23 degrees. The thermocline was above 52-53 meters. Most of the caves were too long because in our competition the torch is forbidden. So you can understand how hard is to do agguato below 50 meters“, explained Sideris.

Kavvadias finished fourth on the second day with 9240 points, but in the end it was enough for the title.

He had on the line one goldblotch grouper of 2680 grams and one mottled grouper of 4760 grams.

“My tactic was to be great in one zone, catch as many fish as possible, make a bigger difference, and then play in safe positions in the other. I wanted to catch that one fish more, to be sure of victory, but in the end the grouper escaped”, said Kavvadis.

“I did everything I planned in two days. I’m sorry the grouper escaped in the last dive with an arrow in it. It was the shallowest fish I had, at 34 meters. It weighed about 8 kilograms and if I had caught her, I would have had the title already at that point, no doubt about it. This way I just actually thought I lost to Sideris by two, three percent. But Yiannis Ringas did a good job the other day because he had a lot of fish and so the percentage difference between me and Sideris was smaller. The deepest fish was a 3.5 kg white grouper I caught at 57 meters“, said the new Greek champion.

The biggest fish of the championship was caught by 18 years old Apostolos Tzoumakas, a grouper of 13860 grams around 40 meters of depth. Tzoumakas also caught a nice amberjack at 52 meters depth. He is a champion in mountain running, but also very talented for spearfishing.

Complete results of the 2020 Greek National Spearfishing Championship below. 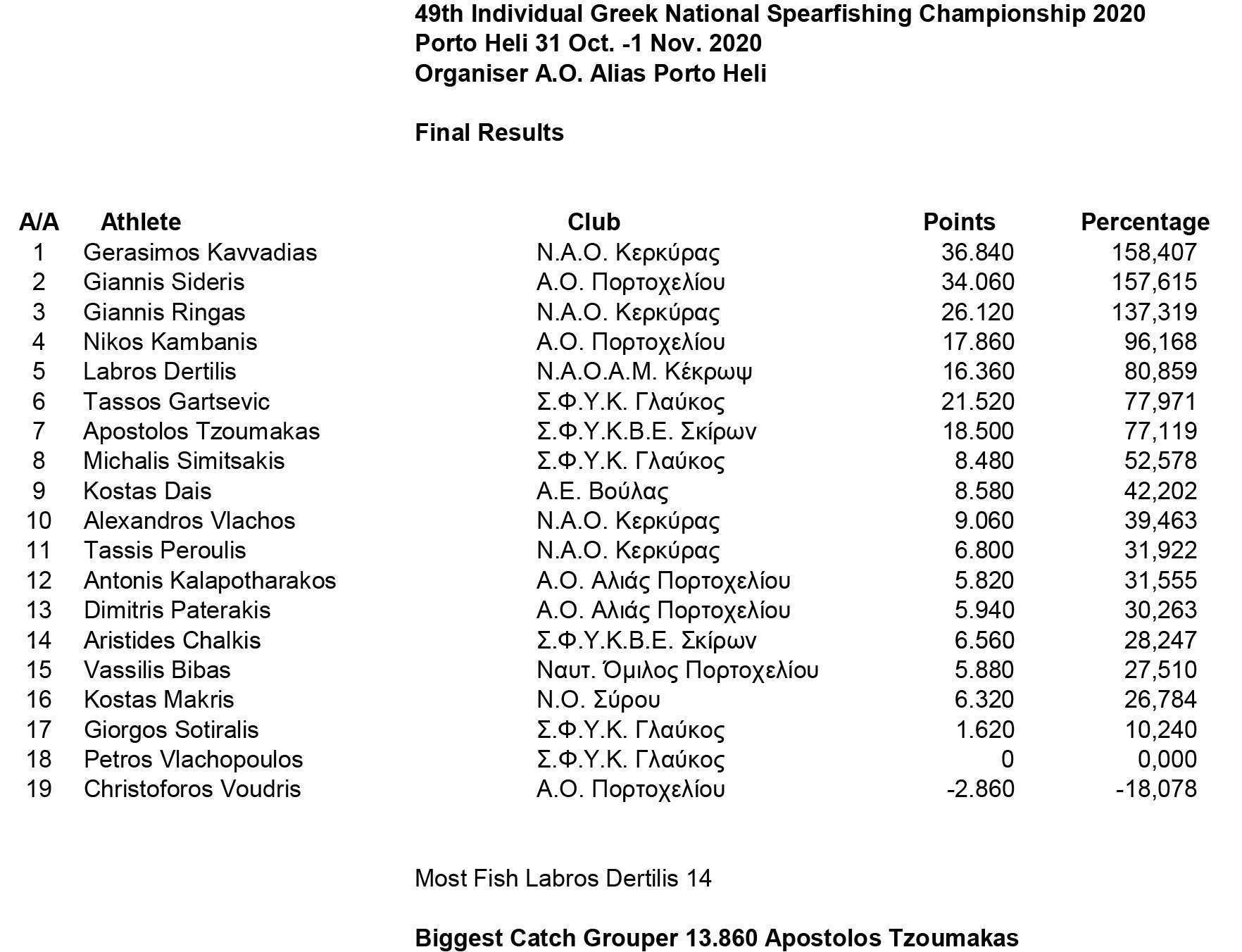