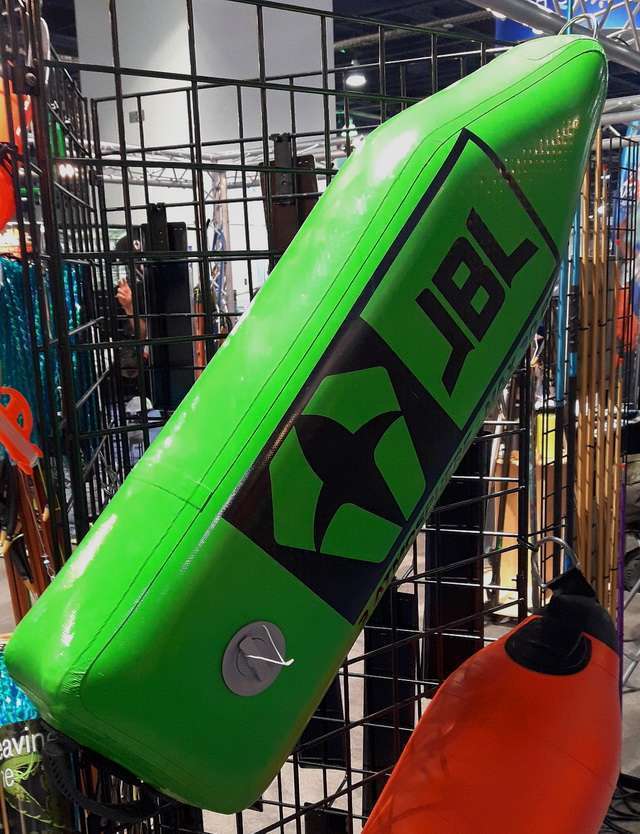 We have met, at the Dema Show, Sam Skinner, Brand Manager at JBL International, one of the most important American Spearfishing companies, specialized in sling guns, and not only.

Apneapassion: Hi Sam, which are the novelties by JBL at the Dema?

Sam Skinner: Certainly the float system, with top and bottom handle, a rigid structure and a special wide shape, obtained thanks to internal fiber panels. This rigid and wide structure has more surface in contact with the water, so it creates more friction and better contrasts the pull of big fish. The rigid structure was the only way to have the float system keep the shape instead of becoming a balloon.

Then we have the flasher system, all wrapped inside a plastic container: You can unroll the 6 feet long line and the container will work as a float, so the line and flashers will be hanging down in the water. Fish will then come up to the surface and start swimming round the flashers.

The carbon fiber fin blades, the “Xcelerator” are also a complete novelty by JBL. They are mounted on our own foot pockets that are extremely refined: 100% Latex, of three different densities, which means they differ in hardness. The rear is soft, the upper part medium and the sole hard. The blades are made of Pre-Preg 45° twill of two different hardnesses: soft and medium. The angle between foot-pocket and blade is equal to 26°.

Regarding sling guns, we are here present with the Reaper, already on the market since last year, but now upgraded with two camouflage colors of the barrel: Sea-Floor and Aqua Kryptek. These spearguns are made with a 100% steel release mechanism. The muzzle has guides for the rubber bands that are lifted to have an elongation parallel to the barrel and the shaft, meaning the release phase will see the bands move in the most efficient direction.

Last but not least, the Vertigo wetsuit has a camouflage coming from the pattern of the Military Ships during World War 1, where the stripes make it hard to understand which part of a ship, or object in general, we are looking at. The base of the camouflage of the Vertigo sees the stripes overlaid on a tropical reef imagery. The cap of the wetsuit is very interesting also, with a couple of intelligent solutions such as the neoprene over the ears, which has lining inside to avoid the typical sucking effect, while on the upper part of the cap a tiny hole lets possible air bubbles out. This last solution of course makes sense with warm water and thin wetsuits (for example 3.5 mm or less).