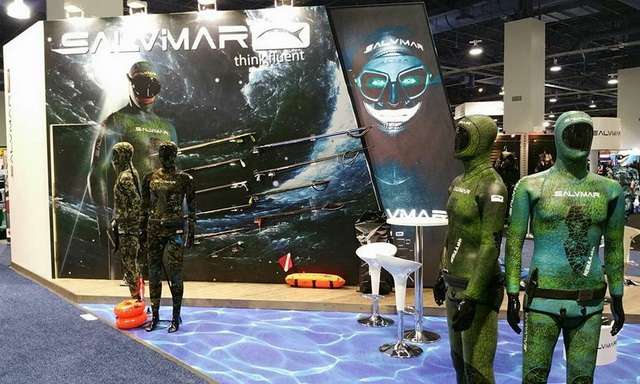 At the Dema Show 2016 we have interviewed Stefano Salvi, owner of Salvimar, and have talked about the best performing Salvimar products in the US.

AP: Stefano which have been the steps by Salvimar to enter in the US market?

SS: In 2014 we have consistently started to work on the US market, with quite a few difficulties, as our distributor was not sufficiently skilled. The real turnaround has been achieved last year with Maverick America. Thanks to them and to a very high level product line, today our growth is 50% compared to 2015 and evidently we are extremely pleased.

AP: Which are the spearfishing products that are having the best performance in the North American market?

SS: Certainly theNoah among the masks, but also the Endless and the Maxale. In the wetsuits, the N.A.T. has had a great success. Also the pneumatic spearguns have been well accepted by the US customers. More difficulty has come from the sling guns, as the American customer did not feel the old release mechanism as sufficiently tough for loads of for example 3 elastic bands of 14 or 16 mm diameter. We have learned from this, listened to the indications of the market and designed a new release mechanism which is highly superior to the previous, and technologically ahead of competition. Such system, the Metal, is mounted on the homonym sling gun, but also on the Atlantis Metal and the Sapiens Metal. These new products are certainly very valid for the American customer who is very attentive and demanding.

AP: And what about the fins?

SS: Our carbon fiber fins, the Boomblast, have given us great satisfaction, and are known as exceptional blades, also due to their amazing manufacturing quality that in 4 years since start of sales has permitted us to have not even one return by customers, an aspect that the American spearo, very careful and well present on social media to share experiences on equipment, has appreciated a lot and has prized.

SS: Yes, this is a product offer that is added on top of the already existing fins. The manufacturing quality will continue to be of maximum level, where in particular the production of the Fibra151° and the Carbo151° will follow the same process as the Boomblast, ensuring the same maximum quality, reliability and safety. 151° stands for the blade foot-pocket angle, measured in respect to the flat angle of 180°, meaning 29° in the traditional way. In addition to this angle, the Carbo151° differ from the Boomblast in the shape, where in particular the Carbo151° do not have the V shape flap, but a convex shape, and in the rigidity of the blade.

AP: The Fibra151° take us to the apnea and freediving world and to Fluyd, as Alessia Zecchini, both apnea Indoor and Outdoor World Champion, uses such fins to obtain her performances. How is the freediving market in the US?

SS: The freediving and apnea World is much smaller than the one of spearfishing, but still it is growing. Until this year with Maverick we have focused only on spearfishing. Now that this sector of our business is working well, we will be able next year to develop the commercial part of Fluyd also in the US, considering our success in markets like Europe. We will see the results, as for sure the business and many products are very different from the ones of the spearfishing sector.

AP: What about the swimming product line?

SS: Also in this area we are at the start in the US. Certainly the agreement of collaboration with Jaked has extremely accelerated our research and development bringing our costume and swimming suit line to a very high level.