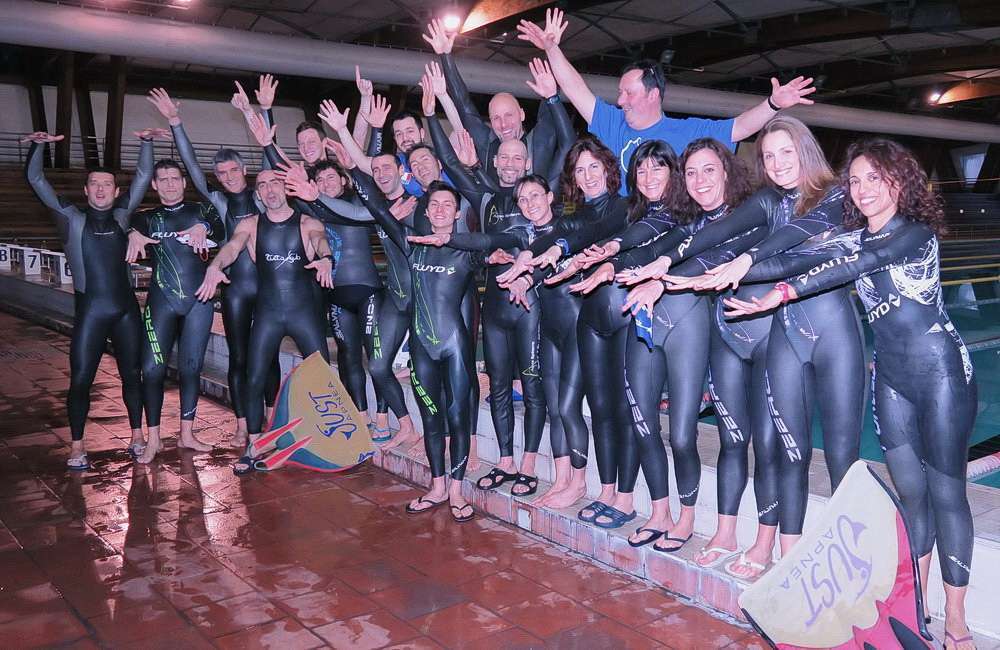 The Apnea Indoor World CHampionship 2016 will be held in Italy, in Lignano Sabbiadoro (UD), from the 6th to the 12th of June. The first phase of the training of the Italian National Team starts, looking at this great appointment at home. After the 2015 Apnea Outdoor World Championship in Ischia, Italy is once more protagonist in 2016. Not only the locations give Italy honor and visibility, but also and mainly the strength and preparation of the Italian Champions. A clear indication of this is the fact that in last year World Outdoor Championship in Ischia Italy has ended in first position with 10 medals, among which 5 were gold, 4 silver and one bronze. But there is more: in the last Indoor World Championship held in France, in Melhouse, Italy has once more been leader with 8 podiums, equivalent to 2 gold, five silver and two bronze medals.

It will still be the woman who has led Italy to victory in France, Monica Barbero, to be the Technical Director of the Italian National Indoor Team. With her we have has a chat at the first stage that has taken place in Rome the 5-6-7 of February.

AP: How was the idea born of this first stage with the candidates to the national team at the 2016 Apnea Indoor World Championship?

MB: I have wanted 3 stages to monitor the athletes in 3 different moments of the year: the initial one, at mid point and just before the World CHampionship. Only in this last occasion I will make the final selection.

AP: Which athletes have been summoned for this first appointment?

MB: All the athletes who have participated to the last Wrold CHampionship in France, from whom are missing Ilaria Bonin, busy in another activity, and Alessia Zecchini, with health problems that will be soon solved. In addition, we will have athletes coming from the “Progetto del talento”, strongly wanted from FIPSAS. This is a project aimed to young athletes who have never been part of the national team, and who are the future of our sport. Among these are Antonio Mogavero, year 1997, and Martina Mongiardino, year 1990.

AP: Right, the future of Indoor apnea. How do we support this sport?

MB: We must focus on the youngsters, already starting from 15 years of age. In such a way a specific development and training program can be set, especially in the monofin apnea, which needs specific movements.

AP: Good, and how do we involve the youngsters?

MB: In my opinion, a very good activity is to invite schools to the apnea events, and surely this year World Championship is an extraordinary opportunity. I must say that FIPSAS and CONI have already organized a project named “Subacquando in Apnea”, involving three apnea organizations, Apnea Futura, Agonismo Sub Torino and Mozzate Sport, who have managed to put together almost 100 boys and girls of ages between 11 and 15 years.

AP: In these two and a half days what do you whish to transmit to your athletes, which working plan do you have?

MB: Certainly will will aim to offering hints to the athletes to help them define the best training methodologies for their specific use. We have started Friday with exercises on dynamic apnea without fins (DNF), analyzing the swimming technique. Saturday we will exercise on dynamic apnea with monofin (DYN). Exercises will be of Stop & Go, meaning a phase of static apnea and then a start with dynamic. FInally, Sunday we will concentrate on the dynamic apnea with two fins. In this phase, in general, we will concentrate a lot on the technique, also with video shooting. Only after we will work on distance.

AP: From France to Italy, this year you will be at home. Which will be the advantages and which the disadvantages?

MB: Certainly competing in Italy can be an advantage, since many athletes know the swimming pool where we will be, and this counts a lot, but it will also be a matter of the tranquility of an Italian organization can make the Italian Tam feel more comfortable. On the other hand there is an additional tension given by the need to demonstrate something more, going beyond one’s limits, under the eyes of relatives and friends.

AP: And which are the strongest national teams with whom you will compete?

MB: We do not underestimate anybody, but in last year World Championship France and Croatia have demonstrated to be incredibly strong. If on the men’s side we have then three nations battling, on the women’s side I must say Italy has been way strongest than competition.