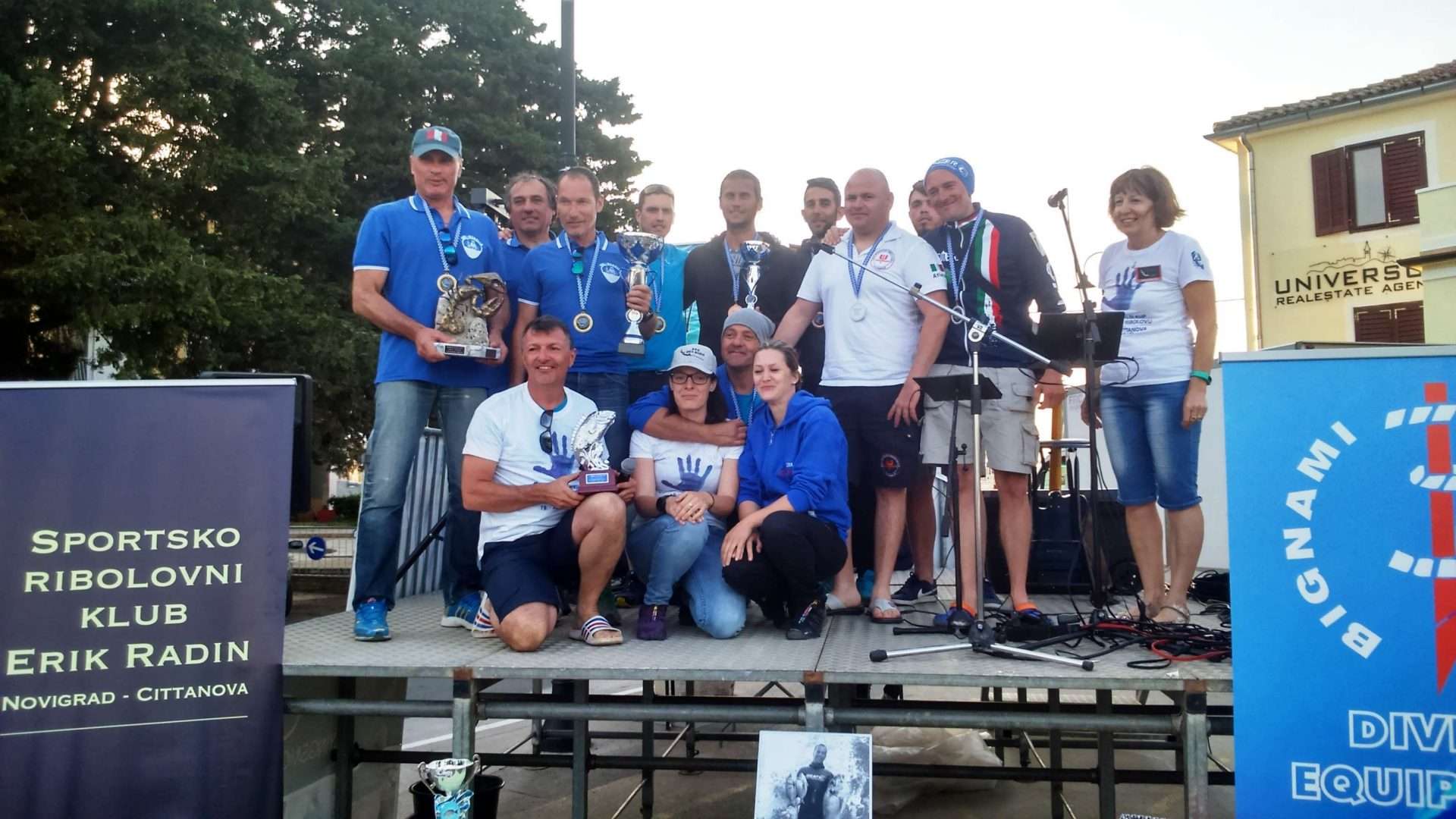 In Cittanova, Croatia, from 18th to 20th May, the 5° Spearfishing Memorial Erik Radin has taken place.

Program has started Friday 18th with the innovative formula of useful lessons for the participants, and in particular:

Dott. Marko Velepič: “Extrenal and medium ear. What is important for the spearo?”

Mario Dugonjić “Diet of the spearo”

Saturday has been the day of the competition of Memorial Erik Radin, with 68 participants divided in 26 teams. Sea was calm or slightly wavy, but quite misty, and for the athletes that did not know the area and were not particularly used to turbid waters, such situation has been quite a trouble in finding fish. Teams from Italy, Slovenia and Croatia have participated to the competition.

This year catches have been of extremely high level even though meagres, the most common preys, where in a fishing stop. Main catches have been wrasses and congers, but also fantastic basses, glithead seabreams and a 5 kg dentex have been caught. The latter has been the pray of local spearo Marino Reinic who, thanks to such catch, has won a specific cup and an Epsealon wetsuit sponsored by Scubatom company of Lubiana, as prize for the most precious catch, a very much appreciated category of spearfishing.

After the end of the competition and the weighing phase, the members of the KSR Medulin team, made by Dejan Mickovic and father and son Branko and Nikola Ikić, helped on the boat by Zeljko Popovic, have celebrated first position. Second place was achieved by team Jebiga, with Stefano Claut, Roberto Mastromauro and Andrea Caiffa, while third position was conquered by team KPA Rovigno 1, made by Daniel Karlovic, Matteo Ussich and Paolo Babic.

After weighing a lottery for visitors has taken place, where prizes have been the fish caught, and another lottery for competitors, where main prize has been a very precious wooden sling gun manufactured by Croat Neven Grubelić.

Sunday 20th of May it has been possible for spearos and visitors of Cittanova to taste a fantastic soup made with the fishes caught the day before.

The entire 3 days program has been brought forward in a very positive atmosphere and great organization, to which organizers of SRK Erik Radin have given much contribution, together with volunteers and sponsors, without which such a high level result would not have been possible. Among all the rest, we point out the brand Flying Smoker of Tomo Krašovec, who has donated meat for 150 people.

Members of SRK Erik Radin have once more demonstrated that they are able to organize high level events, and such capacities have also been confirmed by people responsible of the Croatian Association ofr sport fishing, who have assigned to Cittanova the organization of the individual National Championship in the month of October this year.

For some, this has been the first contact with the conditions of the waters of Cittanova and a good axperience for the upcoming National Champ.