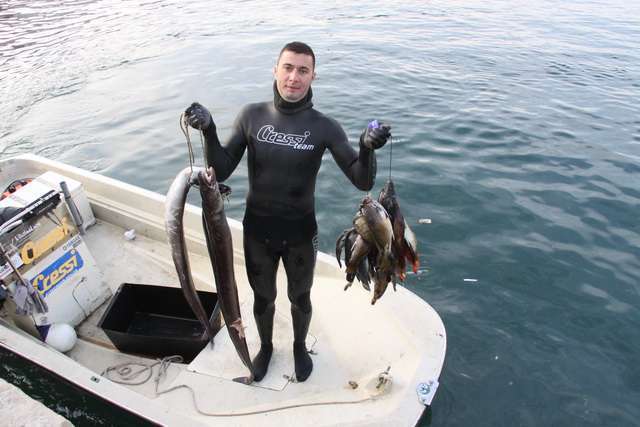 It is Daniel Gospic, Champion of the Croatian Team, and World Champion with Cressi in 2010, to win the 39th Cup of Nations.

In the Team classification Croatia is first, followed by Greece and Montenegro.

The biggest catch has been made by Sideris, with a fantastic conger of almost 10 Kg (9.400), while the fish with the higher value in points was a sea bass of 1172 grams caught by the athlete from Montenegro Bozidar Radosevic.

Also the 55th Cup of Town has been competed, with 16 teams from Croatia, Italy, Greece and Montenegro. Winner has been the Team Mali Losinj, made by Marin Kraljic, Slaven Cubric and Radoslav Jakupovic. The winners have managed to catch, in the area of the island of Ilovik, 10 fish and 4 congers, for total 21246 points. Second classified the Miholoscica Team, made by Danijel Toic, Danijel Haluska and Boris Brecic, who have totalized 21182 points, thanks to 9 fish and 5 congers. Haluska has caught the biggest prey, a conger of 14 Kg! Third classified has been the Team Susak, with Matteo Vidulic and Branko Vojnikovic, with 11 fish for total 17306 points.

The prey of greater value has been a sea bass of 2080 grams caught by Marijan Zic of Team Krk.