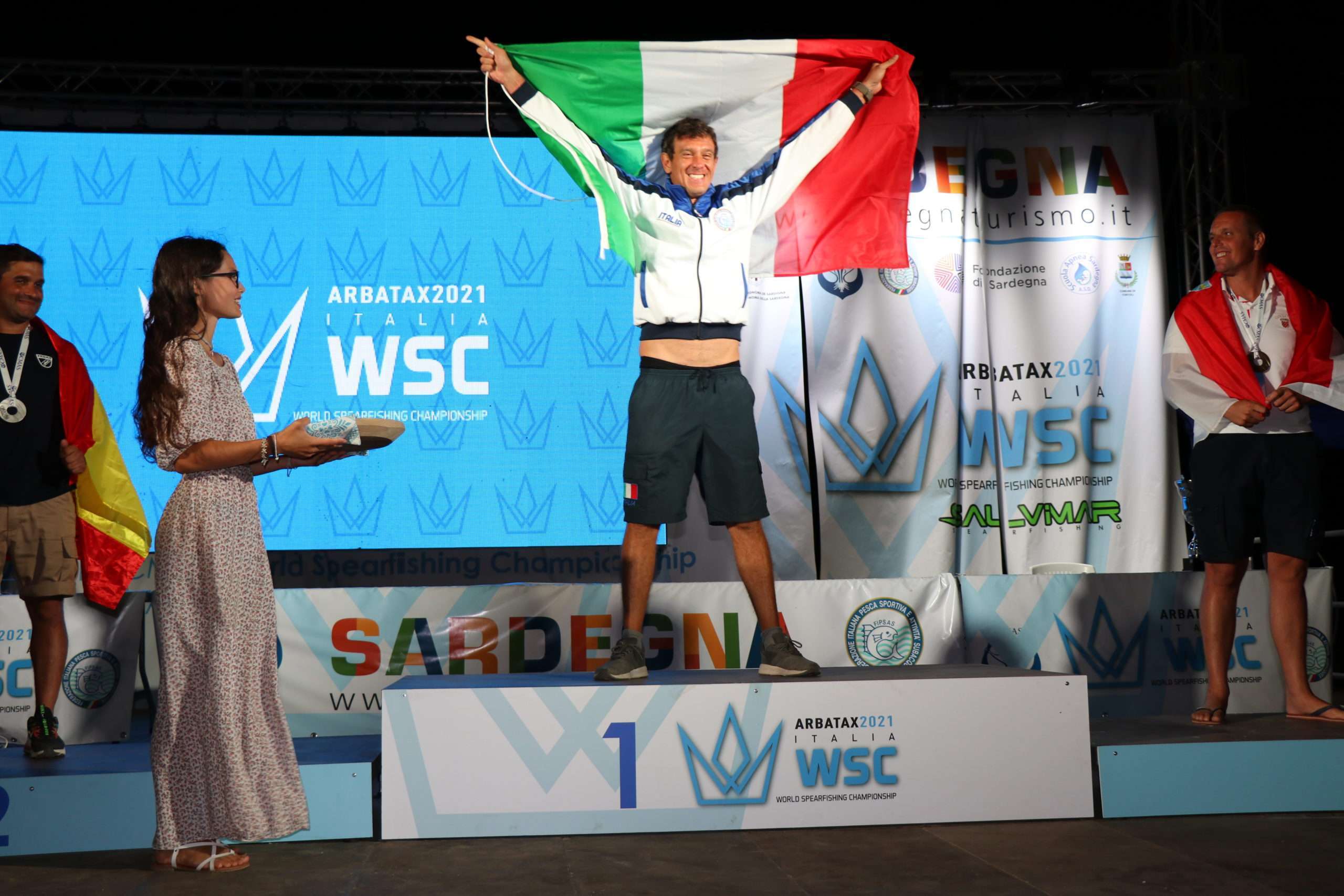 Giacomo De Mola wins the 32° World Spearfishing championship held the past weekend in Arbatax, Sardinia, Italy. On both days of competition the Italian athlete has managed to conquer the first position, underlining his absolute strength and perfect mental and phisical condition, managing to beat amazing champions like the Spanish Oscar Cervantes, the Croatian Stjepko Kesic and the Greek Ioannis Sideris, respectively second, third and fourth.

De Mola, after a month of preparation, and thanks to an amazing and very efficient technique, which consists of spearfishing going down even below – 40 meters with two spearguns, and so being able to catch two fish for each dive, has the highest score on Saturday and Sunday. In fact, considering around 15 minutes surface time recovery after dives below 40 meters, the possible dives in one five hours of comeptition can be around 20 – 25, and so efficiency is also the key to success.

“I did not expect this result, and I expected around 80%. I expected other athletes to catch white groupers in fact, but it is ok like this. Thee catch that have given me more satisfaction today are the scorpionfish, because I caught 4 in two dives, using two spearguns. The other fish has been the grouper, that I had to shoot two times, as it was going away, and so the first shot was not in a good position. So the grouper went in the cave, so I had to go back up and make another dive. I was finally also worried for the weight as in Sardinia fish seem to weigh less then what thy appear, but finally 3.6 kg is good. Tomorrow’s compeetition field is my good one, but in general I think in general competitors will catch more fish”, commented De Mola after weighing of Day 1.

“In general I am always calm and when I put my mask and snorkel on all is going away and I am focused on fishing. After 2.5 hours I had already 10 fish and so I was quite relaxed for today. Tomorrow the zone is better than today, but it is quite similar, but I do not have a white grouper. I saw one once during the preparation, and so it is difficult to find it”, has commented Cervantes at the end of Day 1.

“I did not expect this good result. When I found the white grouper during preparation I was not sure someone else would have caught it beofre me. When I managed to catch it this morning I was happy, but still had no idea which position I would have gained. Tomorrow is a better zone, but I have no white grouper. I cannot really make a prediction on my result for tomorrow”, said Kesic.

On Day 2 it was amazing to follow the competition starting a little bit earlier (8.45 versus 9.15 of Saturday), with an amazing battle between the two leaders, De Mola and Cervantes, moving together on the competition field, catching scorpionfish one after the other, aiming to close the species (maximum 7 fish obtaining also a 1,000 bonus for this). The show was on during the live streaming set by Apnea Passion, with studio images and guests and live images from two boats at sea (starting from minute 30:30 on the video).

The double speargun technique by De Mola (who trained for this since months), seems to give a good advantage on Cervantes, with the Italian coming up often with two scorpionfish against one by the Spanish. After one an da half hours in fact the Italian “closes” the scorpionfish and starts to check the spots with the seabreams, while Cervantes has not closed the species.

Day 2 ends as predicted with many more fish than Day 1, but no white groupers. De Mola is astonishing with 22 preys caught, while Cervantes is also extremely effective, but stops at 16 (79.83%). 19 fish for Sideris, but smaller than the Spanish, and so finally the Greek athlete is just slightly behind the Spanish (79.74%). Kesic is fourth, but a little bit further away from the lead (63.32%). Fifth is an amazing Jaco Blignaut, the South African athlete doing even better than the previous day, with 11 fish and 62.90%. Sixth is the Spanish Raico Garcia Habas (61.09%), a great result after having substituted Angel Crus Gutierrez who felt sick on the Day 1. Same problem happened to Don SOlomon of South Africa in Day 2. Seventh is Gerasimos Kavvadias (60.11%), the second best of the Greek team after Sideris. Eighth is another Spanish, Oscar Hidalgo Fernandez (56.58%), while ninth is the Croatian Antonio Buratovic (49.50%). Tenth and eleventh are respectively the two Italians, Cristian Corrias (44.14%) and Dario Maccioni (43.07%), both not doing as well as expected, but still with a good performance. In particular, Maccioni loses one hour at the start due to technical problems with his boat, and finally managing to recover with a wonderful mottled grouper (4870 grams).

The secrets of the techniques of the new World Champion Giacomo De Mola can be learned with the course he created and can be purchased on the website: https://professionalspearos.com/