(Text and photos by Valentina Prokic)

Split Team wins in front of Luben and Volosko

Spearfishermen of the club Split, Ervin Siriscevic, Tonci Siriscevic and Petar Prkic, are the winners of the 27th Croatian Spearfishing Championship for Teams held in the organization of Club Volosko in the waters of the island of Krk.

During the five-hour fishing in the zone between entrance to port of city Omisalj and the monastery in Glavotok, the trio from Split caught four mullets, two white seabreams, two rainbow wrasses, one brown wrasse, a red scorpionfish and four congers, which brought them 19932 points.

Second place in the competition of 12 teams went to Luben Team from Rijeka, with Boris Reinic, Aleksandar Tomic and Dario Babic.

Reinic, Tomic and Babic collected 18609 points, and they had five mullets, two rainbow wrasses, two brown wrasses and five congers on the wire.

“We did most of the zone check during March while it was quarantine due to the virus, and then we found some new spots, so we took advantage of that. It was very difficult to move by sea, it was impossible to go to one area of the zone. We wanted to fish in the part towards Omisalj, but we couldn’t, there was a lot of current and we wasted too much time on the spots. After two hours our GPS stopped working so we had to improvise with the positions. We caught most of the fish in those first two hours”, said the experienced Boris Reinic.

Reinic (56), Tomic (47), Babić (46) and skipper Miljenko Ban (63) are definitely the most experienced team in the championship, who can easily fight with much younger spearos.

The third position was won by the team of the Club of organizers Volosko – Luka Kamenski, Sasa Tomis and Bruno Zic.

They had fish worth 16,633 points on the line – four congers, one white seabream, two red scorpionfish and five mullets.

The weather did not go to the advantage of the competitors and organizers, because the strong south wind, big waves and the current made it difficult to move to and stay in a position, but only two teams ended up without a valid catch. So, even with difficult conditions, the spearos managed to bring some nice catches to the weighing.

The most valuable fish was caught by Sandi Imbrisic from the fourth-placed team of Marlera Liznjan, a forkbeard 1605 grams, and the largest red scorpionfish of 1366 grams was caught by Matej Njavro (Pjescana uvala). 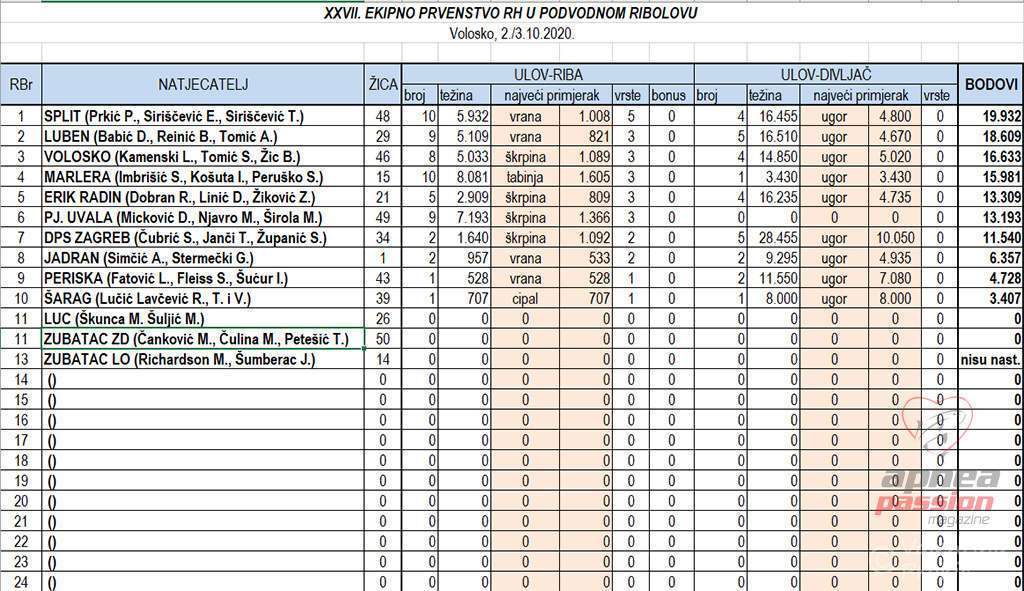