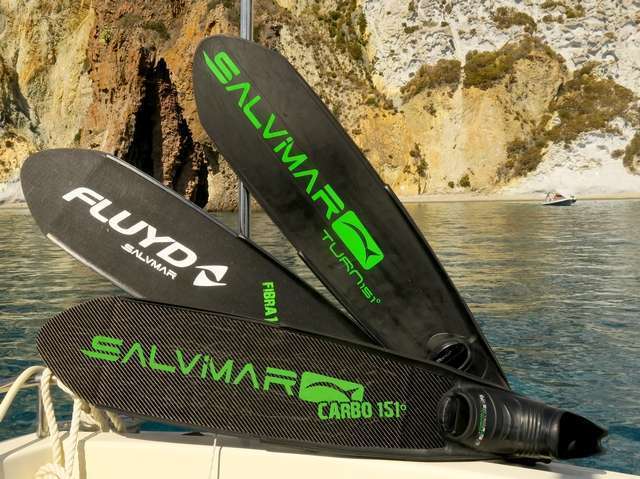 Salvimar has accustomed us to leading ahead of all and astonish with novelties and new innovative products. In some way, also the new fin family named 151° represents something unique.

On the market there are all types of fins, and for freediving and spearfishing, our passions, materials go from plastic (also named polypropilene), to glass fiber and carbon fiber, also with some solutions, of no real success, with Kevlar inserts.

Generally though, some companies tend to concentrate on composite material blades (so glass and carbon fiber), some other on plastic materials, some others again on carbon fiber and plastic materials. It was until now difficult to find companies with a complete line of fins (blades) in the three different materials, and there was no company until today to have blades in the three materials with the same exact dimensions. Salvimar has now this offer with the 151° line.

For best price guaranteed of the 151° Salvimar fin line click (and wait a few moments) here.

They are the Turn 151°, in polypropilene, the Fibra 151°, in glass fiber, and the Carbo 151°, in carbon fiber, the 2017 fins novelty by Salvimar. The three blades are all mounted on the Delta One K-Reinforced foot-pocket, with no lateral clip system on the longerons (clip is internal), for easier and quicker mounting of blades on fins. 151 are actually the degrees between blade and foot-pocket, but to not get upset, as it is just the same as 29°, simply considering the opposite angle of the 180° flat angle.

United by this angle, the 151 are also the same in all measures, such as length and width of the blade, while of course thicknesses differ depending on the material used.

These are maybe the real big news of the 151° line. Of important dimensions, in particular length, as for the new trend that sees longer and longer fins for best efficiency, the Turn 151°, made in polypropilene, measure 75 cm in length in the center and 63 cm laterally, where the difference is given by the accentuated convex shape of the flap, also this one a characteristic not very common on polymer blades.

Thickness is differentiated along the blade, but also in a transversal direction to the length of the latter, to help direction of water flow and give directionality to it, but also to generate, thanks to the thicker later part of the blade, a strengthening effect and give more rigidity to the blade. In the inferior part, two bars tend to reinforce the area, giving rigidity without increasing weight of the blade too much. On the Turn 151° there are practically no water rails, if not a very low lateral border that helps connecting the blade to the longerons, and that continues to the end of the blade itself.

The choice of the type and mixture of polypropilene has been a long process by Salvimar and has passed by the test of a good number of prototypes, for best equilibrium between softness and reactivity of the blades.

For the technical data sheet of the Turn 151° click here.

They are the Fluyd solution for freedivers, both indoor and outdoor. In fact, many Salvimar-Fluyd athletes, like the mullti champion Andrea Vitturini, have chosen these fins among the 151° family. Salvimar suggests these fins for the Fluyd line as the softness of the flap could, in case of shocks on the rocks during spearfishing action, be more easily damaged.

Also for the Fibra 151° water rails are practically absent.

For complete technical data sheet of the Fibra 151° click here.

They are evidently the top of the line of the 151° fins, thanks to the material, carbon fiber, that can offer best elastic return. The fiber is a K300 Prepreg, as already used on the Boomblast, which guarantess quality, resistance and uniform performance. Evidently, the greatest potential does not necessarily mean best absolute performance, but this we will analyze in the test in the water.

Compared to the Fibra 151°, the Carbo 151° have a smooth glossy surface, which results very attractive.

The greatest rigidity and reactivity of the Carbo 151° compared to the Fibra 151°, and even more to the Turn 151°, has requested the use of small water rails that stabilize the blades and avoid lateral slip.

For complete technical data sheet of the Carbo 151° click here.