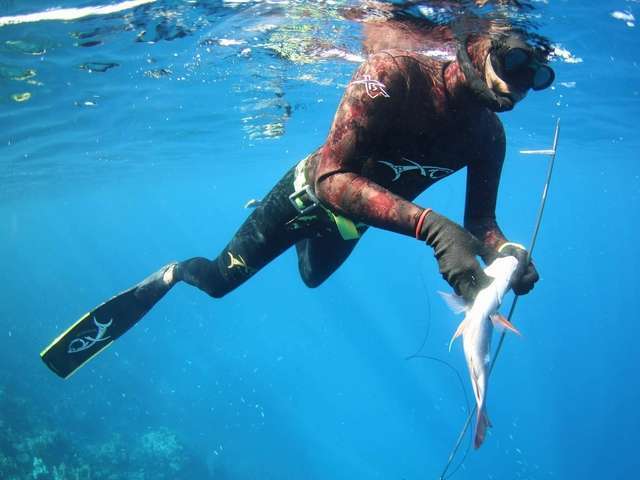 We have tested in the sea the XT Diving Pro T5 fins of the World Spearfishing Champion George Vasiliou.

They are exactly the same model of fins used by the World Spearfishing Champion from Cyprus, George Vasiliou, who in 2016 on the Greek island of Syros has won against athletes from all over the World, spearfishing at amazing depths from 40 to 60 meters; the XT Diving Pro G.Vasiliou T5 are World Champion fins and, considering the field of the competition of last year World Championship, they surely are not afraid of depths. We have tested them in the sea with vertical dives, but also transfers on the surface and gliding underwater, and they have really impressed us.

XT Diving Pro Company is based in Greece, one of the most experienced countries for what concerns spearfishing. Founder of XT Diving Pro is Tasos Chalaris, son of a captain of sea, who has an amazing CV on spearfishing and freediving. Member of the PSA Team and PSA Instructor, Freediving and Spearfishing instructor for Cmas, Lifeguard in sea and pool, ENAK (Hellenic Lifeguard Academy) First Aid & CPR Provider, ENAK (Hellenic Lifeguard Academy), former athlete of the Greek spearfihing Team, with whom he won Champions LEague in 2005, 2007 and 2008.

Tasos Chalaris has decided to use all this experience for freediving courses and freediving schools coordination, but also to design and produce feediving and spearfishing equipment of very high quality. In 1999 Tasos gives birth, together with his friend Giannis Halas, the XXone, Company specialized in designing and manufacturing equipment for freediving and spearfishing. In particular, the company started producing glass fiber fins, but after shifted to carbon fiber and, finally, also added wetsuits. “Attention to details and the capacity to listen to customers’ needs, both freedivers and spearos, has determined the success of our products, not only in Greece, but also abroad“, comments Chalaris.

In 2003 Chalaris begins the study of integration of the two disciplines of freediving and spearfishing, as freediving alone could not cover needs of spearos. After many visits and seminars in nautical centers in Greece and Cyprus, Chalaris managed to define new rules to widen the courses also to thr needs of spearfishing. The final result is the seminar “Adjustment of Free Diving in U/W Hunting“.

XT Diving does not design and produce complete fins, but only carbon fiber blades, as already indicated on the X Rays article published on AP. Foot-pockets are also made in Greece, from Pathos, and are the first ones to be specifically designed for composite blades. The characteristic of such foot pockets is their lightness and the fact that they do not need to position the rubber profile on the blades to connect them to the footpocket. Such connection is obtained through bonding. The sensation of lightness of footpockets and blades is immediately perceptible wearing the T5, while the footpocket is comfortable, but surely more adequate for wide feet compared to long and thin ones, since the design of the footpocket is quite wide.

Before testing fins in vertical dives, we have warmed up with some surface transfers, also considering that much was expected by the T5 on deep dives as their qualities at the World Champ in Syros had been positively confirmed. Quite impressively, the T5 have well performed also in surface transfers, resulting extremely easy and soft. XT indicates the flexion of the T5 as shifted more to the tip of the blade compared to other XT fins, still there is good flexibility and softness also in front of the footpocket, a solution that guarantees comfort also during surface transfers. This is due to the fact that a rigid area in front of the footpocket would determine up and down movement of water without producing any thrust, tireing legs and feet, and making it difficult to keep the fins under the water surface.

Vertical dives is where we expected T5 fins to perform better, and indeed the T5 XT fins signed G.Vasiliou are a step above most competition. In particular, what is perceived is the constant strong push at every kick, with the sensation of having two springs pushing us forward with an amazing strength. All this occurs always with a very comfortable sensation on the legs and at every depth (test has been effected down to more than 25 meters).

The not excessive dimensions in length (64 cm) and width (19 cm) of the XT Diving Pro T5 G. Vasiliou fins make them easily directionable with no risk of hitting one fin on the other during kicking. The lightness of the whole fin make the movement alway easy and light on the legs. On the other hand, lightness of the blade and its great reactivity determine, in some cases, if one moves with a non fluid or even rough movement, a small sound in return when moving along the sea floor or changing direction during the glide. Such aspect can be easily controlled and avoided with the experience in using these fins.

For a deep explenation of the XT Diving Pro fins line, in addition to the T5 G.Vasiliou model, you can watch the video below, where Chalaris explains the characteristics of XT Diving products and helps also in the choice of best fins for one’s needs.