Speed and performance to go deeper and deeper, but what happens if you need to go down “only” maximum 15 meters, and when you need to move easily among narrow passages or between rocks? In Winter fish is mostly in shallow water in many temperate weather coasts and so there is no real need or logic to dive deep. Short fins are more comfortable in the movements among the rocks and in rough sea, and they also have in general better acceleration (but lower speed) than long fins (AP testing). So, in many situations, short fins are definately the best choice!

Let us see three of the best products on the market for short fins, offering solutions with blades in polymer, glass fiber and carbon fiber, for any need and budget.

From the polymer blades of the Cressi Modular Sprint, to the prepreg glass fiber of the Mares X-Wing Apnea S, to the hi quality T300 TW carbon fiber of the C4 Tank T-34, the offer of short fins on the market is complete.

Composite materials can offer greater performance than polymers, even though the latter have improved enourmously in the last couple of years, but indeed increase costs, both for the price of the raw materials and for the greater manufacturing costs where human labor is still today extremely relavant. The range of prices for the fins proposed on-line in this article goes from below 100 € for the Cressi Modular Sprint, to more than 200€ needed for the C4 Tank T-34, up to almost 300€ for the Mares X-Wing Apnea S.

The Cressi Modular Sprint are the shortest of the lot, but also the widest, for 43 cm of length measured from the curve of the blade under the tip of the foot-pocket, and 21.5 cm of width. The C4 Tank T-34 are definitely longer (56 cm), but narrower (19.5 cm), the same value of the Mares X Wing Apnea S, which are though 2 cm longer.

The angle between blade and foot-pocket is 29° for the Cressi Modular Sprint, 30° for the Mares X-Wing Apnea S and 32°, the highest value made by 29° of the blade and 3° of the 400 foot-pocket, for the C4 Tank T-34, with C4 being one of the first companies to move to greater angles since in the past 22° was considered the standard value.

The Mares X-Wing Apnea S have an accentuated dove tail profile flap, while the C4 Tank T-34 have an almost straight profile, with just slightly longer rubber lateral areas, to protect the blade from shocks. The Cressi Modular Sprint instead have a convex solution for the flap. Indeed the Cressi, but also the C4, avoid long lateral extansions of the flap that can determine more likely shocks on the rocks and are more delicate.

Mares has very interesting and refined water rails, with a growing height near the flap, and a lower and costant height moving towards the foot pocket. The C4 have simpler constant height water rails, while the Cressi have very small water rails, evidently thanks to the short blade there is no need for more, directly printed on the fin, so avoiding any glueing, indeed a better solution.

A great novelty are indeed the Mares X-Wing foot-pockets, with an important investment by the Head Group company for a completely new solution, designed with the most recent concept where the lateral rails are short and do not practically influence the bending of the blade. Extremely light, where size 42-43 weighs only 270 grams, made of two materials, where the grey rubber is harder to transmit the push from the foot to the blade, and the black rubber is softer for best comfort and edherence to the foot. The sole is more rigid to avoid liner deformation caused by thrust of the blade and rotation on the longitudinal axis. The Mares X-Wing foot-pocket is designed to be worn also without socks. The very short lateral rails do not need clips for the connection, while the system is kept in position by the traditional double screw to fix the plate. Sizes offered are: 36-37, 38-39, 40-41, 42-43, 44-45, 46-47, to be matched with the bare foot, else with 3 mm socks we must go up one size.

The C4 Tank T-34 fins are compatible both with the 300 or the 400 foot-pocket. The C4 Tank T-34 received were equipped with the 400 foot-pockets. These are molded in traditional thermo-rubber but, thanks to an accurate design, they are extremely efficient and have a weight of only 390gr (for the shorter version). The anatomical “Best” shape makes them comfortable and easy to wear. The foot-pocket is pre-shaped by 3°, which added to the 29° of the blade brings the total to 32°. The lateral rails are extended down to the heel for optimal energy transmission. The connection between foot-pocket and blade is guaranteed by a single screw on a plate. A very interesting aspect it the absence of the clips on the lateral rails thanks to a special connection blade/footpocket with a sort of “hook” connecting to the internal part of the lateral rails. The absence of the clips on the C4 and the Mares fins is very positive as there is no risk of the speargun line getting tangled in them, and also no rick of losing them either! C4 400 foot-pockets are offered in 5 sizes: 38/39 – 40/41 – 42/43 – 44/45 – 46/47.

The foot-pocket of the Cressi Modular Sprint is the well-known solution in thermoplastic rubber in two different stiffness compounds (light grey softer, 65° Shore, and dark grey harder, 75° Shore), with the Self-Adjusting system that perfectly adapts to the foot, especially hosting at best the instep. The new 2021 version of the foot-pocket is designed with thinner lateral rails that influence less the bending and reactivity of the blade. The connection of the lateral rails to the blade is with the traditional clip solution, but specifically redisigned by Cressi. Sizes available are: 36/37 – 38/39 – 40/41 – 42/43 – 44/45 – 46/47. 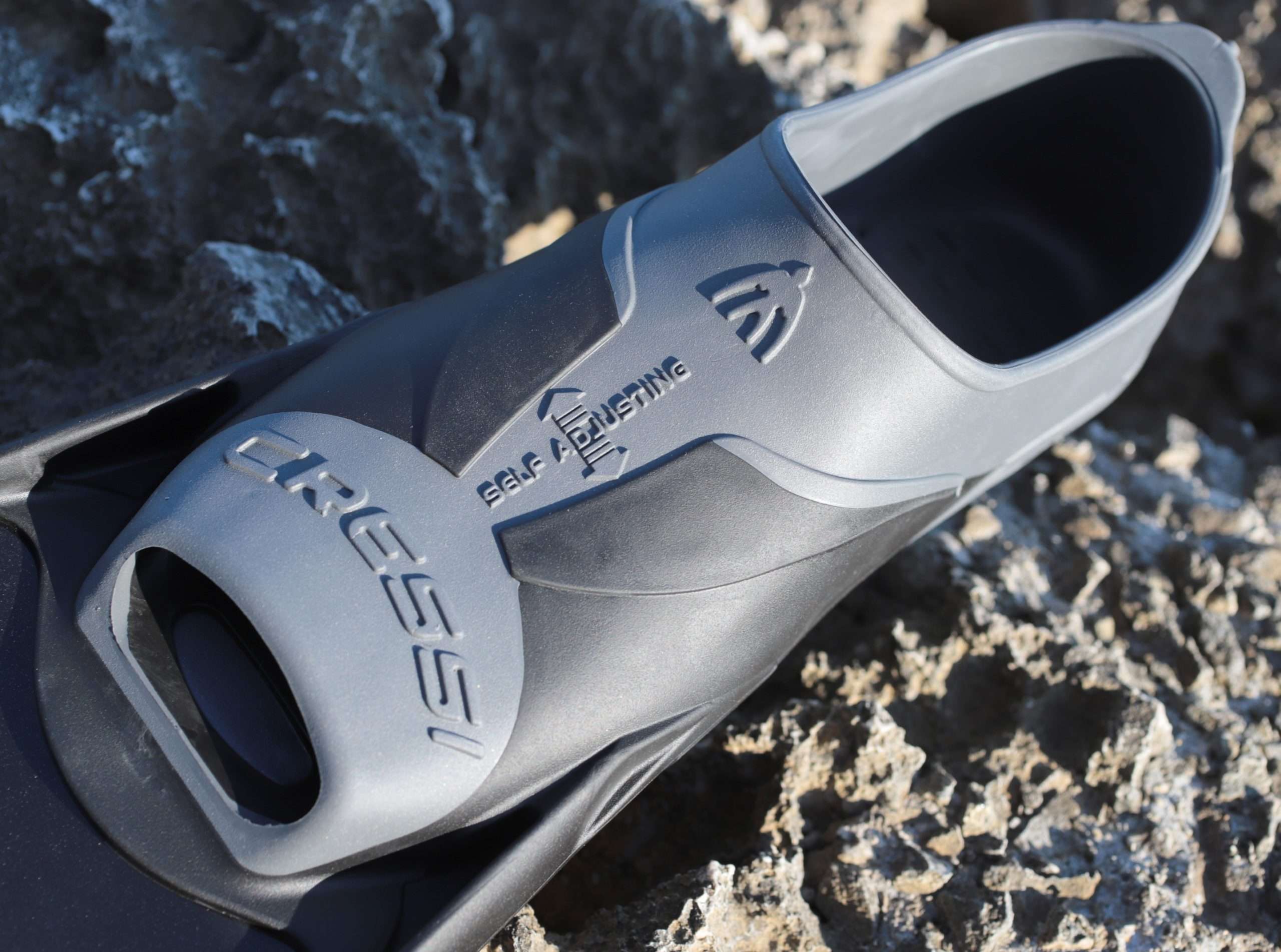 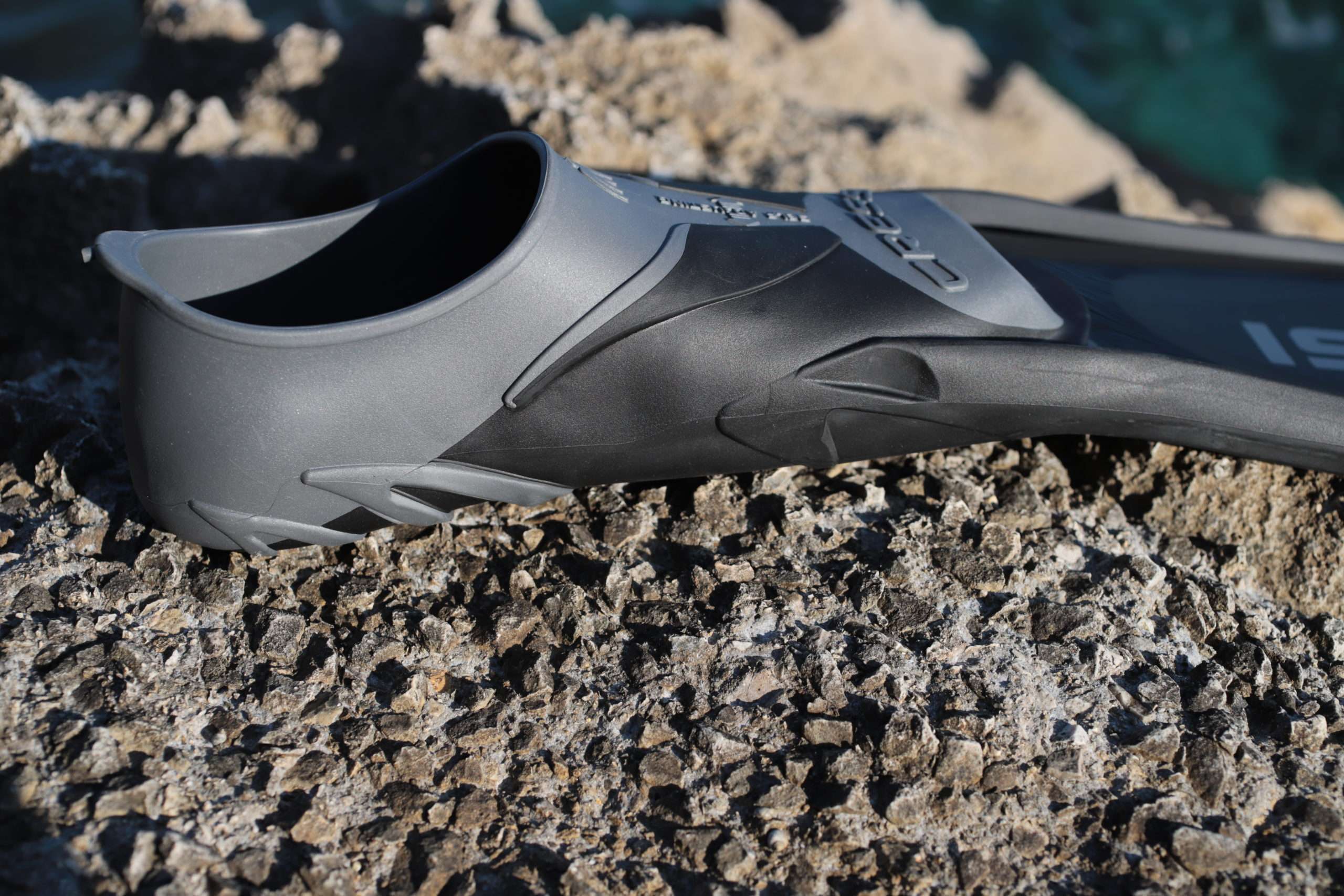 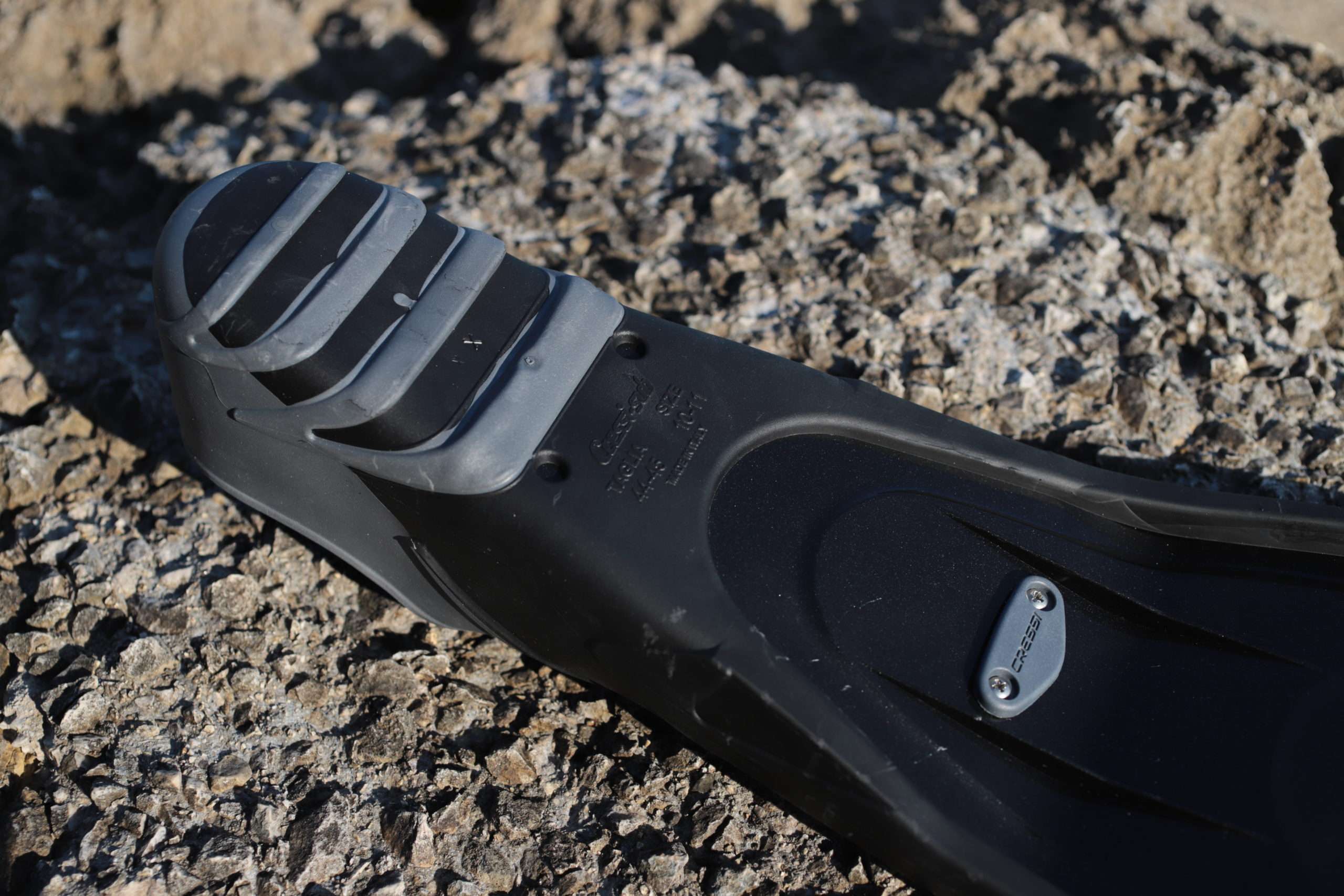 The shorter the fins the easier the swimming between rocks during agguato actions or spearfishing in the dens of the fish. Hitting the rocks with the blades will be less lukily with shorter fins.

Shorter blades generally (AP studies) offer greater acceleration, but lower maximum speed, a little bit like the gears of an engine. So, spearfishing in shallow water among the rocks will definitely need short blades. In general, the idea is to have very short blades for very shallow water, medium length for average dives (10 – 15 meters), and longer for some meters of depth more, but a loss of agility among the rocks.

Different materials have a different resistance to shocks against, for example, the rocks on the sea floor. Polymer blades have a great resistance to shocks and also a low cost in case a subtitution is needed, making them extremely interesting for this kind of use. Glass fiber blades are indeed less resistant, but still are less fragile than carbon fiber. The latter, even though the most resistant material when bending (and the lightest), has more limits in case of shocks as it is more brittle than the other two materials. C4 has applied a great technical solution to prevent the damage of the flap of the Tank T-34, equipping them with the innovative protective rubber edge for the tip produced with the O.P.S. printing system by C4.

Testing of the three different models of short fins will be brought forward in the coming weeks…follow us!