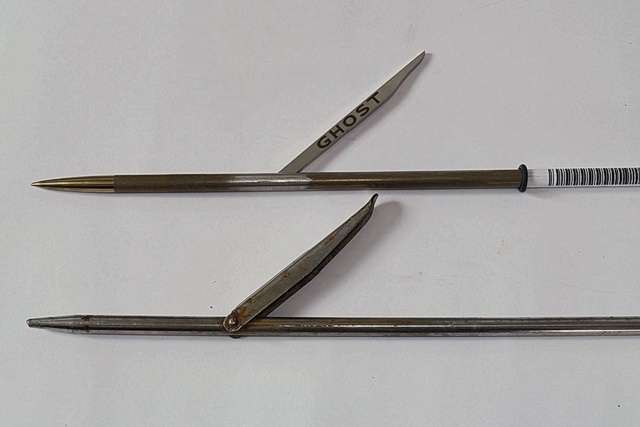 It is no more exactly a novelty, but the Sigalsub Ghost shaft is certainly a revolution, with its amazing penetration qualities.

The advantages of the Ghost, so called due to the capacity of the barb to disappear inside the shaft, are theoretically many, and we leave the list of such advantages to the indications on Sigalsub website.

Certainly, we would like though to better analyze, for the moment theoretically, some of the main advantages, starting from the penetration capacity of the shaft. Let us then make some analysis based on fluid dynamics.

The force Ftot that acts on an object which moves in a fluid, be it gas or liquid, is made of two components: Fa and Fr. Fa is the force generated by friction coming from the viscosity of the fluid, in our case sea water, which acts along all the external surface of the shaft. Fr is the force generated by the fluid dynamic resistance that the point of the shaft encounters when penetrating the fluid it is submerged in.

If the component Fa is practically equal between the traditional shaft and the Ghost, the Fr will depend from the area of the section and the shape of the tip of the shaft. The formula will be:

The shaft has a section whose area is 3.14 • r2, on which, in the case of the external barb, the additional area of this component must be added. This can be done considering the additional area as a rectangle of the width equal to the diameter of the shaft and height of 1.5 mm, and another two rectangles of thickness 1.5 mm and length 5 mm (these are the measures of a classic shaft with totally external barb).

So for shaft of diameter equal to 7 mm:

for a solution with classic external barb, while for the Ghost:

It must also be considered, by the way, that the viscous component Fa of the total resisting force Ftot, grows is turbulence of the fluid along the shaft increases, turbulence that surely the external barb helps to grow compared to the Ghost solution.

All of this makes us clearly understand that the penetration capacity of the Ghost can be greater than the one of a traditional shaft, and so, in theory, help speed and distance reached by the Ghost (with same weight and length), even though final difference will not be great. This aspect is anyway difficult to weigh and transform in effective performance. We will be doing specific practical tests to determine such values.

Going back to the breaking force Fr linked to the frontal section and shape of the shaft, when this hits a solid element, such as the fish, the prevailing force will no longer be the Fa, but the Fr, determined by the element stopping the shaft. The latter will continue along its direction thanks to the inertial force Fi given by the mass of the shaft multiplied by its deceleration.

The formula will be Ftot = Fi, meaning total breaking force = Inertial Force = mass x deceleration (deceleration is linked to speed of the shaft in the momento of impact, which for the Ghost ould be slightly higher than with traditional shafts, but we will not consider this aspect for the moment). So, as we know, the higher the weight, meaning with the same material we will need greater length or diameter, the greater the penetrating capacity of the shaft. But if we do not want to increase the weight, how can we improve penetration anyway? Evidently reducing the breaking force Ftot, that in the moment of the impact with the fish will be mainly given by Fr. This can be done reducing as much as possible the front section of the shaft and making the tip as fluid dynamic as possible. It is in fact true that breaking force, with a big approximation, is given by formula (1) above, that for simplicity we will report once more below:

So it is possible to intervene on parameter S of frontal section, which is well done by the Ghost which reduces such value by around 40%, but not only. Also the fluid dynamic resisting coefficient Cd can be improved. In the below chart it is possible to see how such coefficient varies depending on the shape of an object.

In the case of the tip of the shaft penetrating a fish we can, with big approximation, apply the fluid dynamic coefficient to the shaft. For a number of reasons that we will not here go through, we will assign to the Ghost shaft the parameter Cd = 0.34 of the cone, while for the traditional external barb shaft we will utilize the same value for half of the front section, and the value of the flat disc, Cd = 1.1, for the other half. For the traditional shaft we will consider finally Cd = (1,1 + 0,34)/2 = 0,72. We finally notice that the Ghost shaft, in addition to reducing the front section by 40%, has also an almost halved (approximated) coefficient of penetration . It is clear that the breaking force Ff will be equal to:

since the frontal section and the penetrating coefficient of the Ghost will be respectively reduced by 50% and 60%. This result, in theory, could indicate that the Ghost can be reduced by almost a quarter in its weight to have the same penetration in the fish. Unfortunately the greater part of the resisting force during the movement of the shaft in the fluid is determined by the friction of the water along the length of the shaft. It is though true that with the same speed in the moment of the impact with the fish the Ghost with a weight reduced to almost 1/4 of the weight of the traditional shaft, could have the same penetrating capacity.

All of this evidently makes the Ghost shaft ideal for fishing of big preys, which are difficult to penetrate.

Somehow as downside the Ghost solution could have a lower toughness of the shaft in the area of the barb if compared to a traditional solution. This is due to the fact that that the cut necessary to accomodate the barb (2 mm thick on 6.5 and 7 mm diameter shafts, and recently increased to 2.5 mm on the 7.5 and 8 mm diamter ones, since the greater diameter permits to thicken and strengthen the barb without weakening too much the shaft), creates a weakening of the shaft, greater the smaller its diameter. It is also true though that a shaft has in its external diameter its maximum resistance, while the internal diamter contributes little to the general toughness of the shaft. So, to the contrary of what could be expected, the weakening of the shaft is greater on the side of the cut, and not orthogonally to it.

It must be pointed out that actually all shafts, including the Ghost, tend to have a critical point of breakage in the section where the pin of the barb is inserted. So the Ghost will not really present a risk of breaking in the area of the cut for the accomodation of the barb, but instead a greater possibility of bending in case of a hit on the rocks. To the contrary Sigalsub points out that the pin of the barb has on the Ghost a reduced diameter of 1.9mm compared to the traditional 2.6 mm. This is possible maintaining a good resistance of such component due to the fact that the steel used is of higher quality and handcrafted. This can indeed be a strong point for the Ghost, that will be tougher in the area that is overall the most delicate for shafts, the one if the connecting pin of the barb.

Another point to be analyzed is the possibility of the spring, utilized on the Ghost to help the opening of the barb, could result in being more delicate compared to the traditional solution when the tip of the shaft bends. It is also true that if the shaft bends, as already pointed out, it does it principally in the section of the pin, and not in the rest of the its tip, and so the spring in most cases should not be involved. Anyway, we will evaluate this with empirical tests.

The reduced thickness of the barb of the shaft could also be a point of analysis, as it could cut the fish more than the traditional barb. We must first point out though that the Ghost, due to its circular section with no external barb, not only produces a smaller hole in the fish, but laso will make the hole “cleaner”, meaning that it will not have the external barb to tear the fish when entering into its flesh. In case of un unprecise shot, with the shaft hitting the fish in a soft area or in a perimetral point, the reduced section of the barb could though have a negative effect cutting more easily the flesh of the fish if compared with a traditional barb, which is wider. It is true that the latter will have two thin profiles of the U shaped section, but the total contact area will anyway be greater than with the barb of the Ghost. We will anyway bring forward specific tests to better evaluate such point.

In general, it must be pointed out that the Sigalsub Ghost shaft is very neatly refined, with roundings of the edges to avoid cuts of the line and of the Dyneema wishbone. Also the connecting pin for the barb is so perfectly matched that the border of the pin on the side of the shaft cannot even be seen. Bad luck the edges of the barb are not also rounded, but such solution would increase considerably production costs.

Certainly this First Impressions analysis of the Sigalsub Ghost wants to indicate strong and weak points of this revolutionary product, such as the penetration capacity, mainly in the fish, the hold on the prey and the resistance of the shaft. All these points we will also verify with specific balistic tests. It appears evident that the Ghost, in theory, offers a number of advantages, among which superior penetration capacity in the flesh of the fish, making the shaft from Sigalsub very interesting for most spearfishing techniques, except maybe the one among rocks, where it is very likely that the shaft hits hard surfaces. The absence of the external barb, moreover, can surely increase precision of the shot. It is in fact not by change that in shooting competitions the barb is usually dismounted from the shaft.

Finally, we could summairze the following pros and cons: