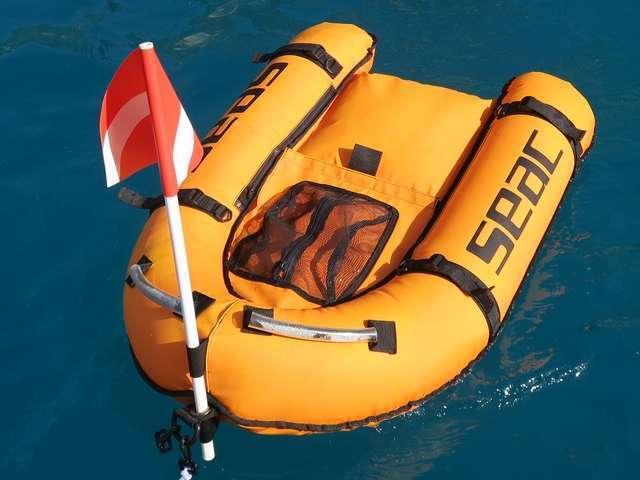 The Seac Bounty is a very interesting PVC float. We have decided to analyze it.

Comfortable for transfers on the sea surface and to carry objects and spearguns, of a nice visible orange colour, the Seac Bounty has axcellent finishings and a PVC water resistant material.

Slightly shorter than one meter and 65 cm wide, with tubulars are of 54 cm circumference (measures partially vary depending on the inflation pressure of the float), the Seac Bounty weighs around 3 Kg with the flag included and its 25 meters long line.

It is one of the first aspects that make the Bounty a very interesting first level product: the material of the float is texture impregnated with PVC, making the Bounty resitant to tear and abrasion and, moreover, water resistant. Both aspects are key for many reasons. Certainly resistance of a product such as the float is extremely important, considering that it can be used starting from the shore, where sand and rocks can rub on the surface of the texture, but also simply the use of the float by the spearo could stress the various stitchings. The water resistance also has two fundamental effects, the first of which the evident fact that the float will dry immediately after being in the sea, somehow like a fabric wetsuit compared to a smooth one. But not only. The PVC solution certainly optimizes the sliding of the float on the sea surface, considering the fact that the Bounty is indeed well designed in the lower part to be hydrodynamic, but the contact area between the float and the water is pretty wide, a fact that determines an increase in friction.

Air chambers are three and independent one from the other, with two symmetrical ones on the lateral tubulars, and a central rectangular one which gives more floating support to the spearo when he is lieing down on the float. High quality zippers, 100% plastic to avoid oxydation, and with special texture bands to stop the zip fastener before end of zip and avoid the first to come off, have the function of permitting to take out the plastic air chambers for fixing or changing.

Pockets are always very useful to position objects, even though there are no water tight ones. The bigger pocket can accomodate a big 2 liter water bottle. The pocket is in fact with PVC impregnated texture cover and velcro closing system, and measures from tubular to tubular (or from tubular to the central rectangular air chamber when measured in the logitudinal direction) 30 x 39 cm (a 2 liter water bottle is around 35 cm long). Such pocket also had two plastic D shaped rings so that objects can be hooked to them and avoid loosing such objects in case of big waves hitting the float and the veltro closing not perfectly positioned.

The second pocket is of smaller dimensions and made with a net and zipper (always in plastic material), with measures 26 x 20 cm, a solution that shows internal content, and avoids water getting stuck in the pocket (situation that occurs with the previous main pocket). Such pocket is used to store objects that do not fear water and has been moved forward to avoid the spearo from lying on the objects when on the float.

Rich with D shaped rings made of plastic for fixing of objects and lines, the Seac Bounty has 4 on each tubular, while at the front there is another of greater dimensions, as on the bottom frontal area where there is a second big one. Smaller are the D rings under the bottom rear of the tubulars, one per side. All D rings are mounted on strong black texture straps.

4 elastic adjustable straps, two on one tubular and two on the other, make it possible to fix spearguns on the float, while two well refined and strong handles, covered with transparent thermoplastic elastomer, which is, according to Seac, more resistant to tear and cut compared to silicone, tubes for safer and more comfortable grip, are positioned on the frontal part of the float and permit to easily carry the Bounty.

For lowest price guaranteed on line price of the Seac Bounty float click here and wait a few moments.