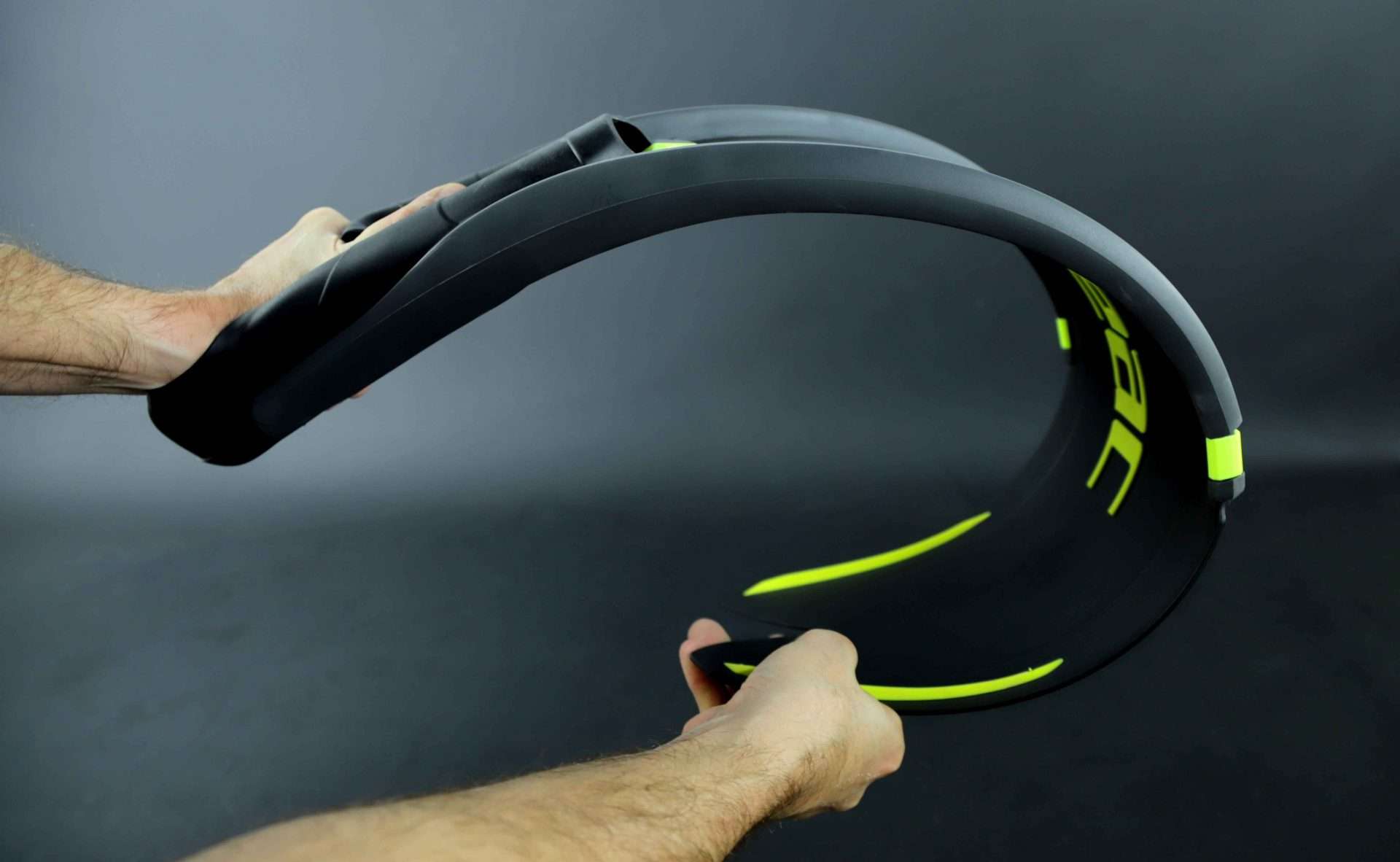 With the strengthening of its polymer department, and the shift to an all in-house production of polymer fins, Seac company leverages on its know-how in this specific sector and launches the Seac Booster fins, attacking the spearfishing (and freediving) market of plastic fins. The 3 different versions, black, green and blu, with the colours that are taken up from the logo, to the water rails to the clips on the longerons and the connection pad on the foot-pocket, make the Seac Booster line particularly attractive. 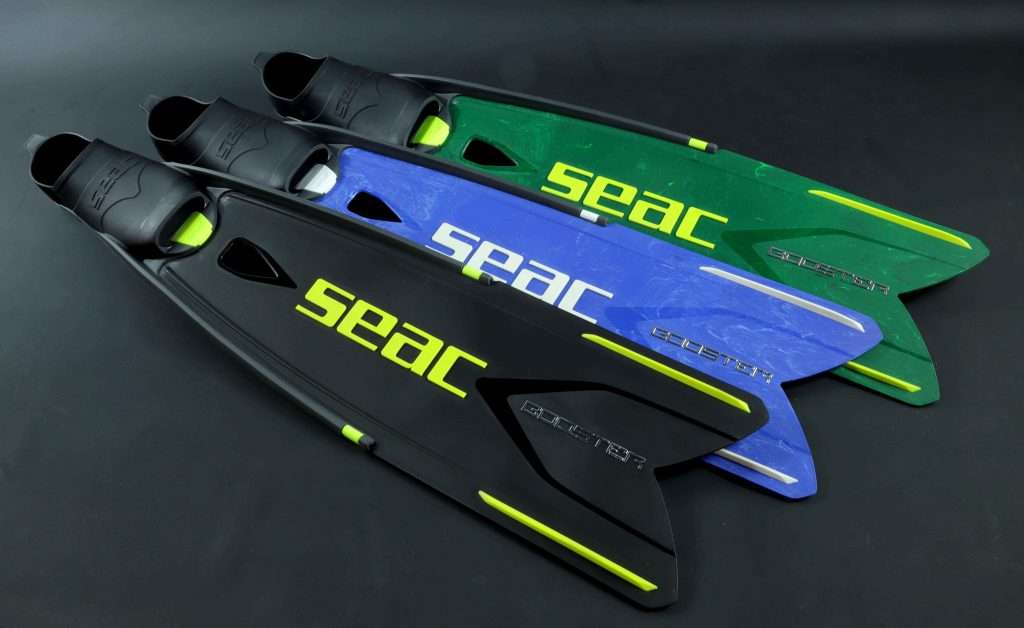 The new polymer used on the Seac Booster blades makes the reactivity of the fin much higher and the resistance extremely consistant. Once again, TPE (thermoplastic elastomer) is used for greater reactivity. The special production process also permits to have, on the coloured blades, blu and green, special camouflage effects which are unique for every single blade. 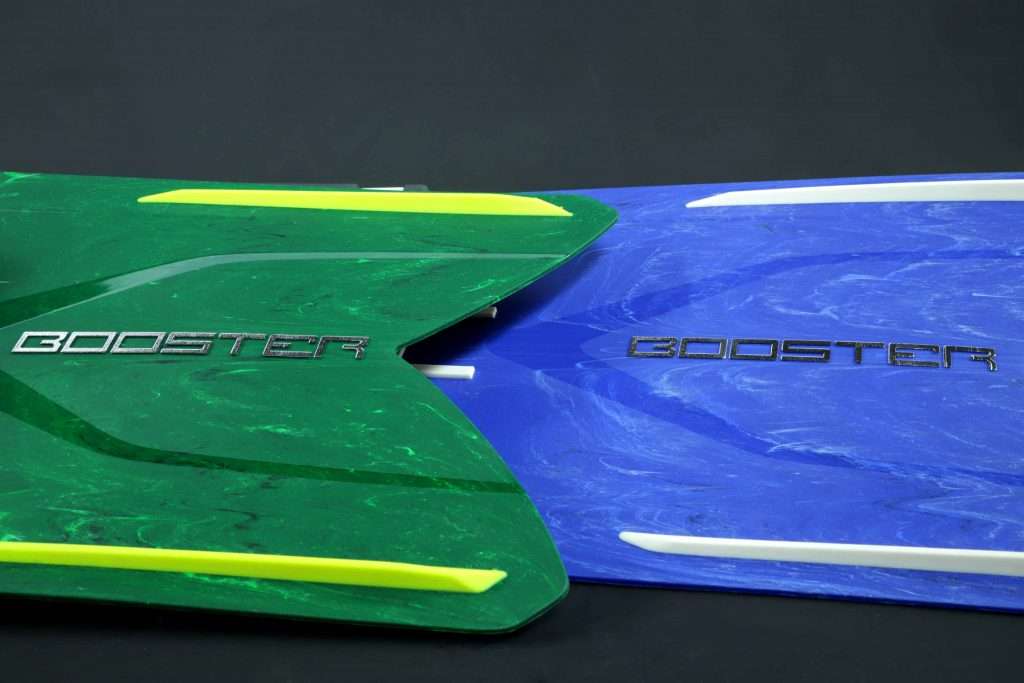 The Seac foot-pocket is excellently refined, in double hardness rubber, 70 shore for longerons and base of the foot (light grey), and 55 Shore for the upper part (black). Moreover, the foot-pocket is complete with differentiated thickness areas, especially on the foot instep, for more rigidity and capacity to transmit force from the foot to the blade. 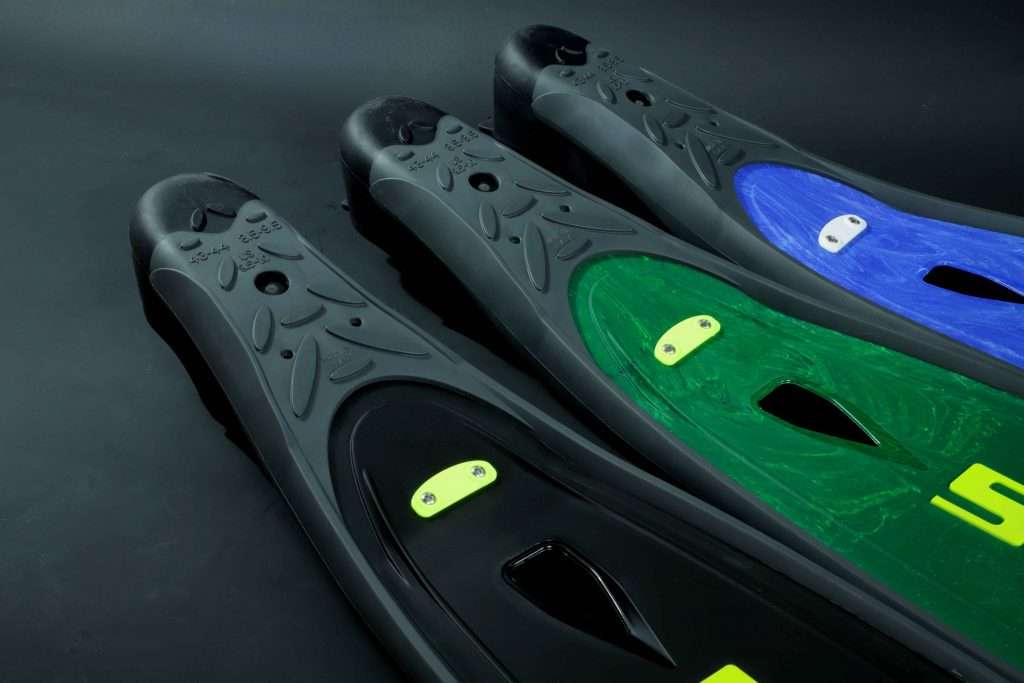 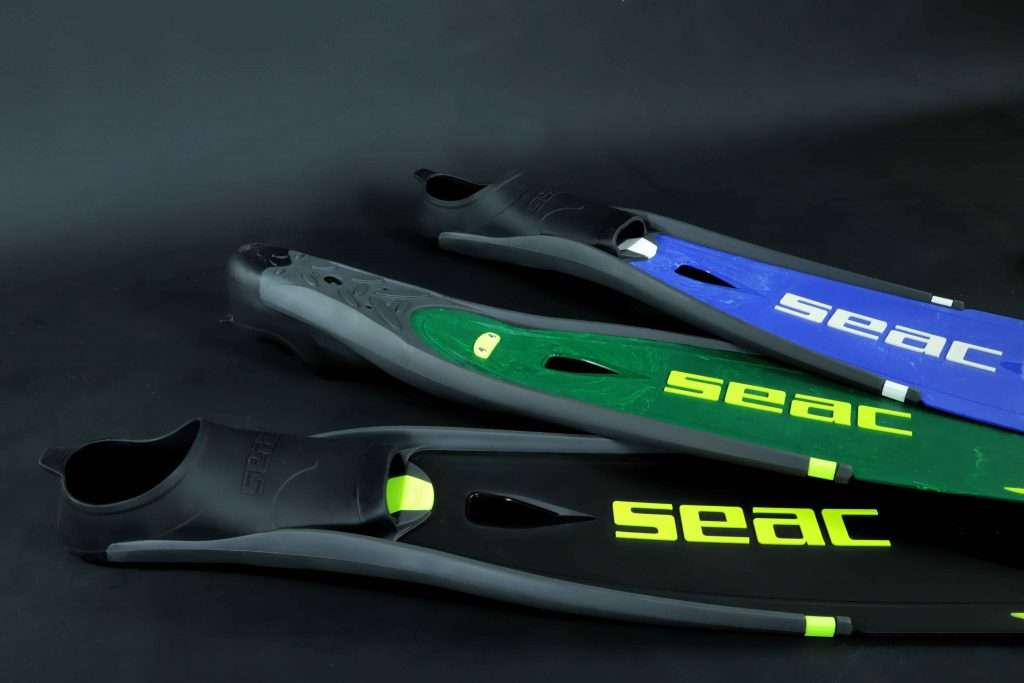 The connection between foot-pocket and blade is the traditional system with plastic pad and two screws, plus clips on the longerons. The colour of clips and pads matched with the ones of the writings on the blade and the water rails makes the look of the Seac Booster pretty neat. 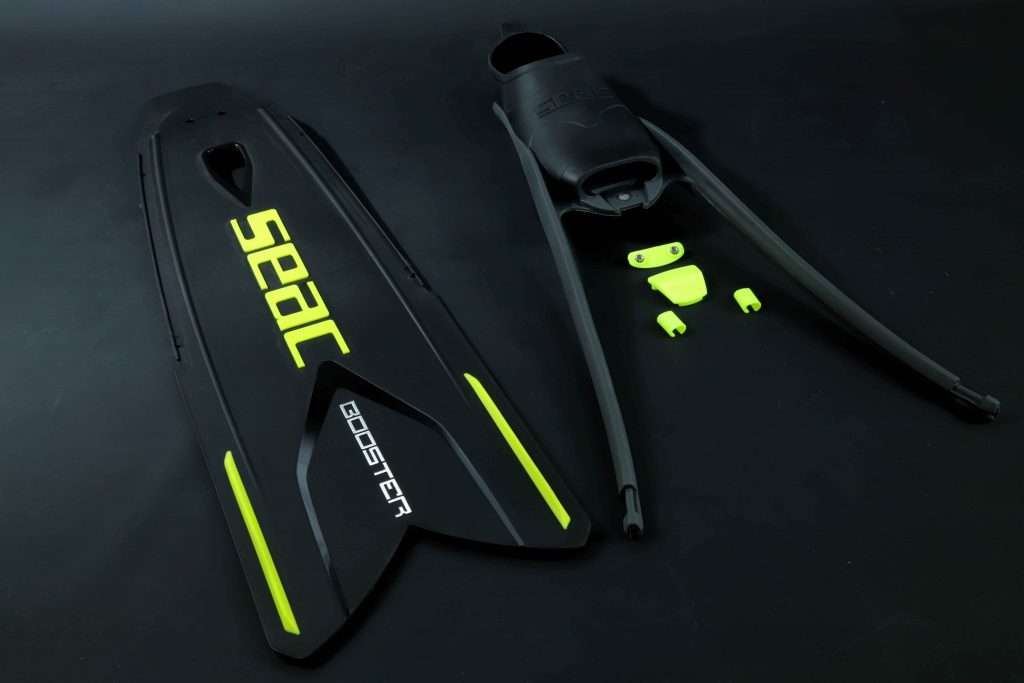 The water rails are made in overmolded rubber on the blade, just as the “SEAC” logo, while the “BOOSTER” naming, silver in all 3 colour versions, is part of the blade. 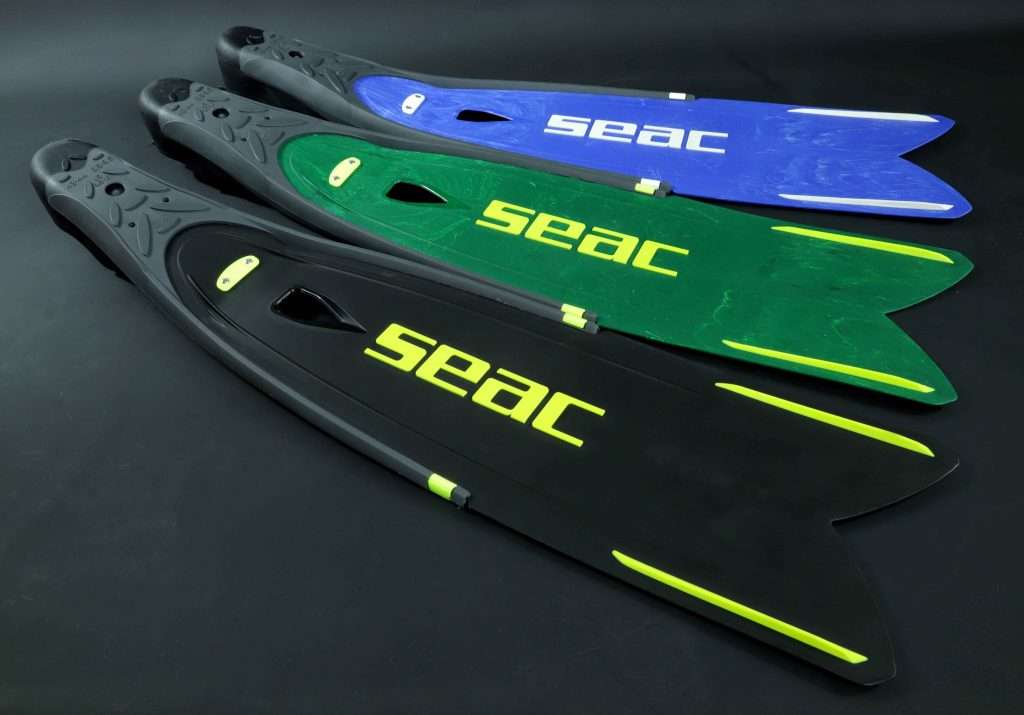 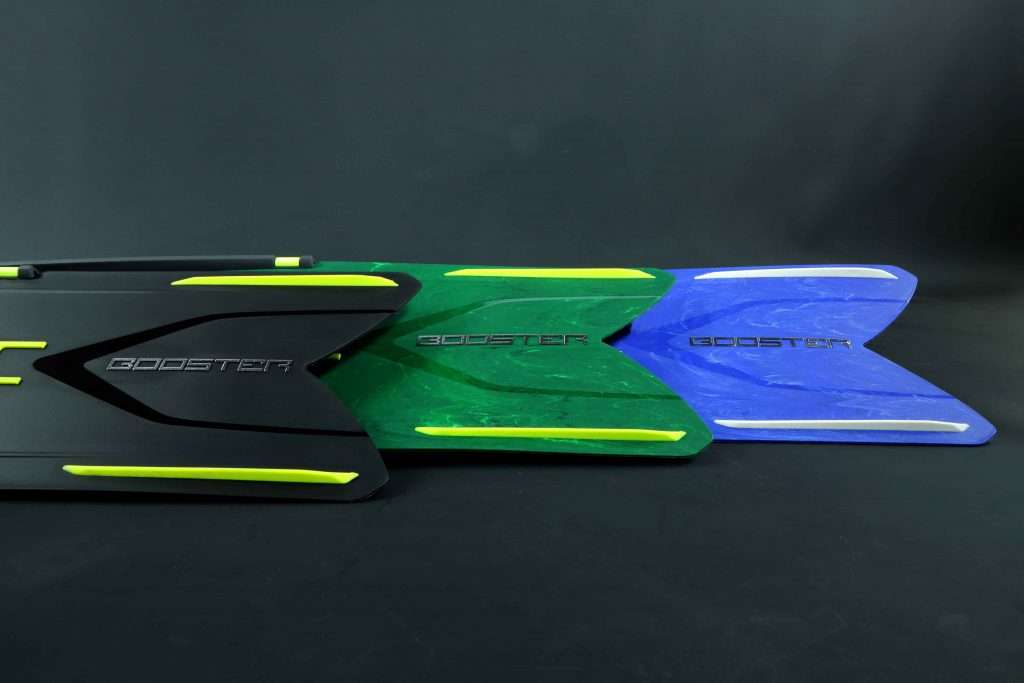 We are happy to notice how Seac in not using plastic, but instead cardboard inserts for the foor pocket storage. Well done! 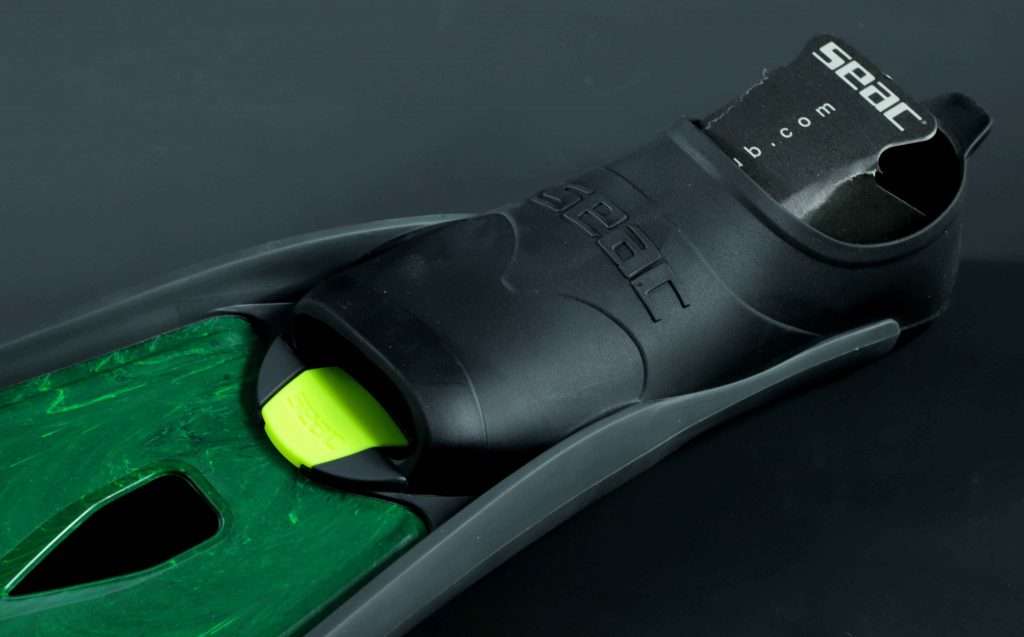 The Seac Booster has a length measured from the curve under the foot-pocket to the tip equal to 55 cm centrally and 62 laterally. In fact, the flap of the blade has a strong dovetail profile, that also helps avoiding the fin to slide laterally when kicking. The maximum width is 18 cm internally to the water rails and 22 cm externally. The water rails are 17 cm long, 5 mm high in their highest point, and 7 mm thick. The presence of four stiffening veins, two in the lower and two in the upper face of the blade. 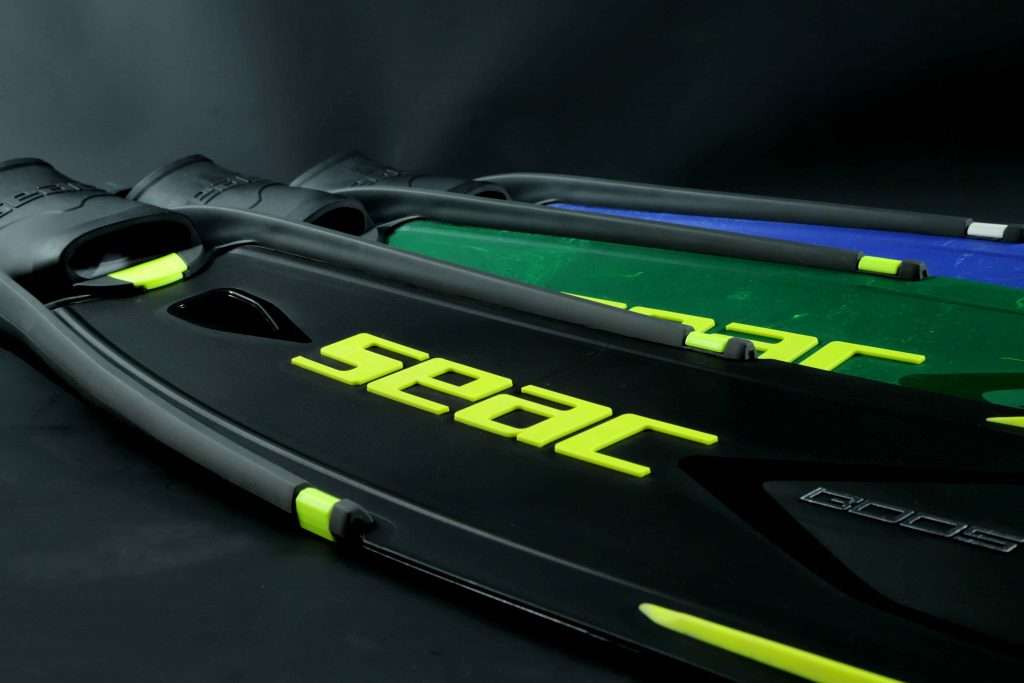 A special feature is the hole on the blade positioned just in front of the foot-pocket. The hole measures 6.8 cm of length x 3.2 cm of width and has a pointed shape. This is an interesting solution, even not new on the market, that helps to reduce the effort of the diver when kicking. In fact, the water moved by the initial part of the blade in front of the footpocket does not really contribute to the push of the fins and so to the movement of the diver. Of course, such solution requires a very good material and design of the blade as the area is the narrower and with the addition of the hole the material of the section of the blade is reduced to a limited amount. 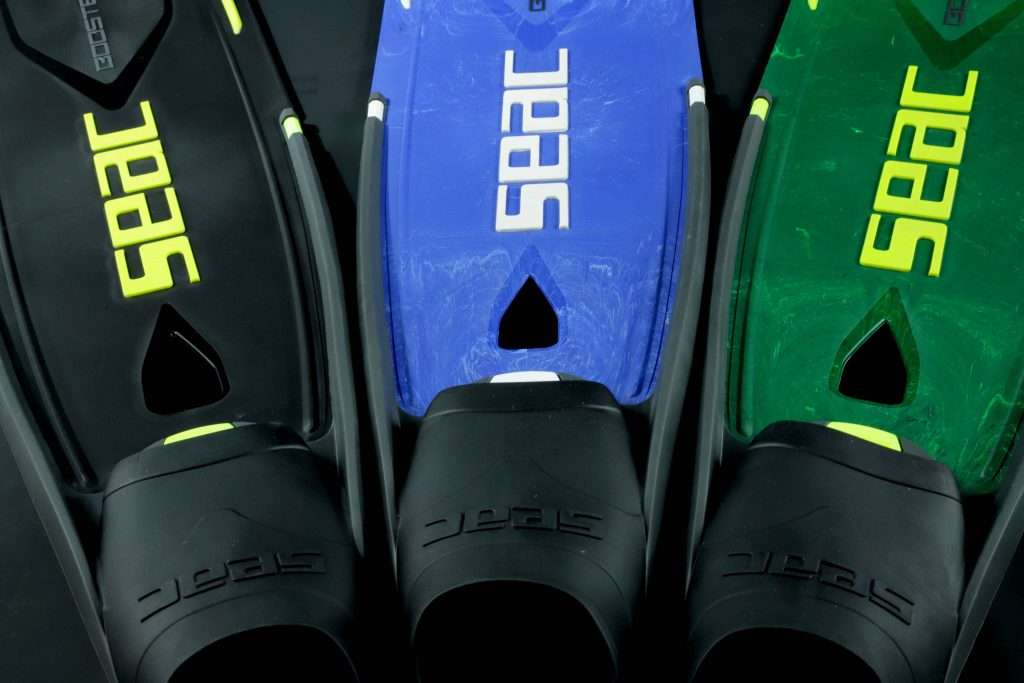 The angle between blade and foot-pocket is the traditional, and easy to use, 22°. The curve produced when bending the blade of the Seac Booster is the modern parabolic solution. 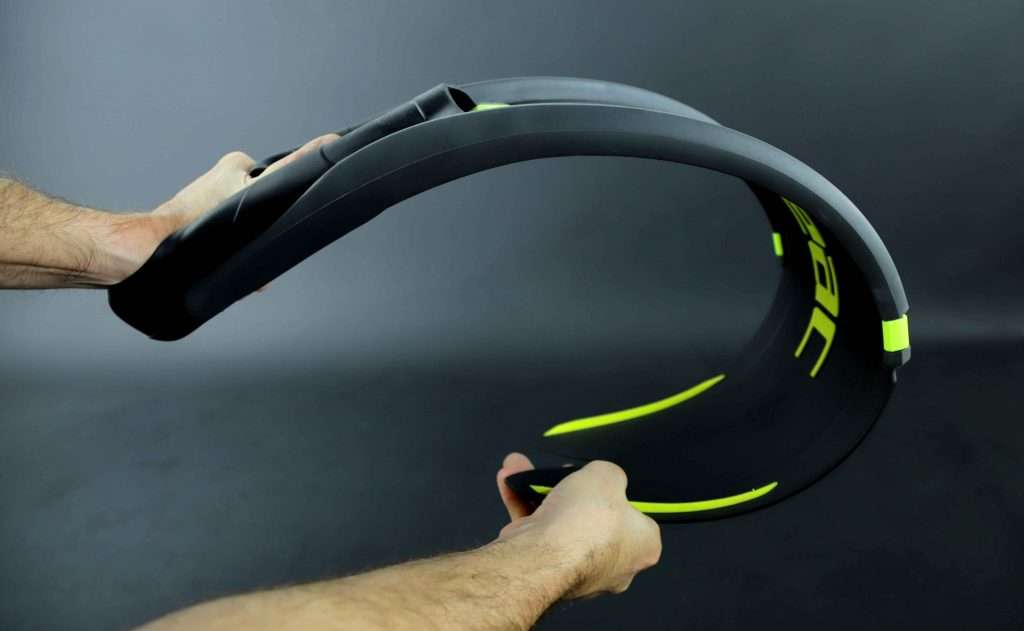