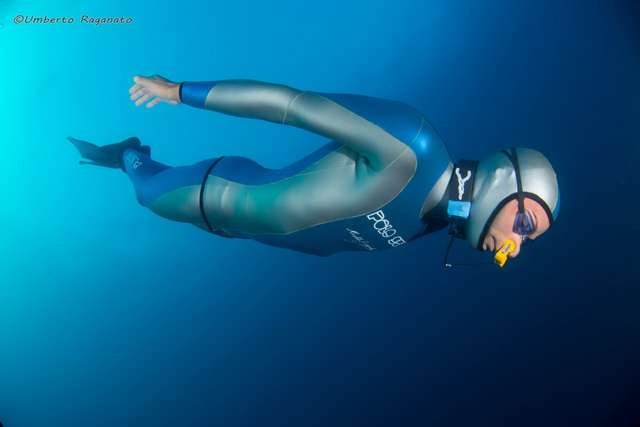 Freediving is growing constantly, and Polo Sub enters the sector with a great Champion: Michele Giurgola.

If things have to be done, they have to be done properly, so Polo Sub, since 20 years (it was founded in 1994) on the market designing and manufacturing tailored made wetsuits, has decided to start a collaboration with one of the strongest athletes in Outdoor Apnea, the Italian Michele Giurgola. The Italian champion in 2015 has won the Gold medal in the constant weight apnea with fins, and the Silver medal both in constant weight monofin and constant weight no fins (CNF). A pity this year at the World Champ in Turkey Michele has has problems with a blocked tuba, that has stopped him from reaching his best performance.

From the collaboration between Polo Sub and Michele Giurgola the 100% freediving wetsuit, with unbeatable softness and comfort characteristics, thanks to low density neoprene and a specific anatomic cut for such discipline, is born: the Recordman.

We have met Giuliano Tagliacozzo, founder, owner and boss of Polo Sub, and have asked him some information on a very neat product.

AP: How was the Recorman born?

GT: It is a product that Michele Giurgola has strongly wanted. He had in mind specific characteristics, to which we as Polo Sub have added solutions coming from our experience, to obtain a very technical product, aimed to pure performance. From here the name Recordman.

PA: Which are the main characteristics of the Recordman and what did you mainly focused on?

GT: The number one objective has been certainly comfort, coming from the low density neoprene (Polo Sub as company line does not communicate the make of the neoprene) and the specific cut for apnea. This wetsuit practically cannot be felt once worn.

GT: It is true, but at very high depths the squeezing of the neoprene cannot be avoided anyway, so we have decided to give priority to the softness and comfort.

AP: In addition to materials, which have been the solutions aimed to optimizing comfort?

GT: First of all the cut, in particular the pre-shaping of the arms which, differently from spearfishing, are kept constantly over the head during apnea.

AP: So it is an extra comfortable wetsuit, but also very delicate?

GT: It is a wetsuit made with top quality manufacturing by Polo Sub, both referred to the bondings and the quality of the neoprene. Still, it must be used to obtain best performance or train for it, while the Recordman must not be used to resist to tears, abrasion or shocks. It must be used for its specific application.

GT: Thicknesses are 3.5 mm for the head, arms and trousers, while the chest and back are 5 mm. Evidently this thicknesses can be changed depending on the request by the customer. Michele has also wanted a differentiated thickness wetsuit, to obtain an additional advantage in the movements and during equalization.

AP: And the external neoprene surface?

GT: It is spread with a product that improves the sliding in the water, a solution that during deep dives can make the difference. The external colors, metallic blu and metallic silver, have been chosen to make the Recordman very recognizable, but they can be changes for example with an all blu or all silver solution.

AP: And for Indoor apnea?

GT: Thicknesses of the Recordman are too high for Indoor, but we are working on new products, with 2 mm thickness externally spread with gliding material and internally super elastic lining, as else the wetsuit would be too delicate. Such products are thought for warm water countries, such as Florida, South East Asia, Dubai, Arabic Gulf, Persian Gulf. We will be next year at the Miami Show with such product.

AP: A final commento on Polo Sub. You sell all over the world, where and how much?

GT: Yes, we absolutely sell in all the world. Italy counts 15%, while in Europe Spain is like a second home and is equivalent to Italy. Also UK, France, Greece and northern countries in Europe are important. the latter are key as the equipment requested is very technical, such as the tailored made wetsuits are, with high thicknesses of the neoprene. Out of Europe we sell in the Arab Penisula, Middle East, Turkey, South East Asia, Hong Kong, Cina, Korea and Australia. We are constantly growing and sell around 4000 wetsuits a year.

AP has then contacted Michele Giurgola, a real Champion, both for his professionalism and capacities in apnea, and for his understatement and open approach with everyone.

AP: Michele, how did the collaboration with Polo Sub start?

MG: As it often happens, just by chance. I have come to know Giuliano at a Blu Camp (annual event in Italy with the champions of Polo Sub, Carbonio GFT and Seawolf). I knew Polo Sub of course, but had never tried their products. I have so been able to try a spearfishing wetsuit and was immediately impressed, as its comfort was at a much higher level than all the wetsuits I had tried since then. There are no air pockets and the precise cut makes movements extremely comfortable.

AP: And after that?

MG: And then I have utilized a Polo Sub wetsuit at the Apnea Outdoor World Champ 2015 in Italy, Ischia island. So I decided I wanted a wetsuit by Polo Sub, but with specific characteristics indicated by me.

AP: So what did you ask for?

MG: First of all a wetsuit which is 100% designed for apnea must be very comfortable especially on the face and neck areas, even accepting to loosen it by some mm, to permit easy ventilation and preparation maneuvers such as the “mouth fill”. Moreover, since there is not weight belt, as all weight is kept on the neck, the tightness of the waist of the jacket must be increased, so water sealing is improved.

AP: And the superficial gliding material spread on the neoprene makes a difference?

MG: I feel gliding speed is greater and so, at high depths, it surely does.

AP: Which other characteristics of the Recordman would you like to point out?

MG: Certainly the preforming of the arms upward creates a great advantage for the classic apnea position, but it is also interesting to see that even arms down there is no wrinkle on the neoprene. Moreover, we have decided to lower the waist of the trousers to take away material, also because the tighter waist of the jacket already was good enough to prevent passage of water.

AP: Which thicknesses do you utilize and which have you used in Turkey?

MG: In Turkey water temperature at the surface was around 22°C, so I have easily used a 3.5 mm all around. Anyway I have also requested a differentiated thickness Recordman with 3.5 mm trousers, arms and face and 5 mm chest and back. Greater thicknesses are not used as in Italy in Winter it is not possible to practice deep apnea.

AP: And the choice of the colors?

MG: Blu evidently comes from the color of the sea, while silver helps a more impactful image. Gold I felt was too “supreme”.

AP: A comment on this year World Champ in Turkey. We know about your problems, but they can happen.

MG: I have had since years problems with my tuba being blocked, but the loss of this year medals have cancelled any doubt in my head and I have decided to be operated. In Turkey I have tried them all, but with the closed tuba I have had no possibility to reach my objectives. Next year I want to be ready for the European Champ.