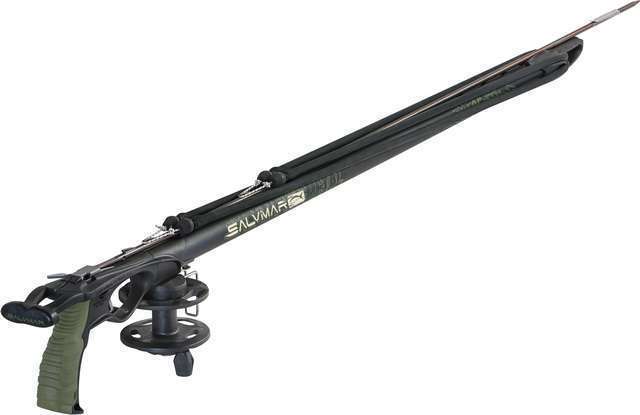 The New Salvimar Metal, with Premium release mechanism, is born.

The New Salvimar Metal sling gun is named after the new grip and release mechanism, the Metal, which has also been mounted on the Sapiens, the top of the line sling gun with carbon fiber barrel, and the Atlantis, with reinforced aeronautical aluminium alloy barrel with integrated shaft guide. With the new handle, also the names of these two sling guns change in Sapiens Metal and Atlantis Metal.

The absolute novelty is the Metal sling gun, extremely attractive from an aesthetic point of view, with the use of black and military green logos and the Nebula graphics, recalling the homonym and revolutionary wetsuit by Salvimar, made with TRD-Skin.

But the heart of the Metal is the handle with its new release mechanism, where the manufacturing quality increases immensely thanks to the M.I.M. technology, Metal Injection Molding, with which even tiny metal components, such as the different elements of the release mechanism and the trigger, are no more obtained through mechanical machining, but utilizing an injection system into moulds, which permits extremely high level precision.

The technical department of Salvimar has decided to utilize the M.I.M technology on as many components as possible among the steel ones of the release mechanism. Well visible is the trigger, which has an amazing design and perceived quality, unbeatable on the market.

To optimize the release system, which is totally made of steel, a small wheel has been added to the release tooth, permitting transformation of friction, from sliding into rolling type, eliminating almost entirely the sliding between surfaces. This solution reduces sensibly friction and permits a lighter and better feel on the trigger, requesting less force on the latter when shooting. Data by Salvimar indicates that the effort on the trigger, considering a load on the shaft and release mechanism equal to 100 Kg, which can be obtained with two 16 mm diameter circular elastic bands, is equivalent to 0.6 Kg, compared to more than 1 Kg in the traditional system.

But this is not all: the solution with the micro wheel reduces by far the wear of the metal components in contact with each other. The tests by Salvimar have evidenced that two surfaces of the same metal sliding one on the other, even though polished and thermally treated, if not oil lubricated, in time tend to seize, to a point that determines a change in the angles of contact and consequently an important increase in the force needed to pull the trigger.

Still on the reliability point and the possibility of maintaining the correct angles between the elements of the release mechanism, the thickness of the steel case has been doubled to 2 mm, so to avoid deformations and shifting of the shafts that block the elements to the case. The case itself has also been reduced in dimensions, meaning the hole in the handle has also been reduced, with the result of having the latter stiffer.

palm of the hand, with the effect of a more versatile grip for everyone.

But novelties are even more, since the reel, named Max Reel, is new and with an impressive design, a great stiffness, with 30% glass loaded nylon, central axle in metal co-stamped with Derlin (great solution, as only Nylon solutions can break in time). Clutch is oversized for greater resistance and possibility of precise regulation. Max Reel can load up to 75 meters of 1.5 mm line.