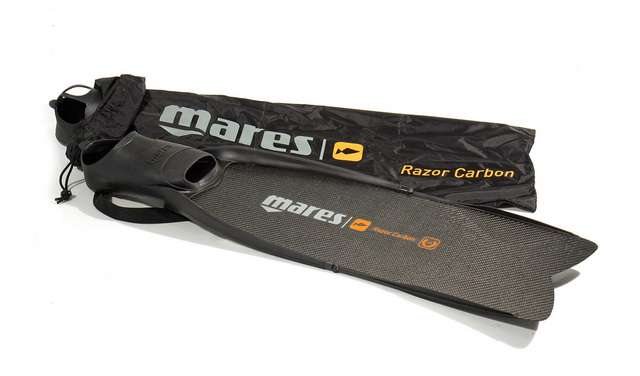 Mares Rasor Carbon fins are of high level, result of deep research and development, plus comparison between 42 prototypes.

They are not recent on the market, as the Mares Rasor Carbon have been launched in 2010, but aready at that time they were precursors both technologically and performance wise. Pre-Preg carbon fiber, manufacturing in vacuum moulds, then positioned in autoclave at extremely high pressure and temperatures, always controlled and in a very slow process. This is how the Mares Rasor Carbon have always offered maximum reliability. To this we must add the performance aspect, obtained after extremely long research on positining and orinetation of the carbon fiber thread, and the attent definition of thicknesses in the different areas of the blade.

Almost perfect in the detail and finishings, with a gloss blade surface of extremely high visual quality, the Mares Rasor Carbon perfectly fit the Mares Rasor foot-pockets, which are very well made, without any imperfection. The glueing of the water-rails to the blade are very good, with only a minimal visibility of glue between water-rail and blades. The “Mares” and “Raser Carbon” writings and the logos are obtained with adhesive bands, which are though glued directly inside the mould, obtaining a fusion of the adhesives with the resin of the blade.

It is the most complex and studied aspect of the Mares Rasor Carbon, where great care and attention has been put on the positioning and orientation of the carbon fibers, their weight and the total thickness of the blade in every area. After deep and long tests, Mares has wanted to empirically select the results of its studies, and so has decided to manufacture 42 different pair of prototype fins and to make them test by a number of athletes, both professional and leisure, of weight between 50 and 95 kg. Test have proceeded along excluding in each phase the least interesting blades, until the best three have remained. The final choice of the best pair of fins among the finalists has focused on one single pair, on which all athletes have agreed upon. The very particular cut of the carbon fiber layers generates two visible shapes on the surface of the tip of the blades, that look like half of a heart each. Such distribution and cut of the layers have been designed, in particular, Mares indicates, to obtain greater reactivity of the tip of the blade.

Also with the Mares Rasor Carbon, AP has proceeded in measuring and weighing all the parts. The length of the blade, measured from the holes for the insertion of the connecting screws of the blade to the foot-pocket, is equal to 61.8 cm on the sides and 58.2 cm in the center, with the difference determined by the dovetail shape of the final profile. These are particularly short blades compared to the other fins analysed by AP: for example the 66 cm of the C4 Mustang, the 62 cm of the Seac Motus FibrexPro (among the shortest together with Mares fins), the 74 cm of the GFT Alpha and the 68 cm of the Pathos Abyss. Certainly in the last years the blades have grown in length, to generate a greater movement of water, but the increased dimensions also represent a greater obtruction during spearfishing. The width of the blade, measured internally to the water-rails, has a progressive increasing value, from 16 cm at the tip of the foot, to 21 cm at the end of the blade.

The blades, exactly with the same weight, have been weighed each equal to 295 grams, while the foot-pocket, size 43-44, weighs 690 grams. The total weight of the fins, including screws and clips, has been measured equal to 990 grams.

AP has also measured, using a Palmer Caliper, the indicative thickness of the blade in three points: in front of the foot pocket, equal to 1.75 mm, at half length, equal to 1.10 mm and at the end of the blade, equal to 0.7 mm.

Still on the dimensions side, water-rails start just after mid blade, as the longerons have great dimensions and direct the flow of water in the first half of the blade. Water-rails are 20 cm long and have a variable height, from 0 to 2 cm, considering the total measure (above and below the blade). Instead of the traditional rectangular profile, the Mares water-rails have a very particular shape, which evidences the great study that is behind their design, with a profile which grows uniformly and quickly on the side of the foot-pocket, and then decreases more slowly on the second part towards the tip of the blade. The angle between foot-pocket and blade is 22°.

Flexion of the Mares Raser Carbon is very particular and in some way it seems to confirm that progressive flexion that Mares points out to be a characteristic of their fins. Practically, even if available in only one hardness, the blades of the Rasor Carbon, Mares says, have a variable flexibility depending on the strength and width of the kick. The blade, very flexible and reactive from half length to its tip, is stiffer in the first part (toes to half length), but anyway it offers always a good general flexibility.

Mares Rasor foot-pockets are excellently designed and manufatured with a synthetic polymer with differentiated thicknesses. The thickness of the instep, with a wide band, and all the base of the foot-pocket, to the lower part of the heel, are designed with a greater thickness, so that all the force can be transferred from the foot, to the foot-pocket, to the blade, without having a great deformation of the rubber. The longerons are among the biggest on the market, with a height of 4.5 m at the tip of the foot. To the contrary of what one might think, considering such dimensions, the longerons are extremely flexible thanks to the soft rubber used, and so have the function of insuring a good connection of the foot pocket to the balde, and of directing the water flow in the first part f the blade, but do not influence too much the flexion of the blade.