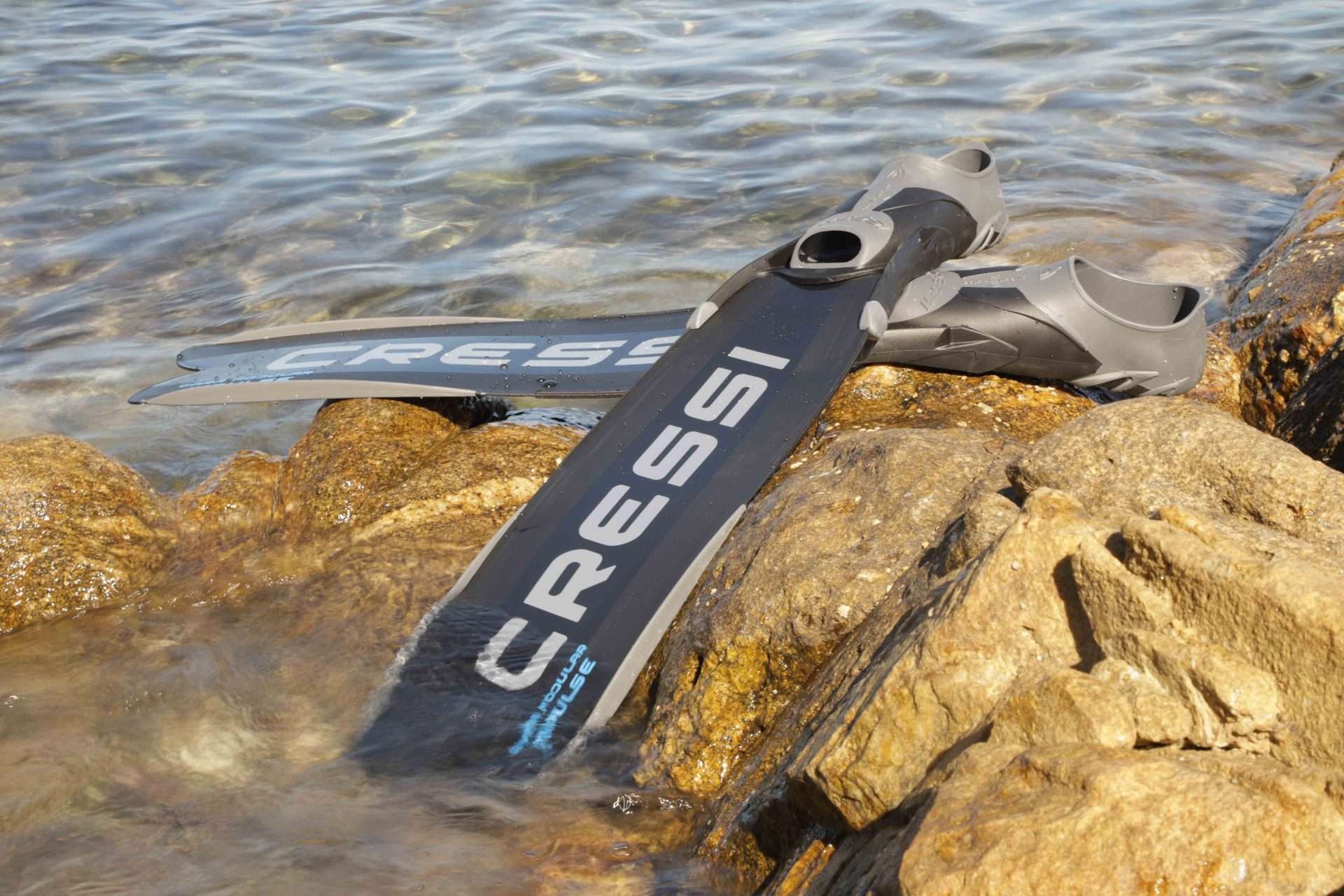 The new Cressi Gara Turbo Impulse fins represent an evolution of the Cressi Gara Modular Impulse. The key element of development is the evolved Turbo foot-pocket, where now the lateral rails are cut short. This is a modern solution to avoid almost any interference with the blade. This is thanks to the fact that the latter are extremely developed and advanced, also in the polymer solution. Let’s see more in detail these new advanced Made in Italy offer by Cressi.

The newly evolved foot-pocket by Cressi, the Turbo, has, as anticipated, much shorter lateral rails compared to the Modular model. This generates a different behavior of the blade, which is now less influenced by the lateral rails of the foot-pocket. At the same time, the new Turbo foot-pocket maintains all the excellent and unique qualities of the Impulse.

It is in thermoplastic rubber specifically studied by Cressi. There are two different stiffness compounds (light grey softer, 65° Shore, and dark grey harder, 75° Shore). The patented Self Adjusting system perfectly adapts the foot-pocket to the diver’s foot, especially hosting at best the instep. In addition, a third material is used to integrate the clips on the lateral rails which secure the blade to the foot-pocket. Such solution is particularly easy to use.

Also, important is the inclusion in the range of the smallest size, the 36/37, up to the size 46/47. In addition, two anatomical insoles, right and left, made in recycled semi-rigid plastic, can be inserted into the foot-pockets. This makes an even better match with the foot. Such solution is excellent also considering the different thickness of the socks used between the hot and the cold season.

One of the key elements of the new Cressi Gara Turbo Impulse is the material of the blade. This is an elasticized techno-polymer compound specifically studied and developed by Cressi. It is extremely resistant to any shock, flexion and stress, making accidental breakage almost impossible. This is one key point also in comparison with composite material blades that, however well made, will always suffer shocks and could break with time. The addition of the elastomer to the polymer compound permits to have previously unthinkable elastic return and reactivity of the plastic blade.

Design and dimensions of the blade

The design of the Cressi Gara Turbo Impulse fins goes even beyond the materials used. The first aspect, still linked to the functioning and bending curve of the blade, is its differentiated thickness design. It all comes from the study of the design of the blade starting from a finite element calculation program. This is an extremely advanced system. The blade not only changes thickness from 4 mm in front of the foot to 2 mm at the tip. The design is much more evolved than that. There are concave areas, not visible with the bare eye.

Such design permits to have an S-shaped double curve, which is today considered the most efficient solution. The S-shaped curve generates a first push and then a second one which result in extremely high propulsion, together with reduced applied force needed and minimal fatigue. On the inferior face the blade has two thin nerves on the external sides that slightly stiffen and strengthen the structure. Under the blade, just in front of the foot-pocket, bigger nerves determine a semi-rigid structure in the most critical area of any blade. This helps to strengthen such area and avoid braking.

On top of this, another key aspect of the design of the Cressi Gara Turbo Impulse is the angle between blade and foot-pocket, which also follows the most modern solution of 29°. This is today considered the best geometry for the most efficient transmission of the force from the foot to the blade. The ankle is relaxed so the comfort is maximum. Also the bending of the ankle has been studied with the finite elements calculation program.

Another key aspect of the design of the Cressi Gara Turbo Impulse fins is the fact that the water rails are one-piece integrated with the blades. They have a specific variable height design for best performance. The length is 29 cm while the variable height goes from 0 to 1.8 cm maximum. They are made of thermo-plastic rubber of 50° Shore, which is soft enough not to influence the correct reactivity of the blade.

The flap has a dovetail design for best control and directionality, avoiding lateral sliding. The blade maximum length measured from the curve under the foot-pocket goes from 63 cm laterally to 59 cm centrally. The maximum width of the blade measured internally to the water-rails is 20.7 cm.

The weight of each blade, including the integrated water rails, is 420 grams, the foot-pocket size 42-43 weighs around 500 grams and the total weight of one fin, including connection screws and clips, is 930 grams. The additional sole weighs 65 grams.

One of the key elements of the blades of the Cressi Gara Turbo Impulse, the variable thickness, permits to have the most efficient bending curve, the parabolic one, which is indeed a great step forward in the polymer blades sector.

All the advanced solutions brought in by Cressi with these new fins seem to lead to a net improvement in performance and a very close situation between the Cressi Gara Turbo Impulse and the best carbon fiber fins on the market. All this, with an amazingly lower price (check the web) and much greater resistance to shocks by the polymer fins.