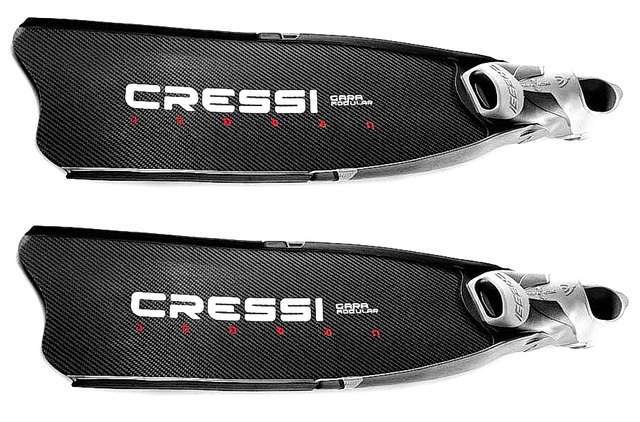 As all carbon fiber products, also the Cressi Gara Modular Carbon fins need a crafted production process. Carbon fiber composite material, which has spectacular mechanical properties (lightness together with extreme resistance and high elastic module) still today has the great limit of needing to be handcrafted. Automotive companies worldwide are investing high budgets to find a technique which could enable them to produce carbon fiber components in an automated industrial way, but there seems still to be a long way to go.

Cressi, is an extremely important 100% Italian Company that has resisted the process of being bought by bigger international groups, as has happened to Mares and Omer for example, and is still today producing in Italy. In 2016 Cressi has celebrated the 70th year of its great history; a history made of innovation and revolution in the product, main examples of which are the first mask which incorporated the nose inside the facial, the Pinocchio, still on the market today, or the Rondine fins, the first ones with integral footpocket, eliminating the rear lace, then evoluted in the Rondine L, the first fins with long blade. Still on the fins side, with a patent, Cressi has been the first company to design double hardness rubber footpockets, aimed to improve performance and comfort.

Along the years Cressi has aimed more and more towards automation of its production, which permitted ripetitiveness, meaning constant high performance and reliability of products. Nevertheless, Cressi has in its fins range carbon fiber fins, the Gara Modular Carbon, that evidently follow production processes, at least for the blade, that are craft. Still, even though automation is not possible, Cressi has kept high the other standard of its production, quality and reliability.

The visual quality of the Cressi Gara Modular Carbon is very good, with the footpocket excellently manufatured, with bicolour rubber indicating the two hardness materials. The blade is glossy and presents some tiny areas where resin seems to be missing creating small empty spaces almost all over the surface of the balde. This aspect is dew to the special manufacturing system and the aim of utilizing the minimum quantity of resin, which is laso the heaviest part of the composite material. This solution does not reduce reliability of the blade, and Cressi underlines the practically total absence of returns of any fins from the customers.

Water rails are glued very well to the blades, with minor ares where some glue can be seen, while the cut of the water rails on the side of the longerons is not 100% perfect, but of course this does not influence performance at all. Matching of the footpocket to the blade is perfect. The writing of “CRESSI GARA MODULAR CARBON” is printed and covered with a last layer of resin, that protects it. Final feeling of the surface on the writings is a little rough, and final result is just slightly lower than best solutions on the market.

The lamination process, meaning the positioning of the layers of carbon fiber in the molds, is the patented one utilized in the world of ultralight planes, where evidently quality and reliability are the main objective. Molds are made of glass, in vacuum and positioned inside autoclave at high pressures and controlled temperature.

The thickness of the blade is obtained utilizing sheets of carbon fiber with greater diameter of the thread, instead of using a higher number of thinner layers. Cressi in fact states that this solution reduces tensions in the final product, improving reliability and resistance in time, reducing significantly the phenomena of the enervation of the fiber. Such thickness of the thread determines the microscopic holes distributed on the surface of the blades.

Another important solution by Cressi is the use of a Kevlar in the area of the screws that connect the blade to the footpocket. Kevlar is much less reactive elastically than carbon fiber, but it is also much more resistant to fracture, and in fact it is used to manufacture bullet proof jackets. Such solution, Cressi indicates, reinforces consistently the blade in the area where the screws are mounted, and generally a weak point, easier to break.

Also for the Cressi Gara Modular Carbon, AP has proceeded in measuring dimensions and weights. The length of the blade, measured from the holes of the screws for the connection of the blade to the footpocket, is equal to 63 cm laterally and 61 cm centrally, with 2 cm difference due to the dove tail final profile of the blade. Such blades are quite short, as the Mares Rasor Carbon and the Seac Motus FibrexPro, while greater are the 66 cm of theC4 Mustang, the 74 cm of the Carbonio GFT Alpha, the 68 cm of the Pathos Abyss and the 76 cm of the Alemanni Speedy, the longest of all. Certainly in the last years the blades have grown in length to generate a greater movement of water during finning. but the increased dimensions are also a greater obstacle in movements when spearfishing. The width of the blade, measuring internally to longerons and water rails, grows quickly from 14.5 cm in front of the foot, to 21 cm well before mid blade to the end.

The blades, perfectly identical in the weight, have been weight equal to 275 gr. very light, confirming that the process of lamination with reduced resin aimed to lightness. The footpockets, size 42-43, weigh 540 grams each, also these being pretty light. The total weight of the fins, including clips and screws, has been measured by AP equal to 830 grams, positioning the Cressi Gara Modular Carbon second lightest just behind the Pathos Abyss (730 gr).

AP has also used a Palmer Caliper to measure the indicative (since it varies along the blade) thickness of the blade in three points: infront of the foot, with value euqal to 1.40 mm, at half length, equal to 0.85 cm, and at the tip of the blade, equal to 0.55 mm, meaning quite low values of thickness.

Always concerning dimensions, water rails start from just before mid length of the blade, from the end of the quite big longerons, that help channeling the water flow. Water rails, of simple shape, are 30.5 cm long and have a constant height equal to 1.9 cm, considering total hieght (over and under the blade). Angle between blade and footpocket is equal to 22°.

Flexion of the Cressi Gara Modular Carbon is quite important from half blade to the end, while the first part is much stiffer. This is true for the black (carbon fiber) colour blades, which Cressi indicates as soft, while the camouflage ones are indicated harder, as medium stiffness. Reactivity of the blade is extremely good.