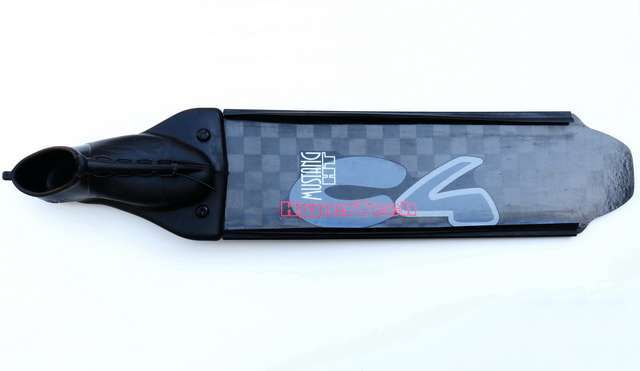 The C4 Mustang HT fins are the most technical of the C4 line and designed for deep vertical dives.

We have already tested them, but C4 has kindly sent them to us for a deeper analysis and for, to follow, a test in the sea. As confirmed from the Company, the Mustang Ht are designed and thought for deep vertical dives, meaning deep and challenging spearfishing, and posses all the most innovative technical solutions by C4, carefully patented. The last novelty, which gives the fins their second name, HT, is the “Big Square” TR50 Pre-preg carbon fibre.

The C4 Mustang HT are unique starting from the anatomic and patented foot pocket, which permits, by the way, to have a constant width blade, from the tip of the toes to the end of the blade, which has an accentuated convex profile (flap). Such shape aims to optimize the water flow, moving the maximum quantity of water starting already from the tip of the toes. EVO water rails are also unique, and patented, with variable height and curved profile towards the inside of the blade, so to create a partial tunnel effect that channels better the water. C4 has also moved from matt surface and T700 fibre, which C4 indicates as already Pre-Preg (but never communicated before), to the glossy TR50 Bid Square Pre-preg fiber, now officially communicated. The glossy solution is nice, but visually not at the level of some carbon fiber blades of the competition, since it appears a little bit with an orange peel look.

The shape of the layers of carbon fiber of the C4 fins has always been kept very secret and C4 again does not unveil much. The surface of the blade does not show particular shapes of the layers, showing a uniform distribution of the big squares of the TR50, which have a side of 2.5 cm. Lamination, meaning the laying of sheets of carbon fiber, is done positioning them (up to 8 layers in the thickest areas) in steel moulds, and processed at high temperature (120°C) and pressure (8-9 atm).

The particularity of the Mustang is surely the constant width, which offers the maximum canalization of the water, a solution possible thanks to the anatomic foot-pocket by C4. Also the EVO water rails are very innovative, with their variable height and the curved profile towards the internal part of the blade. The final profile of the blade is extremely convex (flap), a design that C4 indicates to improve the reduction of turbulence generated by the water lines sliding along the blade.

AP has used a Palmer caliper to measure the thickness of the blade in three points along it: in front of the foot pocket, equal to 1.49 mm, a mid length, equal to 0.80 mm, and at the end of the blade, equal to 0.65 mm.

Always on the dimensions side, the water-rails are of variable height, starting from 1 cm on the side of the foot-pocket, growing up to 2.9 cm and then going back to 1 cm, while their length is 54 cm.

The weight of the blades, water rails included, has been measured equal to 430 gr, identical for the two blades, an important point indicating the quality and precision of construction.

The angle between foot-pocket and blade is equal to 29° (C4 data), which sums to the 3° curve of the foot-pocket, that has the natural profile of the foot when fin- kicking, bringing total angle to 32°.

The flexion of the blade analyzed out of water shows a very high rigidity, but not excessive. It must be considered by the way that the fins tested are value 30, on a scale of 25 (soft), 30 (medium) and 40 (hard). The reactivity of the material is really impressive. The curve made by the blade when bent shows a uniform angle along the balde, even though C4 talks about a Double Parabolic Curve (DPC), which is more probably evident during fin-kicking in the water.

We are talking about a unique design at a worldwide level, with the anatomic foot-pockets with left and right solution, a study by C4 that had made history in the world of freediving and spearfishing fins. The regulation system on the foot is made by elastic bands and the connection between blade and foot-pocket is obtained with two screws, positioned at greater distance than usual, thanks to the greater width of the blade in front of the toes, while there are almost no longerons, so that the blade can work freely from the tip of the foot to the end. The material of the foot-pocket is natural thermo-rubber, more resistant to temperature changes, especially from a constancy in hardness point of view. The various zones are designed with differentiated thicknesses to have more rigidity in the areas of transmission of the movement of the foot to the blade. The weight of the foot-pocket is quite important, and measured equal to 710 g.

Click here for the data chart of the C4 Carbon Mustang HT fins.